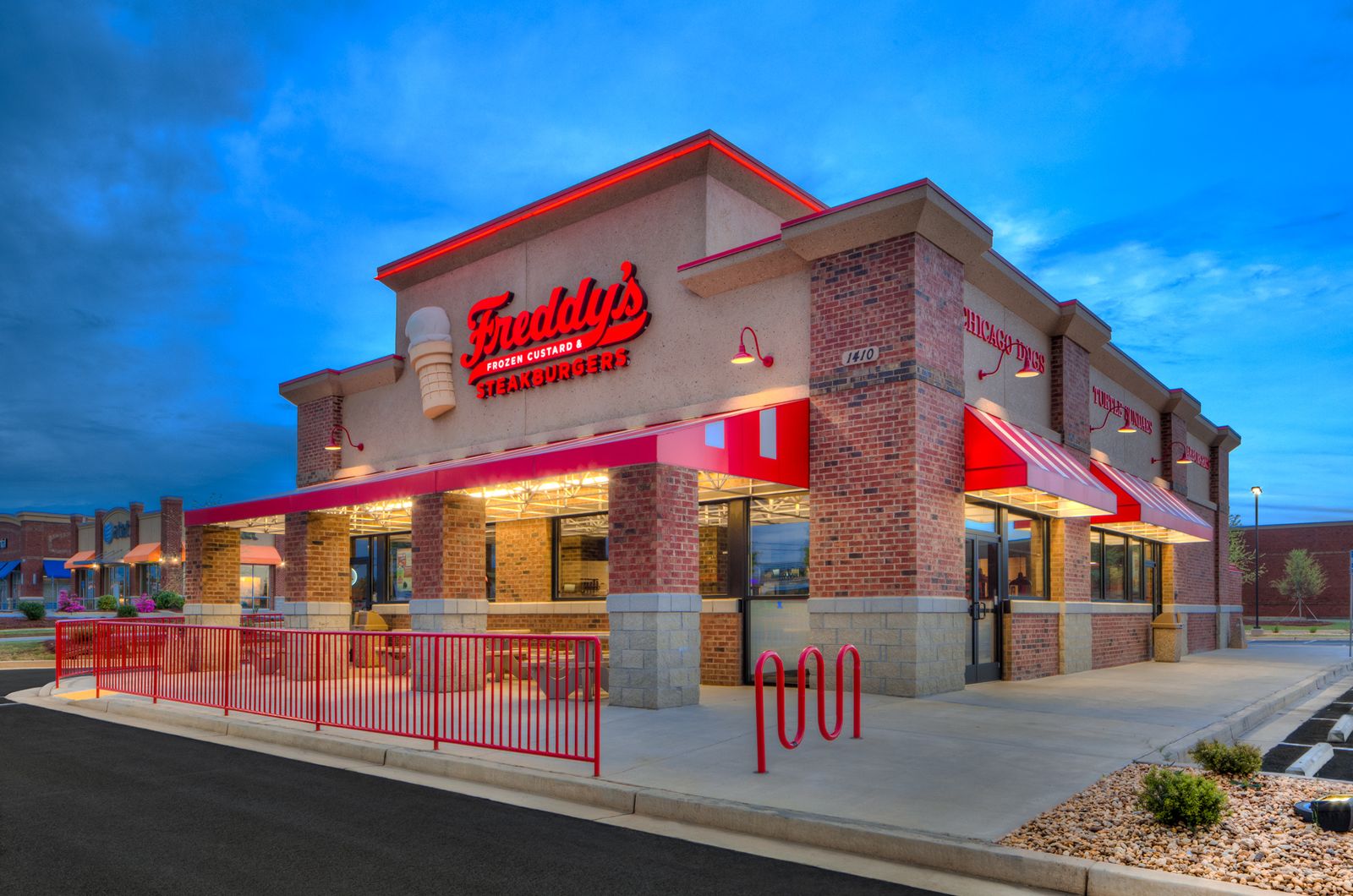 Wichita, KS  (-)  Leading fast-casual restaurant concept Freddy’s Frozen Custard & Steakburgers announced today it has experienced significant development nationwide throughout the second and third quarters of 2021, including the opening of its first restaurants in New Jersey and Wisconsin. With these new locations, the rapidly-growing brand now has a presence in 34 states and is slated to continue expanding its footprint with a strong pipeline fueled by continued franchise development success. In addition to these milestone restaurant openings, Freddy’s has announced the recent signing of five development deals with new and existing franchisees to bring 30 units to key target markets across the U.S., including Texas, Louisiana, Indiana, North Dakota and the greater Chicagoland region.

The Freddy’s franchisees spearheading this development and their growth plans include:

“The recent openings and new development  agreements show the continued excitement and interest that operators have in the Freddy’s franchise opportunity. We’re very excited to welcome these new restaurants and franchisees to the Freddy’s family and look forward to further expansion,” said Andrew Thengvall, CDO of Freddy’s Frozen Custard & Steakburgers.

In addition to Freddy’s continued franchise development, the brand’s debut in New Jersey and Wisconsin in early August was a tremendous success. Since opening, both new restaurants have experienced continued high traffic and popularity within the community, demonstrating the excitement of Guests welcoming the brand into their hometown. The Linden restaurant is owned and operated by Ethan Coleman,  the New Jersey Steakburgers LLC franchise owner. He intends to develop dozens of Freddy’s restaurants in markets across Northern New Jersey over the next several years. The Appleton Freddy’s is owned and operated by brothers Chad and Nick Sternitzky, who plan to develop eight additional Freddy’s restaurants throughout the state, targeting areas like Madison and Green Bay.

“The success our New Jersey and Wisconsin franchise owners have experienced since opening is a true testament to the coast to coast acceptance of our brand, and we look forward to welcoming new candidates looking to bring a one-of-a-kind fast casual concept to their community,” added Thengvall.

Freddy’s has experienced a continuous surge in franchise development, opening more than a dozen new restaurants in the first half of 2021 alone, including locations in Boise, ID, Memphis, TN, and Pensacola, FL, and the brand is expected to open 30 more before the end of the year. Franchise opportunities remain in areas across the U.S., including the Northeast, Upper Midwest, California, Florida, Oregon, and Washington and large metro areas such as Pittsburgh and many of its surrounding markets.

For more information about development opportunities, contact Mary Coots, Director of Franchise Development, at maryc@freddysusa.com or 316-719-7854, or visit www.freddysfranchising.com.

Co-founded in 2002 by Scott Redler and Bill, Randy and Freddy Simon, Freddy’s opened its first location in Wichita, Kansas, offering a unique combination of cooked-to-order Steakburgers seasoned with Freddy’s Famous Steakburger & Fry Seasoning®, Vienna® Beef hot dogs, shoestring fries paired with Freddy’s Famous Fry Sauce® and frozen custard that is freshly churned throughout the day. The brand was acquired by private equity firm Thompson Street Capital Partners in March of 2021. Today, Freddy’s has grown to more than 400 locations that serve 34 states across the nation from California to Pennsylvania, Virginia, down the East Coast states to Florida. Freddy’s has been named No. 1 on Forbes Best Franchises to Buy, The 2021 Restaurant Business 10 Fastest Growing Chains in the U.S. List, Entrepreneur’s 2021 Franchise 500 top 100, Franchise Times magazine’s 2020 Fast & Serious top 40 and many other nationwide and local industry awards. For more on Freddy’s, visit the Newsroom and follow us on Facebook, Twitter and Instagram for the latest news.