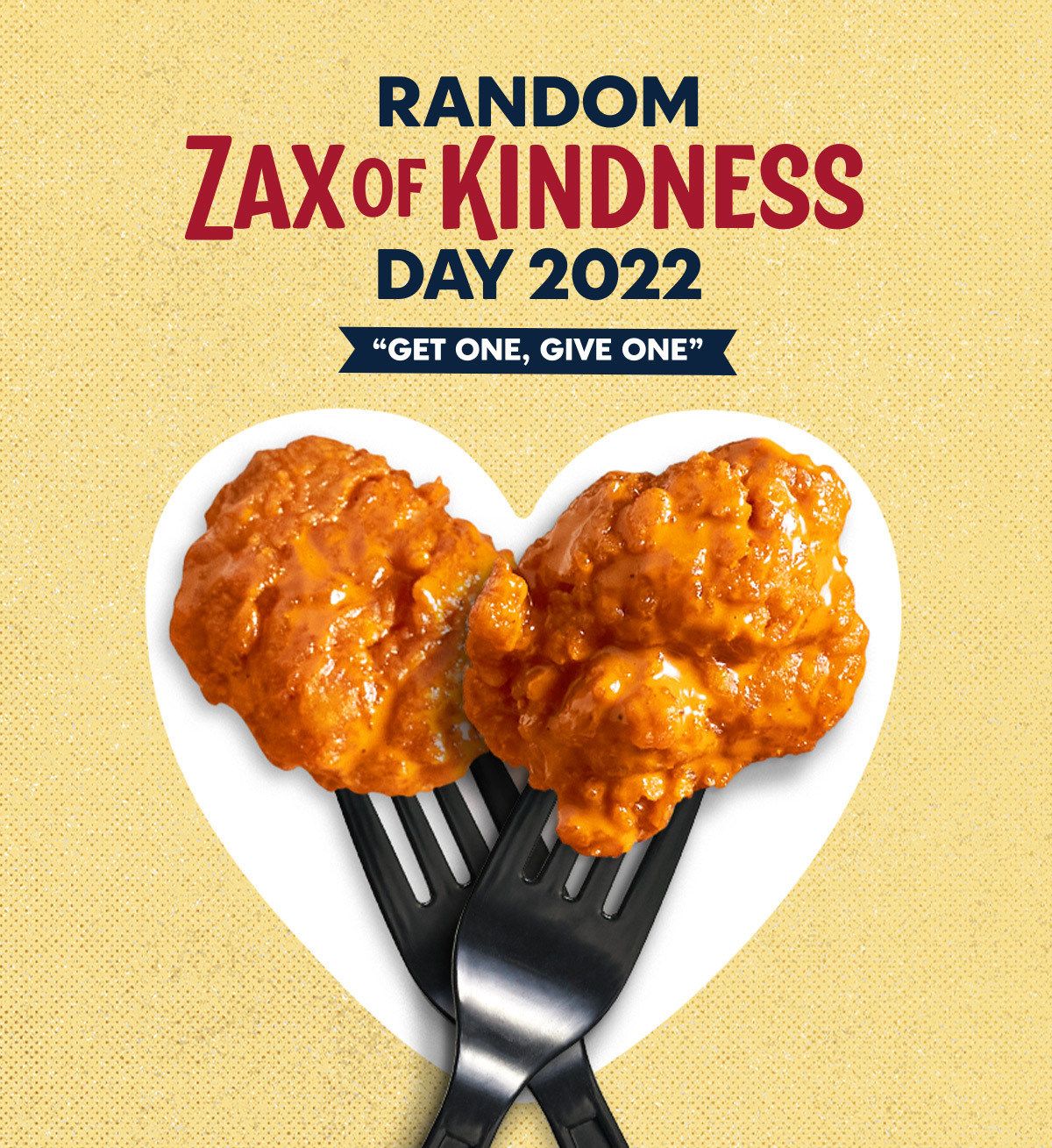 Online-only BOGO is good all day long on Feb. 17

Athens, GA  (-)  Zaxby’s, the premium quick-service restaurant known for its Chicken Fingerz™, wings and signature sauces, is celebrating Random Acts of Kindness Day with a special ‘Get One, Give One’ online-only deal all day long on Feb. 17, while supplies last. Zaxby’s Boneless Wings Meal features five, tender, tasty boneless wings tossed in new Buffalo Garlic Blaze or another one of nine different sauces and is served with Texas Toast, crinkle fries and Ranch sauce.

“We wanted to serve up some kindness for our loyal ‘fanz’ on a day that celebrates being nice to each other. That’s how #ZaxofKindness was born,” said Zaxby’s CMO Joel Bulger. “Whether you give away the extra meal or give it to yourself is entirely up to you.”

Zaxby’s recently introduced its new Buffalo Garlic Blaze signature sauce. The new wing sauce incorporates aspects of spicy garlic and creamy style buffalo sauce, replacing Zaxby’s original buffalo sauce. But the big story is the off-beat ad campaign. The “Guy On A Buffalo Wing” commercial follows the story of a lone cowboy riding a Zaxby’s style buffalo wing discovering a Boneless Wings Meal from Zaxby’s that features the new Buffalo Garlic Blaze sauce. The spot is narrated to a folk song, composed by the band Jomo & The Possum Posse, featuring quirky characters such as The Bobcat, The Squirrel, The Fox and The Hedgehog.

Last year, the brand observed the holiday with an innovative TikTok activation encouraging brand enthusiasts to step up their goodwill game with its #ZaxofKindness challenge. The social stunt kicked off Zaxby’s series of randomly nice brand initiatives on the day set aside to commemorate kindness.

Founded in 1990, Zaxby’s is committed to serving delicious chicken fingers, wings, sandwiches and salads in a fun, offbeat atmosphere where customers are considered friends. Zaxby’s iconic Signature Sandwich won Thrillist’s 2021 Fasties Award for Best Fried Chicken Sandwich. Zaxby’s has grown to more than 900 locations in 17 states and is headquartered in Athens, Georgia. For more information, visit zaxbys.com or zaxbysfranchising.com.