VATICAN CITY (Reuters) -French President Emmanuel Macron and Pope Francis held talks on Monday, with the crisis in Ukraine and prospects for peace there expected to have been their main topic of discussion.

The Vatican said their private talks lasted 55 minutes but, as is customary, did not specify what they discussed.

Prior to Macron’s visit, victims of sexual abuse said the Catholic church was reacting too slowly to a report revealing assaults by French clergy on more than 200,000 children, and urged him to raise the issue directly with the pope.

The Vatican said that Ukraine, particularly the humanitarian situation there, topped the agenda in later talks Macron had with the Vatican’s two top diplomats. They also discussed the Caucasus, the Middle East, and Africa.

Topics in such meetings often mirror what is discussed in leaders’ private papal audiences.

Macron, accompanied by his wife Brigitte and greeted with an honour guard of Swiss Guards, gave the pope a first edition of German philosopher Immanuel Kant’s “Perpetual Peace,” published in French in 1796. The pope gave Macron a medallion depicting an early plan for St. Peter’s Basilica and some of his writings.

From the Vatican, Macron went to an official lunch hosted by Italy’s President Sergio Mattarella, having held talks with new Prime Minister Giorgia Meloni on Sunday.

Macron is in Italy to attend an international conference organised by Italy’s Sant’Egidio Community, a worldwide peace and charity group. He and the pope will jointly close the conference at Rome’s Colosseum on Tuesday.

Opening it on Sunday, Macron said he believed there was a chance for peace in Ukraine. He also said the Russian Orthodox Church was allowing itself to be manipulated by Moscow to justify the war in Ukraine, and urged it to resist such pressure.

(Reporting by Philip PullellaEditing by Bernadette Baum and John Stonestreet) 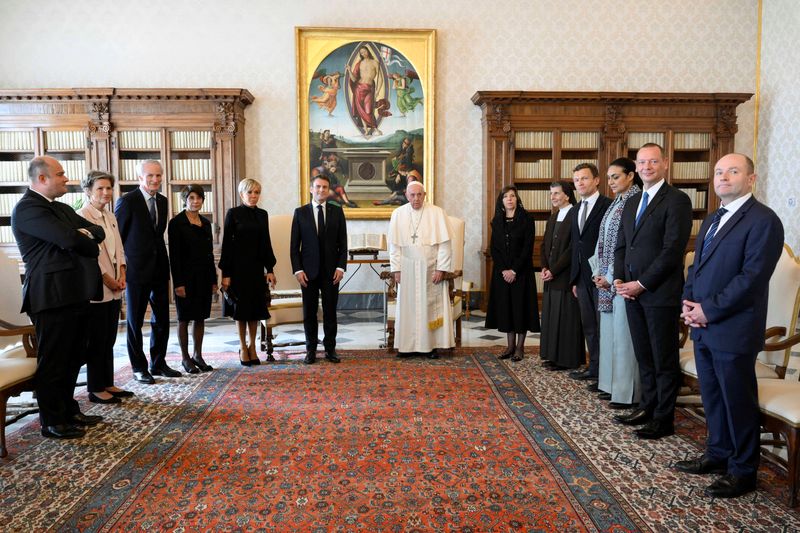