By Byron Kaye and Harshita Swaminathan

The commentary shows one of the country’s biggest companies acknowledging that extreme weather events will likely become more common as the planet warms.

Australia’s east coast, home to four-fifths of the population, has endured floods through 2022 that Treasurer Jim Chalmers said were disrupting livelihoods and pushing up the cost of living when he delivered the federal budget on Tuesday.

Coles said supermarket sales rose 2.3% in the three months to end-September, helped by price inflation of 7.1%, nearly double the previous quarter’s 4.3%, and added that prices would rise further due to flooding.

“We’re very alert to the (fact) that the climate is changing, and we’re doing a lot of work around how do we secure supply better, to manage our way through these various things that will … continue to happen over the next 10 years,” Coles CEO Steven Cain told analysts on a call.

So far, most disruption brought by floods was related to access to farms rather than destroying entire crops, but Cain said it was not clear what the quality of the fruit would be.

Total comparable sales revenue, which include liquor and a chain of service station stores that Coles sold during the quarter, came in at A$10.2 billion ($6.52 billion), up 1.8%.

Coles shares fell 3% by mid-session, against a flat overall market, as analysts weighed the impact of inflation, which economists also blame on soaring energy prices, on profit growth.

The end of pandemic-era stockpiling had likely contributed to declining sales volumes but “trading down is likely contributing to this as well,” Ord Minett analysts wrote in a note, referring to buying cheaper products.

Shares of larger rival Woolworths Group Ltd, which reports September quarter sales on Nov. 3, were also down 3%. At its annual meeting, Woolworths CEO Brad Banducci said inflation remained a concern and the company expected the operating environment to remain challenging.

With Australian inflation at a 32-year high of 7.3% in the September quarter, Coles CEO Cain said cost of living pressures were changing customer behaviour, with lower-income shoppers buying less fresh produce and more canned goods, and “catering in bulk” to reduce food waste.

(Reporting by Byron Kaye in Sydney and Harshita Swaminathan and Upasana Singh in Bengaluru; Editing by Devika Syamnath, Sherry Jacob-Phillips and Jamie Freed) 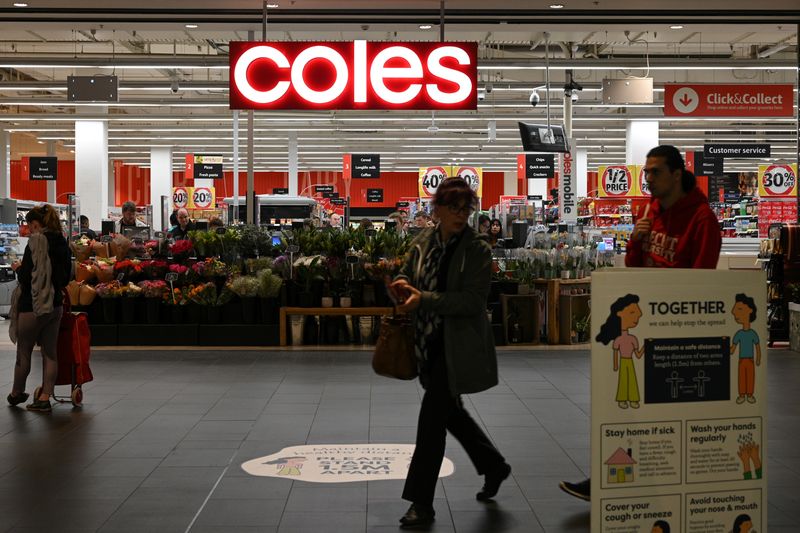