Speaking to reporters as they sat down in the Oval Office, Herzog said he and Biden would attend the COP27 U.N. climate change summit being held in Egypt next month.

“One item that you and I will be participating in, Mr. President, with leaders from all over the world is COP27 in Sharm-el-Sheikh in Egypt a few weeks down the road,” he said.

Biden is expected to attend the G20 summit in Bali, Indonesia, next month. A White House spokesperson declined to comment on the president’s travel plans.

Biden had sought to negotiate the return of Iran to the Iran nuclear deal after then-President Donald Trump pulled out of the agreement in 2018. Last week the White House said it had set aside diplomacy for now and said Tehran had supplied drones to Russia for use in its war against Ukraine.

Herzog noted that Wednesday marked 40 days since the death in custody of Iranian citizen Mahsa Amini. She had been detained by morality police for wearing an “improper” hijab, and her death has set off protests.

“This is an example of Iran crushing their own citizens while moving forward towards nuclear weapons and supplying lethal weapons that are killing innocent citizens in Ukraine. The Iranian challenge will be a major challenge to be discussed,” Herzog said.

Biden noted that Israel and Lebanon on Thursday will sign a maritime accord to establish a permanent boundary. The United States helped negotiate the deal.

“I think it’s a historic breakthrough. It took a lot of courage for you to step up and step into it, and it took some real guts, and I think it took principle and persistent diplomacy to get it done,” Biden said.

A White House statement on the meeting said Biden emphasized the importance of taking steps to de-escalate the security situation in the West Bank and that a negotiate two-state solution between Israel and the Palestinians remains the best way for a lasting peace.

“They discussed the importance of promoting co-existence and weakening extremists who promote hatred and violence,” the statement said. 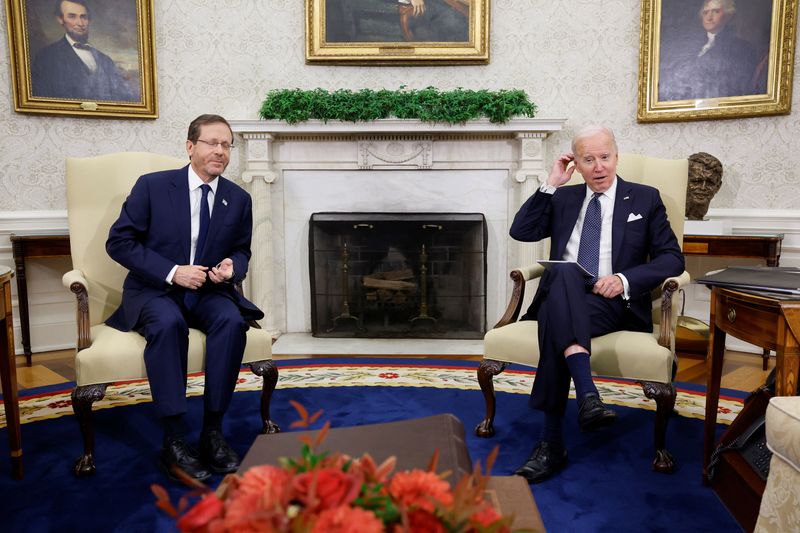