By Sruthi Shankar and Devik Jain

Technology stocks fell 1.8% to lead sectoral losses in Europe after their U.S. peers were dragged down by weak results from Microsoft Corp and Alphabet Inc. [.N]

Italy’s UniCredit was a rare bright spot as its shares rose 3.9% after the bank raised its 2022 profit goal.

“Nonetheless, we are likely to see some hesitation, with the economic implications of rising interest rates yet to be felt. That goldilocks situation of higher margins and economic health could soon come to an end given how the data has been shaping up.”

The pan-European STOXX 600 index slipped 0.3% after hitting more than a one-month high in the previous session on hopes that the U.S. Federal Reserve will slow its pace of interest rate hikes.

A recent survey showed euro zone is likely entering a recession with business activity contracting at the fastest pace in nearly two years this month as the cost-of-living crisis keeps consumers cautious and saps demand.

Focus is on the European Central Bank’s policy meeting on Thursday where policymakers are widely expected to push ahead with another 75 bps rate increase on Thursday in an attempt to tame inflation.

London’s blue-chip FTSE 100 fell 0.6% as the pound rallied on the news, while the domestically exposed FTSE 250 index jumped 0.7%.

Among other single stocks, Heineken NV slumped 6.3% after the world’s second-largest brewery reported a lower-than-expected rise in beer sales in the third quarter and said it has seen signs of slowdown in demand in some European markets.

ASM International tumbled 8.3% after the chip supplier said it expected new U.S. export restrictions to weigh heavily on its sales in China.

(Reporting by Sruthi Shankar in Bengaluru; Editing by Arun Koyyur and Saumyadeb Chakrabarty) 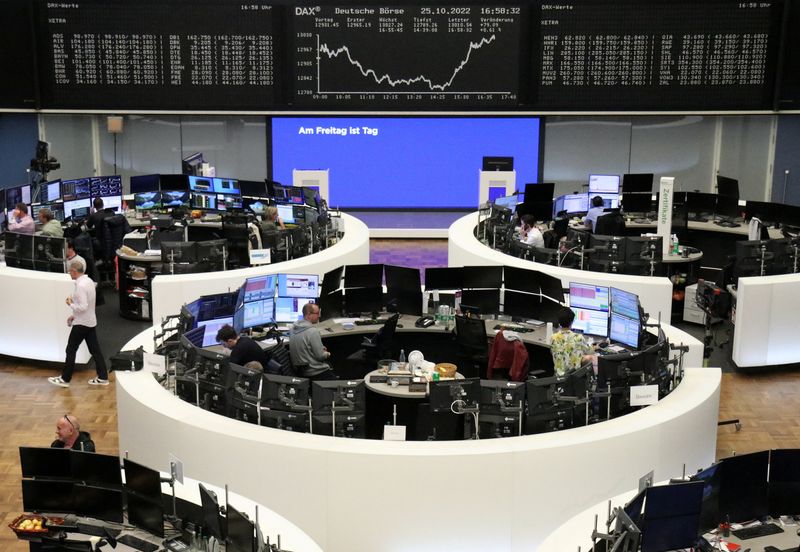