WASHINGTON (Reuters) – U.S. consumer spending rose more than expected in September while underlying inflation pressures continued to bubble, keeping the Federal Reserve on track to hike interest rates by another three-quarters of a percentage point next week.

But there was some encouraging news in the fight against stubbornly high inflation, with other data from the Labor Department on Friday showing private industry wage growth slowed considerably in the third quarter. The moderation occurred in inflation-sensitive industries like retail, construction and finance. Sectors such as healthcare and education, which are still experiencing worker shortages, saw a pick-up.

“Americans may say they are worried about inflation, but they are still out shopping, which keeps the economy growing for another quarter,” said Christopher Rupkey, chief economist at FWDBONDS in New York. “There can be no chance that inflation pressures will subside in the near term from slowing demand.”

Consumer spending, which accounts for more than two-thirds of U.S. economic activity, rose 0.6% last month, the Commerce Department said. Data for August was revised higher to show spending increasing 0.6% instead of 0.4% as previously reported.

Outlays on services also rose, driven by housing and utilities as well as travel and dining at restaurants. Spending on services shot up 0.8%.

The data was included in Thursday’s advance third-quarter gross domestic product report, which showed economic growth rebounding after contracting in the first half.

Last quarter’s 2.6% annualized growth pace was driven by a sharp narrowing in the trade deficit, with a reading of domestic demand being the softest in two years.

Growth in consumer spending slowed to a 1.4% rate from the April-June quarter’s 2.0% pace. September’s data, however, suggested momentum picked up at the end of the quarter, which bodes well for spending in the final three months of 2022.

The Fed has raised its benchmark overnight interest rate from near zero in March to the current range of 3.00% to 3.25%, the swiftest pace of policy tightening in a generation or more. The tightening has included three straight 75-basis-point hikes.

Stalling demand last quarter left some economists anticipating that the U.S. central bank could signal at its Nov. 1-2 policy meeting that it will deliver smaller rate hikes in December and early next year, though much would depend on inflation. A survey from the University of Michigan on Friday showed consumers’ near-term and five-year inflation expectations increased this month from September.

Excluding the volatile food and energy components, the PCE price index climbed 0.5%, matching the increase in August. The so-called core PCE price index advanced 5.1% on a year-on-year basis in September after increasing 4.9% in the 12 months through August.

The Fed tracks the PCE price indexes for its 2% inflation target. Other inflation measures are running much higher. The consumer price index increased 8.2% on a year-on-year basis in September.

But there are some glimmers of hope. In a separate report on Friday, the Labor Department said the Employment Cost Index, the broadest measure of labor costs, rose 1.2% last quarter after increasing 1.3% in the April-June period.

The ECI is widely viewed by policymakers and economists as one of the better measures of labor market slack and a predictor of core inflation because it adjusts for composition and job-quality changes. It is being watched for confirmation that wage growth has peaked.

Labor costs increased 5.0% on a year-on-year basis after advancing 5.1% in the second quarter.

Wages and salaries climbed 1.3% after rising 1.4% in the second quarter. They were up 5.1% on a year-on-year basis after rising 5.3% in the prior quarter.

This fits in with recent data suggesting a moderation in wage gains, including average hourly earnings in the Labor Department’s monthly employment report and the Atlanta Fed’s wage tracker. While the Fed’s “Beige Book” report last week showed “wage growth remained widespread” in early October, it noted that “an easing was reported in several districts.”

“Inflationary pressures stemming from the labor market may be coming off the boil, but it will be some time before they are sufficiently tepid for the Fed,” said Sarah House, a senior economist at Wells Fargo in Charlotte, North Carolina.

State and local government wages, however, jumped 2.1% after rising 0.7% in the second quarter, likely because of salary increases for teachers at the start of the school year.

Spending is being underpinned by the solid wage growth, which is lifting incomes. Households are also tapping their savings to fund purchases. Personal income increased 0.4% last month, matching the gain in August. The saving rate fell to 3.1% from 3.4% in August.

“It looks like consumers have decent spending momentum heading into the fourth quarter, with recent spending gains being supported by the drawdown of ‘excess saving’ that was built up by households earlier in the pandemic,” said Daniel Silver, an economist at JPMorgan in New York. 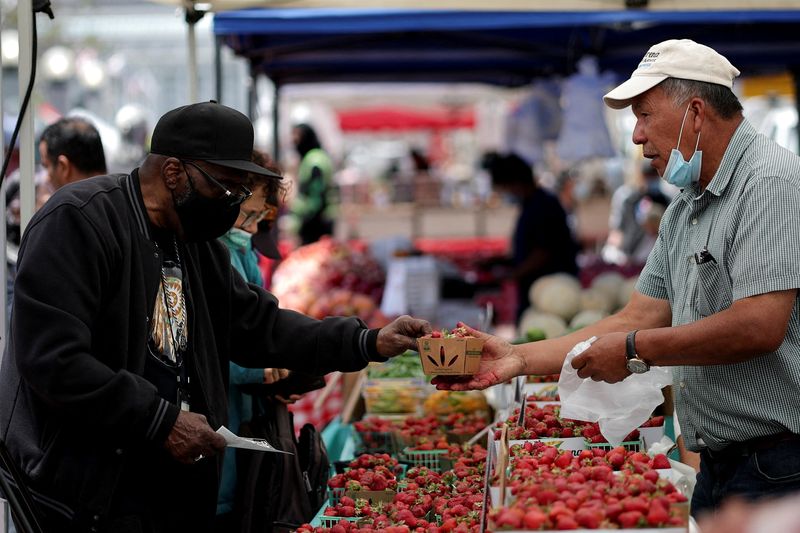