(Reuters) – Elon Musk completed his $44 billion acquisition of Twitter Inc late on Thursday and his first move was to fire the social media company’s top leadership which he accused of misleading him over the number of spam accounts on the platform.

The deal close puts an end to what had turned out to be a protracted legal battle between the two sides.

Below is a snapshot of the Twitter takeover saga.

April 4 Musk discloses over 9% stake in Jumps up to

April 10 Musk says he will not join Twitter Falls 3.3%

protect company from takeover in next

financing for the deal but lags

May 2 Musk seeks to get more external Falls 0.8%

says he will not return as CEO if next

pending review of spam and fake before

committed to the deal losses;

re-electing Elon Musk ally to next

June 6 Musk threatens to walk away from Drops 4%;

provide data on spam and fake below offer

July 8 Musk says he is terminating the Falls 7% in

provisions of the merger agreement trading

as it prepares to sue Musk day; trades

accusing him of “knowingly” the day

breaching an agreement to buy it after;

his $44-billion deal the next

Twitter’s request to speed up a ~6%next

trial over his plan to terminate day; trades

July 19 Twitter will get an October trial Climbs over

in its legal fight to hold Musk to 5%; trades

and weakening digital ad market about 1%

fight against the company over his day; trades

bid to walk away from the deal ~25% below

Delaware court filing that he was the next

saying it was “implausible and ~22% below

August 6 Musk says if Twitter could provide Rises about

method of sampling 100 accounts 1% next

and how it confirmed the accounts session;

are real, his deal should proceed trades ~21%

shares in Tesla saying the funds the next

could be used to finance a day; trades

August 23 A whistleblower complaint by Falls 7.4%;

public. It alleges the company

7 allows Musk to add the the next

whistleblower claims to his day; trade

October 4 Musk proposes to go ahead with his Shares

to two sources before

Management and Sixth Street ~4% the

Partners are no longer in talks next day,

according to sources below offer

October 6 lawsuit vs Musk until Oct. 28 to Shares

Musk is under federal

co-investors he plans to close ~3%; trade

to a source offer price

declares the ‘bird is freed’ trade 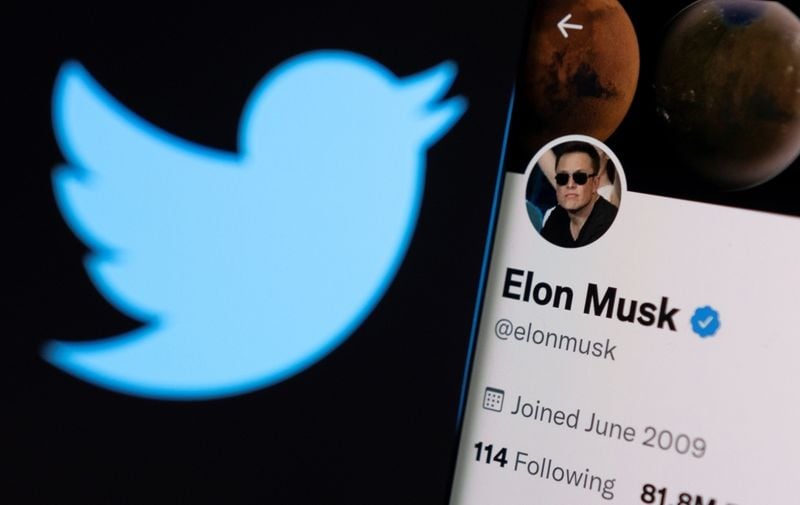