KARACHI, Pakistan (Reuters) – It was the kind of attack Pakistani authorities had dreaded.

A highly educated female suicide bomber killed three Chinese teachers in Karachi in April along with their local driver, targeting nationals from Pakistan’s most important partner and seeking to undermine a relationship on which Islamabad’s financial survival largely depends.

The blow threatened a major segment of Beijing’s Belt and Road infrastructure initiative, a $65 billion network of roads, railways, pipelines and ports in Pakistan that will connect China to the Arabian Sea and help Islamabad expand and modernise its economy.

Separatists from the vast, impoverished Pakistani province of Balochistan claimed responsibility for the attack after a young, educated mother from a well-to-do family blew herself up in an assault captured on CCTV and broadcast on local news channels.

In a video on social media, the separatists warned China to leave Pakistan or face further carnage.

Even though months have passed since the attack, Pakistani authorities remain deeply worried.

“Attacks on the Chinese nationals and projects in Pakistan are of grave concern for the government,” the interior ministry said in a statement to Reuters last week, adding that the government was in active pursuit of such militant outfits.

The Baloch National Army (BLA), the banned group that issued the video, is part of a decades-old insurgency that usually targets Pakistani security forces.

But in recent years the BLA has attacked Chinese nationals, because, it says, Beijing has ignored warnings not to enter deals and agreements regarding Balochistan.

China is involved in major mining and infrastructure projects in the resource-rich province, including the deep-water Gwadar port, all part of the China-Pakistan Economic Corridor (CPEC).

At the start of the video, a masked gunman addresses China. Speaking in English he says: “President of China … you still have time to get out of Balochistan, otherwise you will be taken out of Balochistan in such a way that you will never forget.”

Shortly afterwards, schoolteacher Shari Hayat Baloch, 30, is filmed walking in a park with her young son and daughter and later addressing the camera in combat fatigues.

Smiling and calm, the 30-year-old thanks fellow Baloch separatist fighters for giving her the “opportunity” to become the movement’s first female suicide bomber.

A team of Chinese officials travelled to Pakistan to assist in investigations, the interior ministry said, a sign of the seriousness Beijing attaches to the attack. The visit has not been previously reported.

The Chinese officials supported Pakistan’s counter-terrorism forces in areas such as CCTV footage enhancement and data retrieval from cell phones, the ministry said.

The team left in late August after spending nearly two months trawling through tens of thousands of data files, according to four Pakistani sources directly involved in the probe. The leads they found helped Pakistani authorities zero in on the main suspect in the university attack, who was arrested in July.

China’s foreign ministry did not reply to queries from Reuters. It has previously condemned the April 26 attack and demanded that Pakistan punish the perpetrators, protect Chinese citizens and prevent such incidents from happening again.

Security for Beijing’s interests in Pakistan will be on the agenda during a visit by Pakistan Prime Minister Shehbaz Sharif to China this week, where he will be one of the first leaders to meet President Xi Jinping after he secured a third term in office.

Hayat – a science teacher who had a masters degree in Zoology – was planning to enrol in a second masters degree at the time she detonated explosives in her rucksack as a minivan carrying the three Chinese teachers drove by, police said.

The four officials involved in the probe said interviews with dozens of students, friends and relatives indicated that her path to radicalisation began at the university in the Balochistan capital Quetta through the Baloch Students Organization (BSO).

“It may be difficult to know exactly what provoked her to join the Baloch armed struggle,” said an undated counter-terrorism department report on Hayat seen by Reuters.

“However, she remained a member of the Baloch Students Organization Azad in her student life,” it said.

Unlike the broader BSO, its breakaway faction BSO Azad is banned by authorities who see it as an extreme wing of the Baloch campus movement.

BSO Azad remains underground, and Reuters was unable to contact any of its senior leaders for comment. The BLA, also a banned organisation, did not respond to e-mailed requests for comment.

Two members of staff at Quetta University confirmed to Reuters that Hayat had been active in the BSO Azad when she studied Zoology there from 2011 to 2014. They declined to be named due to the sensitivity of the subject.

One of them recalled that the man Hayat later married, Habitan Baloch, was a leading figure in BSO Azad at the time.

The four officials said another influential figure in Hayat’s life appeared to be Karima Baloch, a leading Baloch activist who featured in the BBC’s list of 100 inspirational and influential women in 2016.

Karima moved to Canada that year after saying she had received threats in Pakistan. Her body was found in the waters off Toronto in late 2020, an event that the officials believe prompted Hayat to join the BLA militants.

Toronto police have said they believed Karima’s death to be a non-criminal matter.

According to two of the Pakistani investigators, as part of brainwashing, the wife of a slain former leader of the BLA spent time with Hayat and introduced her to families of people who had disappeared or whose bodies were found after they had gone missing.

On the day of the Karachi attack, Habitan, a dentist, tweeted that he was “beaming with pride” at what his wife had done.

The post has since been removed and Pakistani authorities say they do not know the whereabouts of Habitan or the couple’s children. Reuters could not reach him via his social media profiles or relatives.

Hayat’s father, Mohammed Hayat, a retired civil servant, told Reuters: “In our families, everyone talks about the resistance, that’s a normal thing. I never knew that she could ever have extremist inclinations.”

Following the bombing, Pakistani law enforcement agencies detained at least seven Baloch students across the country who were suspected of being involved.

All have since been released, a top counter-terrorism official said.

Pakistan has long blamed old enemy India for supporting the Balochistan insurgency. India, which has fought wars with both Pakistan and China, denies the charge.

Dad Bukhsh, a 26-year-old Baloch separatist wanted by authorities for suspected involvement in previous attacks on Chinese targets, travelled from Karachi to the Afghan city of Kandahar in December, 2020, according to the officials.

There he received training in bomb making and armed combat and met several leaders of the Baloch insurgency who were in neighbouring Afghanistan at the time, the officials added.

Afghanistan’s ruling Taliban, who were fighting their own insurgency against Western forces at that time, declined to comment on Bukhsh’s activities. Reuters could not independently verify his alleged role in the April bombing.

According to two of the sources, Bukhsh returned to Karachi in July, 2021, and began to scope out the KANUPP nuclear plant, which is being expanded with Chinese technology and manpower and was considered a potential target for attack.

The interior ministry did not respond to a question on any potential KANUPP attack.

When the facility proved inaccessible, Bukhsh was invited by a BLA operative to meet Habitan, who communicated to him that the new target was to be Chinese teachers at Karachi University, the sources involved in the probe said.

Bukhsh enrolled in an English language course in a campus adjacent to the university in order to trace their daily movements.

In January, Hayat arrived in Karachi from Balochistan, and she and her husband moved from property to property over the following weeks as they prepared for the attack.

On April 24, two days before the bombing, Habitan and Bukhsh left the city and went to Balochistan, according to the officials. Bukhsh returned to Karachi soon after making an alibi that he wasn’t in the city on the day of the attack.

Murtaza Wahab, an adviser to the provincial government in Sindh of which Karachi is the capital, said a joint team of counter-terrorism and intelligence agencies worked on different leads that resulted in Bukhsh’s arrest in the city in July.

Police have filed charges against Bukhsh in an anti-terrorism court, government prosecutor Zulfikar Ali Mahar told Reuters. He is in custody, and does not yet have a lawyer. Reuters was not able to contact him.

Bukhsh will be tried on terrorism charges for killing Chinese nationals and launching an attack against the state’s interests, Mahar said, adding, “We are waiting for the court to give us a date to start his trial.” 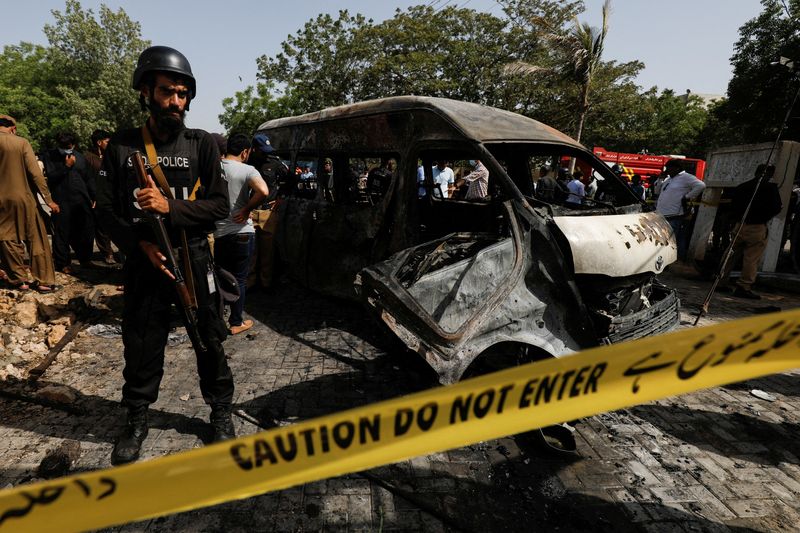 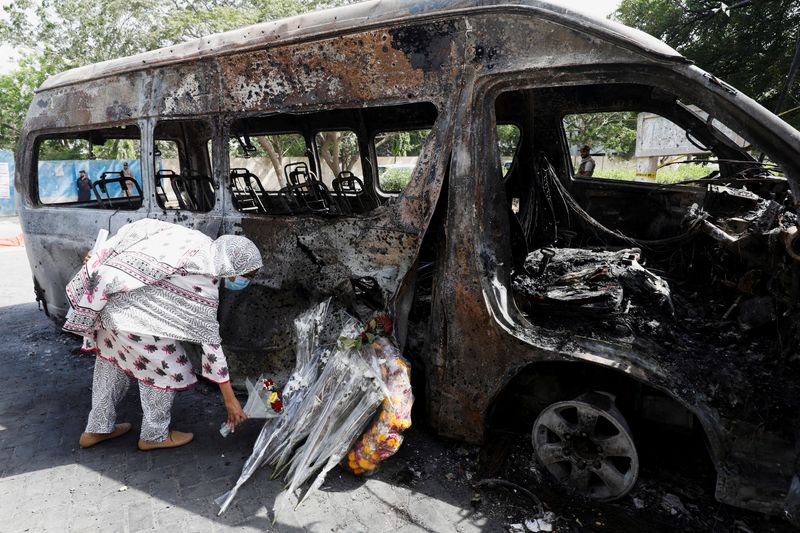 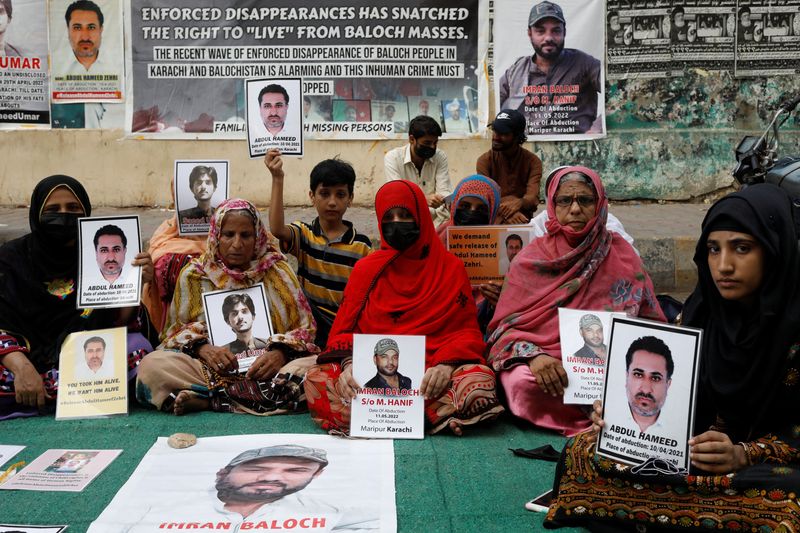 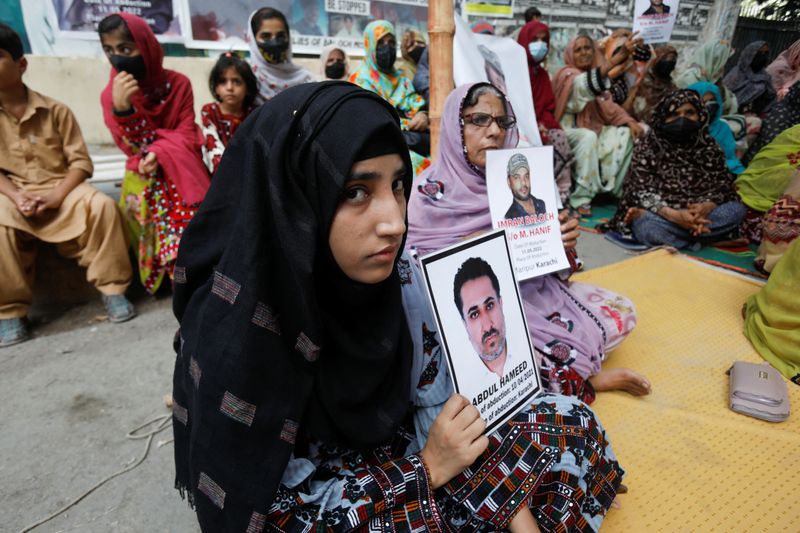 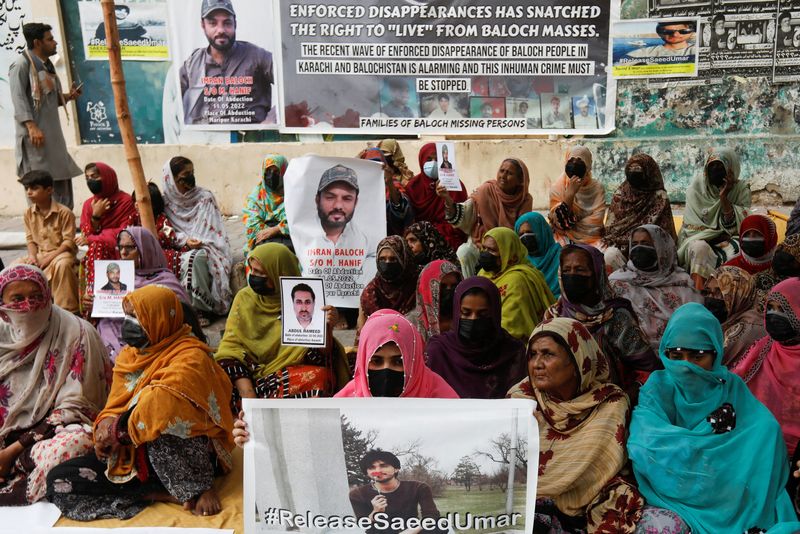