OTTAWA (Reuters) – Canada will introduce tax credits for clean technologies worth up to 30% of investment costs in a bid to close competitive gaps with the United States in scaling up green technologies, the government said on Thursday.

It will also launch a growth fund, first announced in April, by the end of the year with a capitalization of C$15 billion ($10.92 billion) to help mitigate the risks private investors take on when investing in new technologies and infrastructure.

The clean-tech tax credits will be offered for investors in net-zero technologies, battery storage and clean hydrogen, according to the so-called fall economic statement (FES) presented to the House of Commons by Finance Minister Chrystia Freeland.

The new green transition measures are “a step in the right direction helping Canada compete with the U.S. on advanced clean manufacturing,” said Scott MacDougall, a senior advisor at the Pembina Institute, a clean energy think-tank.

However, it “falls short of what’s needed to put Canada on track to achieve its climate goals, missing major increased funding to support net-zero electricity generation and infrastructure,” he added.

Freeland last month promised an initial “response” to the U.S. Inflation Reduction Act (IRA), which was signed into law by U.S. President Joe Biden earlier this year and contains generous incentives for consumers and businesses to make the low-carbon transition.

Canada on Thursday proposed a 2% tax on corporate stock buybacks, similar to a measure in the IRA, that is meant to “encourage corporations to reinvest their profits in their workers and business,” the FES said.

The tax will generate an estimated C$2.1 billion over five years and will come into force on Jan 1, 2024.

The government also promised an investment tax credit for hydrogen in next year’s budget, saying the cleanest producers would qualify to get back at least 40% of their investment, and Freeland promised more action on the green transition.

“These investments represent only a down payment on the work that lies ahead,” Freeland told lawmakers after she presented the document.

One of the investment offerings foreseen by the growth fund are so-called “contracts for difference”, which could help investors in carbon capture and storage mitigate the risk that a future government eliminates Canada’s carbon pricing system. 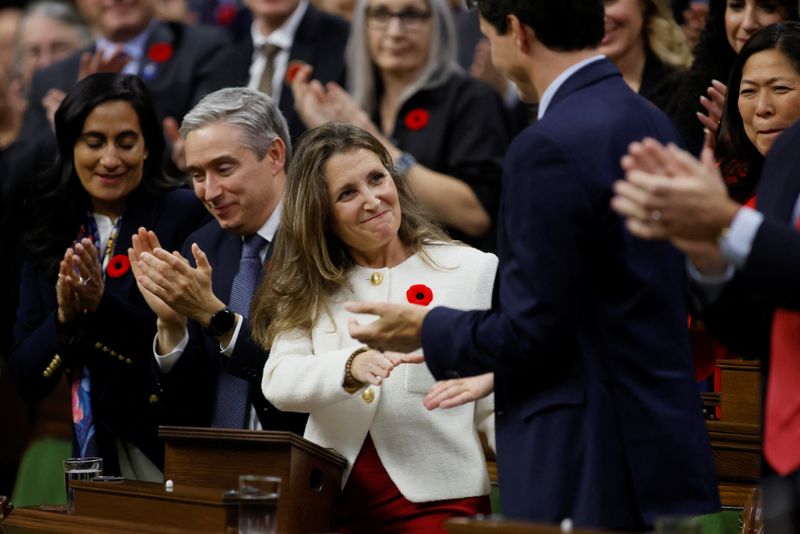