KATHMANDU (Reuters) – Nepal’s main communist opposition party will balance the Himalayan nation’s ties with neighbours China and India for mutual benefit if it is returned to power in a general election this month, its leader said.

Both Asian giants have been locked in a high stakes battle for influence in Nepal — sandwiched between the two countries — longing for a friendly government in Kathmandhu.

India, Nepal’s biggest trade and economic partner, sees it as a natural ally and has invested billions of dollars in its infrastructure. Beijing has also made inroads lately and signed projects under its Belt and Road Initiative.

” They (India and China) are big powers. Our policy of neutrality and non-alignment will be genuinely followed and implemented,” K.P. Sharma Oli, a two-time former prime minister and president of opposition Communist Party of Nepal (Unified Marxist-Leninist), or UML, told Reuters in an interview on Wednesday.

Oli, who is considered by some political watchers to be closer to China, gave New Delhi a rough time in his earlier term as he whipped up nationalist sentiment while altering Nepal’s map over disputed land by including territories controlled by India.

“We will be a reliable friend and neighbour of both. Our foreign policy will be based on mutual benefits and mutual respect,” Oli said as he sat in his office.

The 70-year-old is a favorite for prime minister if his loose alliance with royalists and a group of regional parties dominant in the southern plains wins a majority in the Nov. 20 election for the 275-member national parliament.

He is facing the ruling alliance of Prime Minister Sher Bahadur Deuba with the Maoist Centre party led by Prachanda, who headed a decade long insurgency that ended in 2006. Both Deuba,76, and Prachanda,67, are vying for the top job.

The election is taking place as Nepal faces the highest inflation in six years caused by rising energy prices after Russia’s invasion of Ukraine, and amid growing fears of an economic slowdown following monetary tightening.

Oli said the present government had no vision to tackle inflation, high interest rates and faltering economic growth. Retail inflation is currently hovering over 8% and bank lending rates have gone up to over 18%.

“The high interest rates are not helpful to businesses and industries,” Oli said, vowing to cut rates if returned to power.

In its election manifesto released on Tuesday, Oli’s party promised to create 500,000 jobs every year.

Oli said reconstruction of 750,000 houses, monuments, hospitals and schools destroyed by an earthquake in 2015, along with roads and airports were key achievements of his two previous governments between 2015 and 2021.

“People know that UML is trustworthy, powerful and can lead a strong national government that works for them,” he said. 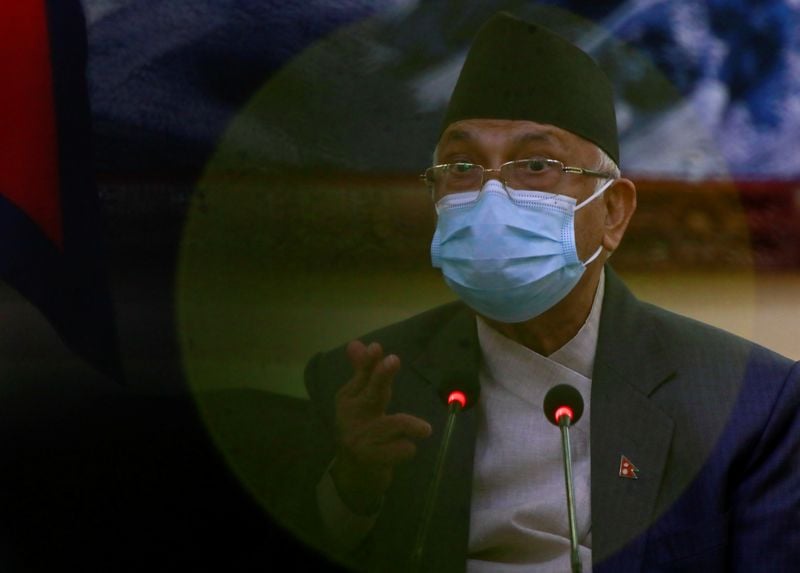