NAIROBI (Reuters) -The Ethiopian government and regional forces from Tigray agreed on Wednesday to cease hostilities, a surprise diplomatic breakthrough after nearly two years of war.

Following are reactions to the agreement.

“For sustainable and inclusive peace to be achieved, the adoption of a transitional justice policy should be preceded and informed by a nation-wide, genuine, consultative, inclusive, and victim-centred conversation.

“The inclusion of a diverse range of national actors including traditional and religious leaders, as well as the meaningful participation of women is necessary.”

“Peace is a prerequisite for health. We welcome the commitment of the Parties to work towards peace in Tigray, Ethiopia.”

“Welcome important agreement between the Ethiopian Government and Tigrayan authorities to end the terrible conflict in northern Ethiopia.

“I applaud their choice of peace, and the mediation efforts of African Union, South Africa and Kenya. UK is ready to support the peace process.”

“We pulled out our teams from Tigray and therefore we are not at the moment represented. We are however, very pleased to note that a peace agreement has just been signed.

“As soon as the situation allows, we will be sending back our teams to the ground because there’s a lot of the public health emergency issues to deal with at the moment.”

“The EU stands by the families of the people who have been killed and those who have been victims of the worst atrocities during those two terrible years. It remains of the utmost importance that the victims see justice being brought upon the perpetrators of those crimes. Accountability is a corner stone for lasting peace and reconciliation.”

“That the Ethiopian government and Tigrayan forces have agreed to cease hostilities is welcome news.

“Yet, we must remain vigilant in the days and weeks to come. All too often, civilians remain vulnerable to mass atrocity crimes as peace agreements are being implemented. Ensuring the agreement’s implementation, including the departure of Eritrean forces, whose government was not part of the negotiations, is critical.”

“The two parties in the Ethiopian conflict have formally agreed to the cessation of hostilities as well as to systematic, orderly, smooth and coordinated disarmament.

“This moment is not the end of the peace process. Implementation of the peace agreement signed today is critical for its success.”

“The agreement signed today in South Africa is monumental in moving Ethiopia forward on the path of the reforms we embarked upon four and a half years ago.

“Making peace has proved more difficult and more intractable and elusive than presiding over the killing of women and children and destruction of property.

“The war over the last two years has claimed the lives of hundreds of thousands and has turned Ethiopia, once on the cusp of great economic progress, into a bad parody of itself and caused tremendous suffering to the people of Tigray.”

“It is very much a welcome first step, which we hope can start to bring some solace to the millions of Ethiopian civilians that have really suffered during this conflict.”

“The United States remains committed to supporting this African Union-led led process as it continues and to partnering to ensure it brings a lasting peace to Ethiopia.”

FORMER KENYAN PRESIDENT UHURU KENYATTA, A FACILITATOR OF THE TALKS

“The level of destruction is immense and the darkness massive.

“We thank our brothers from the other side also for this constructive engagement to allow the country to put this tragic period of conflict behind us. It is now for all of us to honour this agreement. We must be true to the letter and to the spirit of this agreement.” 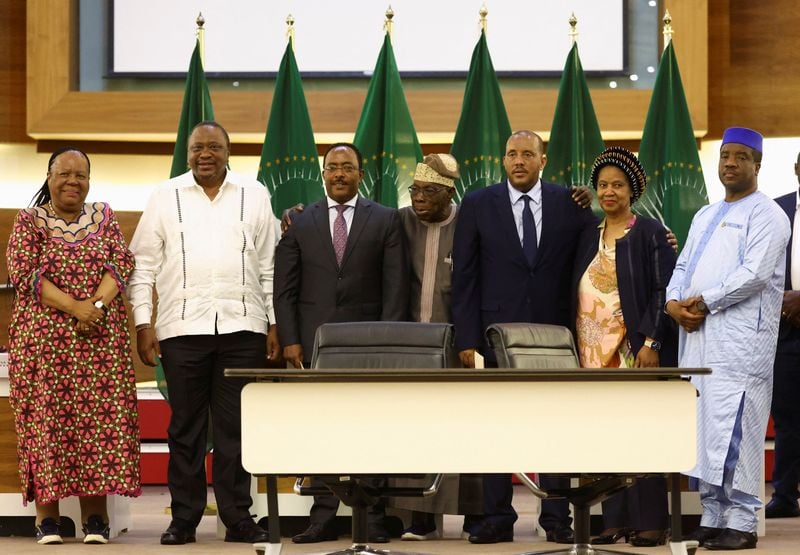