ISTANBUL (Reuters) -Turkish annual inflation climbed to a new 24-year high of 85.51% in October, official data showed on Thursday, slightly below forecast, after the central bank cut its policy rate despite surging prices.

Inflation has surged since last year, when the lira slumped after the central bank began cutting its policy rate in an easing cycle long sought by President Tayyip Erdogan.

In the last three months, the central bank slashed its policy rate by a total of 350 basis points to 10.5%. It promised another cut this month as the final move in the current easing cycle, running counter to the global monetary policy tightening trend.

Month-on-month, consumer prices rose 3.54%, the Turkish Statistical Institute said, below 3.60% forecast in a Reuters poll. Annually, consumer price inflation was forecast to be 85.60%.

The annual inflation in October was the highest since June 1998, when Turkey was working to end a decade of high inflation.

Haluk Burumcekci, founder of Burumcekci Consulting, said the October print could be the peak for headline inflation if the lira does not weaken further.

“We think that the headline inflation may have seen its peak unless there is a depreciation from the lira’s current level,” he said. “A significant decline (in inflation) could only happen towards the 70-75% range due to the base effect in the last month of the year.”

The lira’s 44% decline last year and 29% this year was the main reason behind soaring inflation, in addition to surging energy prices.

Transportation, which includes petrol prices, led the annual rise with 117.15%, followed by food prices at 99.05% and furniture and household equipments at 93.63%.

The median forecast for year-end inflation in the latest Reuters poll was 70.25%, while Turkey’s central bank raised its year-end forecast to 65.20% last week, its fourth upward revision this year.

The government’s economic programme prioritises low rates to boost production and exports with the aim of achieving a current account surplus. 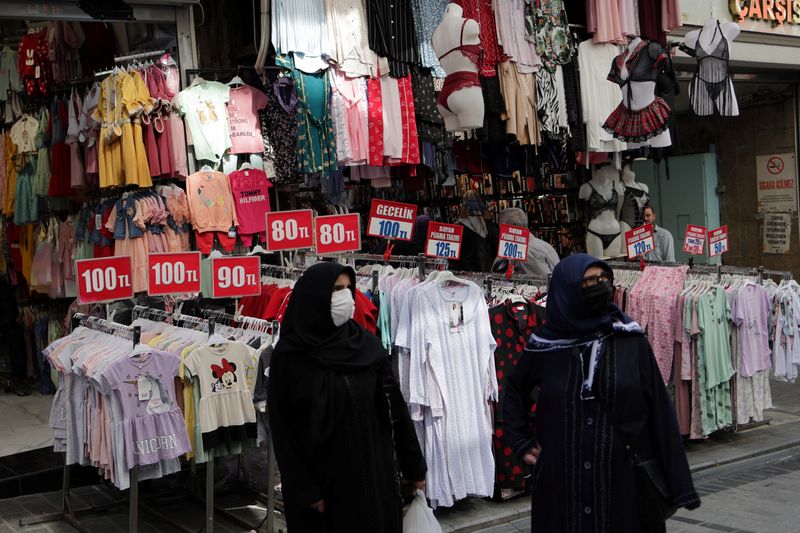