DUBAI (Reuters) -Iran held state-sponsored annual rallies on Friday marking the 1979 seizure of the U.S. embassy in Tehran, as the clerical establishment that has ruled the Islamic Republic since then battles nationwide protests calling for its downfall.

Radical students stormed the embassy soon after the fall of the U.S.-backed Shah, and 52 Americans were held hostage there for 444 days. The two countries have been enemies ever since.

Images broadcast on state television showed anti-American demonstrations attended by tens of thousands of people across the country on the “National Day of Fighting Global Arrogance”. Songs called for “Death to America” and described Iran’s arch-foe as a manifestation of Satan.

Schoolchildren carried banners in support of the storming of the embassy and waved Iranian flags.

Friday’s pro-establishment demonstrations offered a stark contrast to the wave of protests that has swept the country since a 22-year-old Kurdish woman, Mahsa Amini, died in morality police custody on Sept. 16 after being arrested for being inappropriately dressed.

The protests present one the biggest challenges to the authority of the leadership enshrined by the 1979 Islamic Revolution, with many young Iranians overcoming the fear that has stifled dissent ever since.

Women, who have been burning their veils, and university students are playing a prominent role in the demonstrations, which call for the death of Supreme Leader Ayatollah Ali Khamenei, but all layers of society are taking part.

The activist HRANA news agency said on Friday that 300 protesters had been killed in the unrest as of Thursday including 47 minors, as well as 37 members of the security forces.

Iran has blamed the United States and other foreign enemies for the unrest, saying they want to destabilise the country.

U.S. President Joe Biden on Thursday vowed to “free” Iran, and said that demonstrators working against the country’s government would soon succeed in freeing themselves.

Biden did not expand on his remarks.

In response, hardline President Ebrahim Raisi said in a speech televised live on Friday: “I am telling Biden that Iran was freed 43 years ago.” 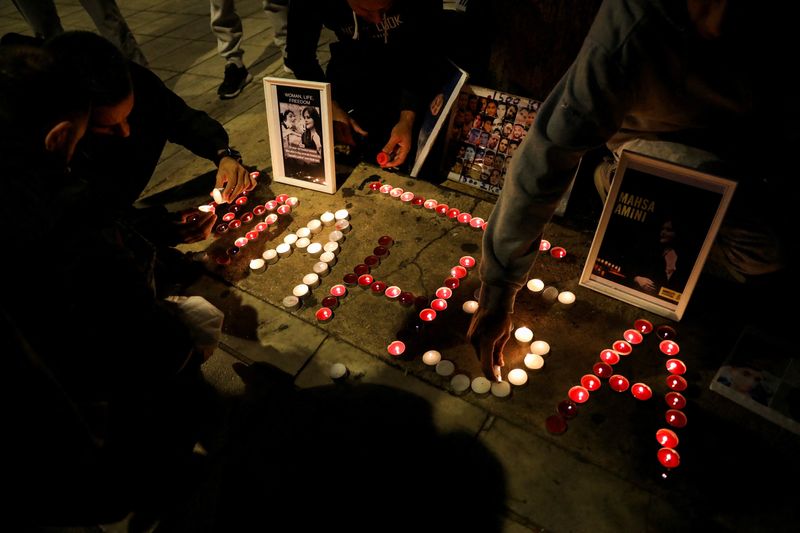