TOKYO (Reuters) -Japan’s SoftBank Group Corp reported its first quarterly profit in three quarters, buoyed by paring some of its stake in China’s Alibaba even as its massive Vision Fund unit posted another heavy quarterly loss.

The sprawling Vision Fund, which upended the world of technology with its big bets on startups, will also write down its investments in troubled crypto exchange FTX to zero, a source close to SoftBank said. The source said those investments amounted to less than $100 million.

The complications at FTX mark the latest difficulty for Vision Fund, which has been hammered in recent quarters by a global tech rout, prompting SoftBank Chief Executive Masayoshi Son to sharply scale back fresh investments.

The source said bailing out FTX, which was valued at $32 billion in January but is now scrambling to raise about $9.4 billion, would be a question for larger investors, as the tech conglomerate retrenches to cut costs and refocuses on managing its existing portfolio.

Vision Fund’s investment losses were 1.38 trillion yen ($9.75 billion) in the three months to September 30 as the value of its portfolio continued to slide.

Son told a briefing that this would be the last time he would speak at a post-earnings briefing for the “foreseeable future”, adding he had no health issues and would focus his additional time and energy on business opportunities related to British chip designer Arm.

“For at least the next few years, I plan to focus solely on Arm’s forthcoming explosive growth, while other (SoftBank) businesses will remain defensive,” Son said. “I’m good at offense by nature. I would like to focus on offense for Arm.”

Son has outlined plans to list Arm in the United States after the sale to Nvidia collapsed, and the source close to the company said on Friday that the listing was unlikely to take place before the fiscal year ends in March 2023.

“The biggest topic of the day is that Mr. Son won’t appear at post-earnings investor relations events any more,” Tokai Tokyo Research Institute analyst Masahiko Ishino said.”As entrepreneur, he is the one who makes final investment decisions. It needs to be carefully watched how investors will react to the concern that they might be given only diluted explanation on why each investment has been made from now on.”

SoftBank itself is synonymous with Son, who with his audacious bets on companies from Chinese tech to startups like WeWork has charted a very different course from any other Japanese company.

At SoftBank itself, net profit came to 3.03 trillion yen in the July-September second quarter. In the first quarter, the group had posted a 3.16 trillion yen loss.

Days after unveiling the massive first-quarter loss, SoftBank said it would reduce its Alibaba Group Holdings stake to around 15% from around 24% by settling prepaid forward contracts and book an estimated gain of 4.6 trillion yen in the second quarter.

In the latest quarter the value of some of SoftBank’s listed investments fell, including its stakes in U.S. real estate broker Compass and Indonesia’s biggest tech firm, GoTo, while South Korean e-commerce firm Coupang was among the gainers.

Shares in SoftBank closed up 1.8% prior to the earnings announcement, lagging a 3% rise in the broader market. 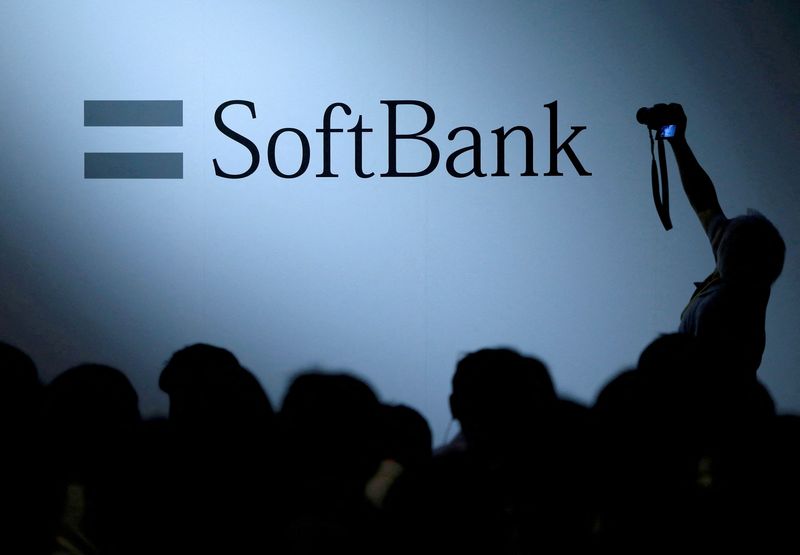