By Shreyashi Sanyal and Devik Jain

(Reuters) -European shares closed higher on Monday driven by positive updates from companies including Germany’s Infineon and Britain’s Informa, while investors positioned themselves for a slew of data including inflation and flash GDP due this week.

Germany’s DAX gained 0.6%. Shares of Infineon climbed 7.8% to top the index after the chipmaker raised its long-term financial targets and said it is planning a new 5 billion-euro ($5.16 billion) factory in Dresden to expand its 300-millimetre production capacities.

The broader technology sector rose 1.2%, the most among the STOXX 600 sectors.

Although caution prevailed in markets after Federal Reserve policymaker Christopher Waller warned that the U.S. central bank would not “soften” its fight against inflation.

“The Fed is trying to communicate to markets that it isn’t going to pivot and is going to continue with this two-way sort of communication of slowing the pace of rate hikes but that doesn’t necessarily mean it will get to a lower endpoint,” said Giles Coghlan, chief market analyst at HYCM in London.

European shares recorded their biggest weekly gain in nearly eight months on Friday largely driven by bets of smaller rate hikes by the Fed and easing COVID-19 curbs in China.

Still, the STOXX 600 is down 11.3% so far this year amid worries about a gloomy economic picture.

UK employment, inflation and retail sales data are on tap later this week, while the Eurozone flash third-quarter GDP estimate and October HICP inflation data among others are also scheduled.

Among other stocks, Roche Holding AG slid 4% to weigh the most on the STOXX 600 after its Alzheimer’s drug candidate could not be shown to markedly slow dementia progression in two drug trials.

Teleperformance added 6.7% after the French office support technology company said it would meet with the Colombian government after Colombia opened a probe into the firm regarding its work practices in the country.

(Reporting by Shreyashi Sanyal and Devik Jain in Bengaluru; Editing by Subhranshu Sahu and Richard Chang) 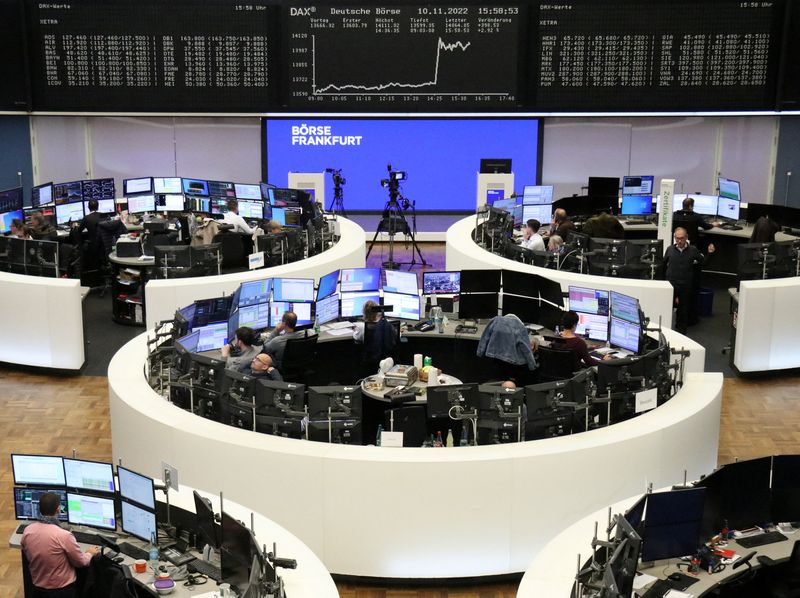