After its best week in months, Wall St now has to assess what’s durable from the euphoria surrounding October’s inflation relief.

Hopes that a surprisingly large inflation retreat last month showed the Federal Reserve can take its foot off the monetary brake next year saw the S&P500 record its best week since June and the tech-heavy Nasdaq its biggest weekly gain since March.

U.S. bond yields and the dollar swooned, while stocks and bonds around the world – battered crypto markets aside – rallied sharply.

But as Treasury markets resume trading this week, following the Veterans Day holiday on Friday, the Fed seems in no mood to cheerlead the moves.

Speaking on Sunday, Fed Board Governor Christopher Waller confirmed speculation the Fed would consider reducing the size of its interest rate rises next month but he stressed it needed to see more before “softening” its overall stance.

With Fed futures still pricing at least another full percentage point of rate hikes between now and mid-June, the comments were enough to sober investors up a bit. Wall St stock futures are in the red ahead of Monday’s open and both Treasury yields and the dollar a touch higher.

Still, the big banks do think the worst of the inflation spike is over – even it comes at the cost of a steep economic slowdown next year and another bumpy year on Wall St.

Forecasting the S&P500 would end 2023 roughly where it is now, Morgan Stanley said it expects headline U.S. inflation to fall back below the Fed’s 2% target by the end of next year. Goldman Sachs said it too expects a “significant” decline in inflation and forecast core personal consumption expenditure – the Fed’s preferred inflation gauge – would fall to 2.9% by December 2023 from 5.1% currently.

Optimism on inflation, if not economic growth, was mirrored by more positive developments around the world on Monday.

That added to hopes for a gradual rollback of COVID curbs after some easing of Covid restrictions on Friday and came as Chinese leader Xi Jinping and U.S. President Joe Biden met at the G20 Summit in Indonesia on Monday for long-awaited talks that markets hoped may ease tensions between the two powers.

Biden’s Democrats, meantime, confirmed their better-than-expected showing in last week’s midterm elections by retaining contriol of the U.S. Senate at the weekend, while control of the U.S. House of Representatives hinged on Monday on several tight races that could secure a majority for Republicans.

The fallout from the collapse of crypto exchange FTX kept bitcoin and other cryptocurrencies under pressure on Monday, with market participants worrying about heavy withdrawals at Singapore-based exchange Crypto.com.

Breaking News:  Hungary complains to EU about Ukrainian law's impact on some firms

It’s a big week for U.S. retail, with WalMart and and Home Depot earnings out later this week and October national retail sales data out too.

Sterling was steady to lower ahead of Britain’s revised annual budget plan is revealed on Thursday.

GRAPHIC: Better than nothing – https://graphics.reuters.com/CHINA-PROPERTY/mopaknmoopa/chart_eikon.jpg 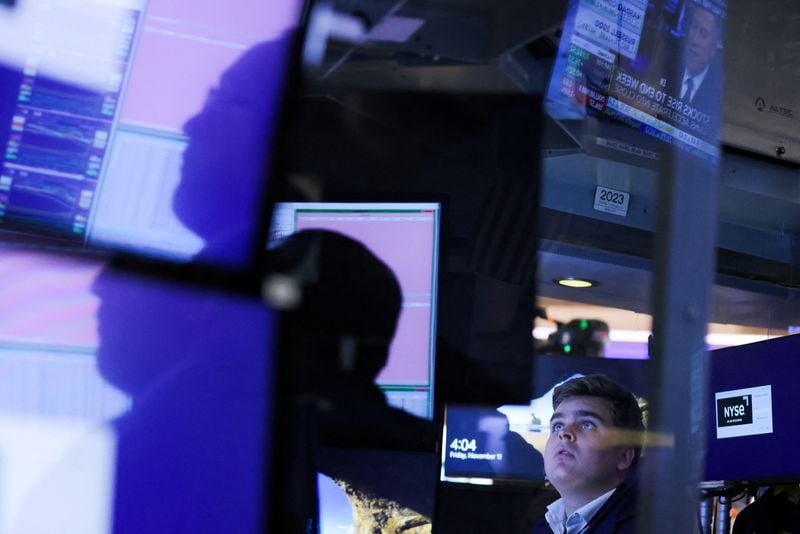