WASHINGTON (Reuters) – As he mounts another run for president, Donald Trump by all accounts is still the same Donald Trump – aggrieved, petulant and tunnel-focused on his political standing. It’s the electoral landscape around him that has changed.

And after Republicans’ underwhelming performance in the 2022 midterm elections, people in the party increasingly want to look forward, not back. Trump is no longer the shoo-in for its presidential nomination that he might have been even a year ago.

In an Election Day exit poll published by Edison Research, six out of 10 respondents said they had an unfavorable opinion of the former president.

Trump faces huge challenges on multiple fronts: civil and criminal investigations and a stream of damaging revelations in a congressional inquiry about his efforts to hold onto power despite losing to Joe Biden in the 2020 presidential vote.

In August, he became the subject of a federal criminal probe into a trove of top-secret documents he was keeping at his Florida home. Trump has claimed he was in lawful possession of the papers.

He no longer has access to his main communication platform and weapon – his Twitter account – which he used to mobilize zealous supporters and effectively attack perceived enemies. Twitter’s new owner, Elon Musk, however, has suggested he could restore Trump’s account.

Trump does retain strong advantages going into a 2024 Republican primary: He remains the most dominant force in the party, he has legions of admirers and he has emerged triumphant from previous setbacks. He also was sitting on a stockpile of about $77 million as of last month, although election rules would make it difficult for him to access it.

At 76, he is also a deeply polarizing figure who has tried the patience of much of the American public. Seven years ago, when he launched his successful presidential bid, Trump the showman and Trump the mogul were known quantities to voters, but who he was as a politician was an open question.

Now there is little doubt, and voters have punished his party as a result, suggesting there is a ceiling to Trump’s appeal.

In a series of Republican Party primaries this year, Trump played the role of kingmaker, largely succeeding in his efforts to boost like-minded candidates. But the general election was somewhat of a disaster for him, as Senate candidates he backed in critical states flopped and cost Republicans control of the chamber.

“It’s basically the third election in a row that Donald Trump has cost us the race, and it’s like, three strikes, you’re out,” Governor Larry Hogan of Maryland, a Republican, told CNN on Sunday.

Trump is also inextricably linked to the Jan. 6, 2021, attack by his supporters on the U.S. Capitol to try to stop lawmakers from certifying Biden’s victory. Trump persists in falsely claiming he lost in 2020 because of massive fraud.

Congressional hearings into the attack have reminded voters that he appeared willing to endanger the safety of his loyal vice president, Mike Pence, who was there on the day, and to fire top officials at the Justice Department to further his unconstitutional push to stay in power.

While Trump wants to seek the Republican nomination unopposed, if rivals do step up to challenge him, he would want as many candidates as possible to get into the race. In that fractured field, a strong alternative candidate would have to emerge for him to lose the nomination.

An October opinion poll by Morning Consult/Politico showed Trump capturing more than 50% of the vote among Republicans, with DeSantis at about 21%. A recent poll of Floridians by Victory Insights found Trump and DeSantis knotted at 50% each.

In a sign that Trump views DeSantis as a mounting threat, he has in recent days taken to boasting at rallies that he would crush him in a Republican primary.

There is also the question of whether Trump’s rightwing Make America Great Again movement, which has captured much of the Republican Party, needs him any more, becoming instead a Trumpist movement without Trump.

A new wave of candidates has echoed much of Trump’s rhetoric without being saddled with his personal liabilities. At times, they have taken angrier and more absolutist positions than those of the former president.

As Florida’s governor, DeSantis has fought against abortion rights, social media companies and the teaching of race and gender in the classroom. He has backed new restrictions on voting.

To some Republicans, DeSantis at age 44 looks more like their party’s future than Trump does. Where DeSantis has placed himself on the cutting edge of Republican politics, Trump by contrast may seem to be like a rock band past its prime, content to play its greatest hits again and again.

Trump’s early announcement may be seen as an attempt to keep these potential rivals off the electoral battlefield while he remains in a position of relative strength. He could succeed in getting Republicans behind his third presidential nomination.

It is just as possible, however, that those rivals will see a damaged candidate and smell blood in the water, leaving Trump to decide just how much he wants to do battle for the party he once unquestionably commanded. 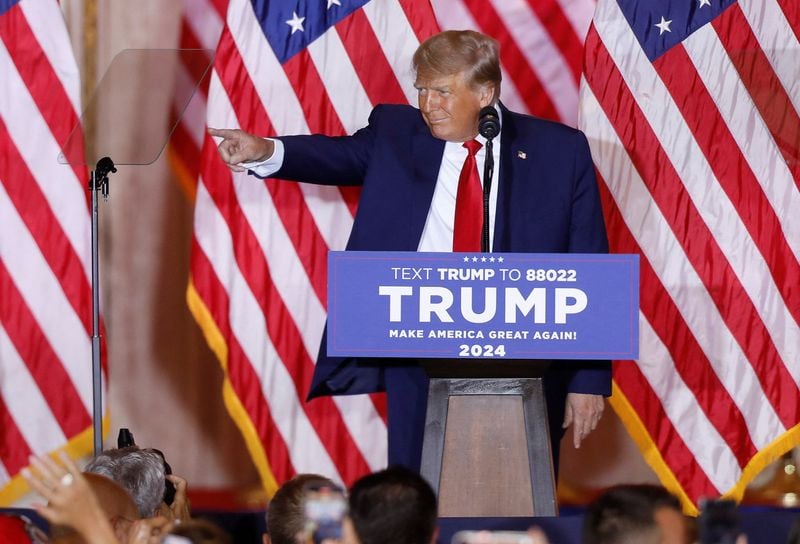