KYIV (Reuters) -Ukraine narrowly escaped disaster during fighting at the weekend that rocked Europe’s largest atomic power plant with a barrage of shells, some falling near reactors and damaging a radioactive waste storage building, the U.N. nuclear watchdog said.

Russia and Ukraine on Monday traded blame for at least a dozen explosions at Ukraine’s Zaporizhzhia nuclear power station, which has been under Russian control since soon after it invaded the country on Feb. 24 but is across the Dnipro river from areas controlled by Kyiv.

Ukraine’s President Volodymyr Zelenskiy urged NATO members to guarantee protection from “Russian sabotage” at nuclear facilities. The head of Russia’s state-run nuclear energy agency, Rosatom, said it had discussed Sunday’s shelling with the IAEA, and said there was a risk of a nuclear accident.

The assault came as battles raged further east following Russian troop movements into the industrial Donbas region from around Ukraine’s recently recaptured Kherson in the south.

Whoever fired on the plant was taking “huge risks and gambling with many people’s lives”, said Rafael Grossi, director general of the International Atomic Energy Agency (IAEA).

IAEA experts toured the site on Monday, and the agency said they found widespread damage but nothing that compromised the plant’s essential systems.

“They were able to confirm that – despite the severity of the shelling – key equipment remained intact and there were no immediate nuclear safety or security concerns,” it said in a statement issued on Monday evening.

Reuters could not immediately verify which side was responsible. The attacks also hit a cooling pond, a cable to one reactor and a bridge to another, according to an IAEA team on the ground citing information provided by plant management.

“We were fortunate a potentially serious nuclear incident did not happen. Next time, we may not be so lucky,” Grossi said in a statement late on Sunday, describing the situation as a “close call”.

“We are talking metres, not kilometres,” he said.

Repeated shelling of the plant during the war has raised concern about a grave disaster in the country that suffered the world’s worst nuclear accident, the 1986 Chornobyl meltdown.

Radiation levels remained normal and there were no reports of casualties, the IAEA said. While there was no direct impact on nuclear safety and security systems, “the shelling came dangerously close”, Grossi said.

Russia’s response to military setbacks in recent weeks has included a barrage of missile strikes, many on power facilities that have left much of the country without electricity as winter sets in and temperatures drop below freezing.

Zelenskiy said that half of the country’s power capacity had been knocked out by Russian rockets.

Grossi spoke to world leaders and reiterated the need for a nuclear safety and security protection zone around Zaporizhzhia, the IAEA said.

CEO Alexei Likhachev said Rosatom been in negotiations with the IAEA “all night”, Interfax reported.

Rosatom has controlled the facility through a subsidiary since President Vladimir Putin in October ordered Russia to formally seize the plant and transfer Ukrainian staff to a Russian entity. Kyiv says the transfer of assets amounts to theft.

Kyiv controls territory across the river from the power station, including the regional capital. The Zaporizhzhia plant itself and territory south of it fell to Russia in March.

The Zaporizhzhia plant provided about a fifth of Ukraine’s electricity before Russia’s invasion, and has been forced to operate on back-up generators a number of times. It has six Soviet-designed VVER-1000 V-320 water-cooled and water-moderated reactors containing Uranium 235.

The reactors are shut down but there is a risk that nuclear fuel could overheat if the power driving the cooling systems is cut. Shelling has repeatedly cut power lines.

Russian forces pulled out of the city of Kherson in southern Ukraine ten days ago in one of the biggest retreats of the war, after being driven out of Kharkiv province in the northeast in September and away from the capital Kyiv in April.

Moscow has been reinforcing the areas it still holds, and pressing an offensive of its own along a stretch of front line west of the city of Donetsk held by its proxies since 2014.

Ukraine’s military said late on Monday Russian forces had tried to make advances around Bakhmut and Avdiivka in Donetsk, and bombarded nearby towns.

Presidential advisor Mykhailo Podolyak said Russia was bombarding Kherson from across the Dnipro river, now that its troops had fled.

“There is no military logic: they just want to take revenge on the locals. This is a huge war crime live,” he tweeted. Moscow denies intentionally targeting civilians in what it calls a “special military operation” to disarm Ukraine.

Ukrainian police and prosecutors have identified four places in Kherson where they suspect Russian forces tortured people before abandoning the city, Ukraine’s prosecutor general’s office said on Monday. Moscow denies its troops have carried out atrocities in areas they occupy. 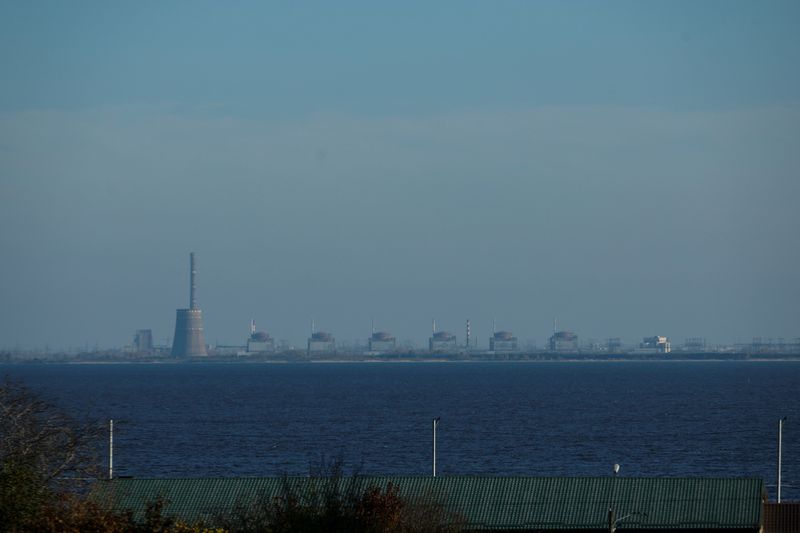