Kyiv was one of the main targets of missile strikes on energy facilities that cut power in many regions and made emergency blackouts necessary in others to conserve energy and enable repairs as winter sets in.

“Our little one was sleeping. Two years old. She was sleeping, she got covered. She is alive, thanks be to God,” said Fyodr, a Kyiv resident walking away from a smouldering apartment building that was hit in Kyiv, dragging a suitcase.

“I’m local. They’re going to find a place for us somewhere… everyone is in the same boat. It’s not just me.”

Kyiv Mayor Vitali Klitschko, speaking late on Wednesday, said 80% of people in the capital were without power and water. Authorities were working as quickly as possible to restore supplies, he said in a statement on his website.

The Kyiv regional administration earlier said the entire Kyiv region – meaning millions of people – was completely without electricity and that the water supply was also disrupted. Much of Ukraine suffered similar problems.

“Repair crews are working – electricity will begin to appear in the coming hours. Don’t panic!” he said in a statement posted on Telegram.

The Ukrainian defence ministry, in a tweet, put the overall death toll at six.

“I was sitting in my flat and I heard an explosion. My windows in my hall, kitchen and bedroom were thrown open by the blast wave,” said Yuriy Akhymenko, 55, who lives in the apartment building across the road from the one that was hit.

Flames still licked the top floor of the five-storey building more than an hour after it was hit. Fire crews worked to haul vast sheets of charred corrugated iron off the roof, and apartments on all five floors appeared damaged.

One woman who declined to give her name said she lived in the damaged building. She said she watched a missile sail overhead two streets away before hearing the explosion as it hit the apartment building.

“I can’t get through to my brother,” she said through tears. “The third entrance to the apartment block is completely gone. The fourth is gone. In the first, everything inside the flats has been strewn all over.”

“We’ll renew everything and get through all of this because we are an unbreakable people,” he said in a brief video address. 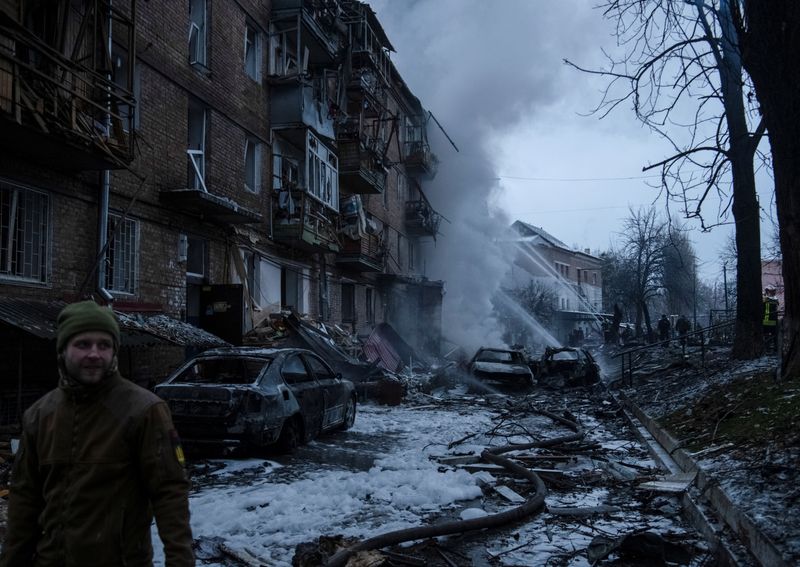 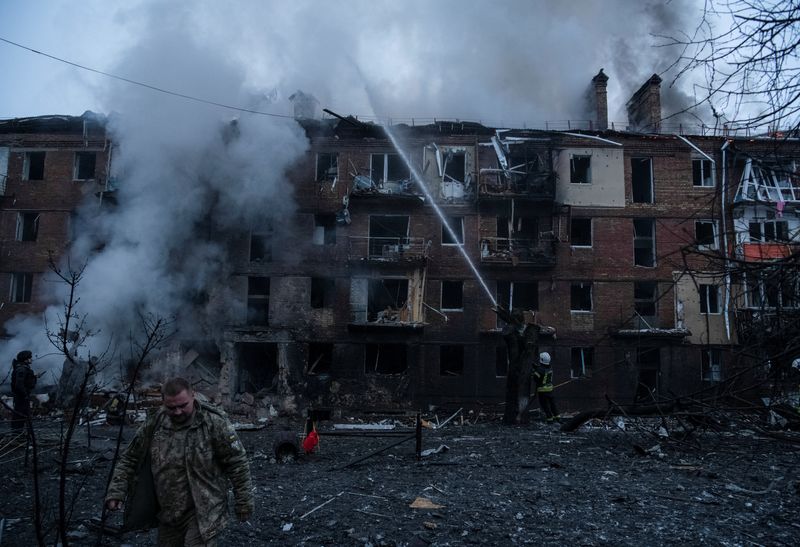