TAIPEI (Reuters) – Taiwan President Tsai Ing-wen on Thursday cast this weekend’s local elections as a referendum on her leadership, saying a vote for her party’s candidates was a vote for her and her commitment to “take good care” of Taiwan and ensure peace with China.

Tsai’s second term in office runs out in 2024 and she cannot stand again as president because of term limits. She was re-elected by a landslide in 2020 on a pledge to stand up to China and protect Taiwan’s freedom and democracy.

Saturday’s elections, for city mayors, county chiefs and local councillors, are ostensibly about domestic issues such as the COVID-19 pandemic and crime, and those elected do not have a direct say on China policy.

But Tsai has reframed the campaign to put relations with China, which views Taiwan as its own territory and has increased military pressure to assert those claims, front and centre.

In a video message, Tsai said voting for the Democratic Progressive Party (DPP) candidates was the same as voting for her.

“If you have not yet decided which city or county chief candidate to vote for, then I ask you to please cast this vote for me, for candidates I am recommending,” she said.

“Thank you for choosing Tsai Ing-wen the last time around, and I believe that I can take good care of Taiwan,” she added. “I am also very conscientious and responsible about Taiwan getting a firm footing internationally, and committed to maintaining peace and stability across the Taiwan Strait.”

The election is happening a month after the end of the 20th congress of China’s Communist Party, where President Xi Jinping secured an unprecedented third term in office – a point Tsai has repeatedly made on the campaign trail.

China carried out war games near Taiwan in August to express its anger at a visit to Taipei by then-U.S. House Speaker Nancy Pelosi.

Taiwan’s main opposition party the Kuomintang (KMT), which traditionally favours close ties with China and crushed the DPP at the last local elections in 2018, says it too is committed to protecting the island’s democracy and freedom.

But the KMT has criticised the DPP for being overly confrontational with China.

Former Taiwan President Ma Ying-jeou, who remains a senior KMT member, wrote on his Facebook page on Thursday that voting for the DPP could bring war and supporting the KMT would ensure peace.

Tsai has repeatedly offered to talk to Beijing on the basis of equality and respect, but has been rebuffed. 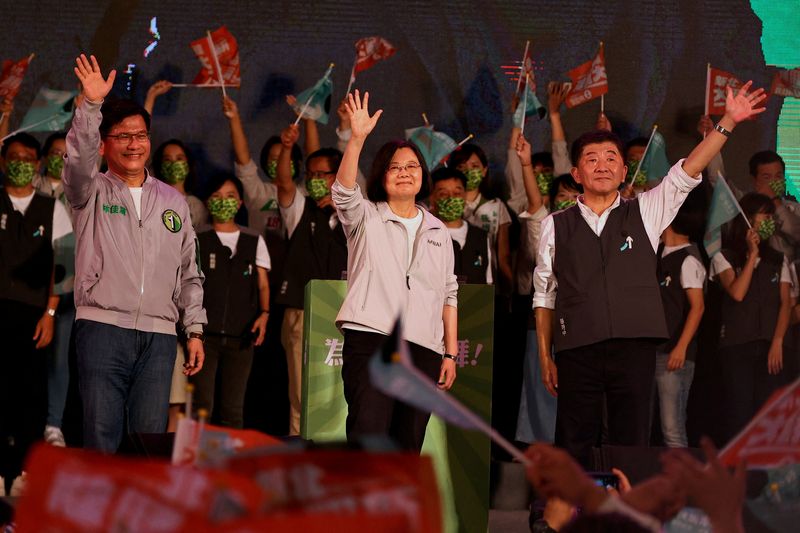