PARIS (Reuters) -French President Emmanuel Macron will be hosted by U.S. President Joe Biden next week in a rare state visit aimed at highlighting Franco-American friendship rather than the bitter economic competition between the two sides of the pond.

More than a year after Washington, London and Canberra torpedoed a big French submarine contract, pushing Franco-US relations to breaking point, the two countries are expected to put on a show of unity on common threats from Russia and China.

But the elephant in the Oval Room will be the U.S. Inflation Reduction Act (IRA). Europeans say the massive subsidy package to U.S. manufacturers could deal a lethal blow to their industries, which are already reeling from high energy prices caused by Russia’s invasion of Ukraine.

Macron will try to convince the United States it is in their interest not to weaken European companies at a time Western allies are facing intense economic competition from China, which they say uses its economic might as diplomatic leverage.

“The pitch will be: there’s obviously a Chinese challenge and we can help get others in the EU out of their naivete on this. But you can’t ask us to help on China and do an IRA on us,” a French diplomat told Reuters on condition of anonymity.

The French leader will try to negotiate exemptions for European companies on the model of those Mexico and Canada has already got, a French presidential adviser said.

German carmakers, for which the U.S. is a big export market, are among the biggest victims of the IRA package which subsides U.S.-made electric cars, the French presidential said. French carmakers do not export to the U.S. but France has major car parts suppliers, which would be affected.

Related News:   SHOSHANA BRYEN: America Needs A Better Ukraine Strategy Than Handing Off Weapons And Hoping For The Best

Energy issues will also feature prominently in the talks at the White House, with France hoping to boost nuclear energy cooperation. Macron wants France to build more nuclear reactors but it is struggling with corrosion issues at its ageing plants.

Macron will also travel to Louisiana, ostensibly to pay tribute to the state’s French heritage, but also to discuss energy issues, the French presidential advisor said.

French oil giant TotalEnergies owns a big liquefied natural gas terminal in the state on the Gulf of Mexico and Macron, who has complained about the high price of U.S. gas exports, said he will bring up the issue with Biden.

“The United States produce cheap gas but sell it to us at high price,” Macron told French executives on November 8. “And on top of that they have massive subsidies in some sectors that make our projects uncompetitive.”

“I think that’s unfriendly and I will go to Washington in a spirit of friendship at the end of the month… to simply plead for a level playing field,” he said. 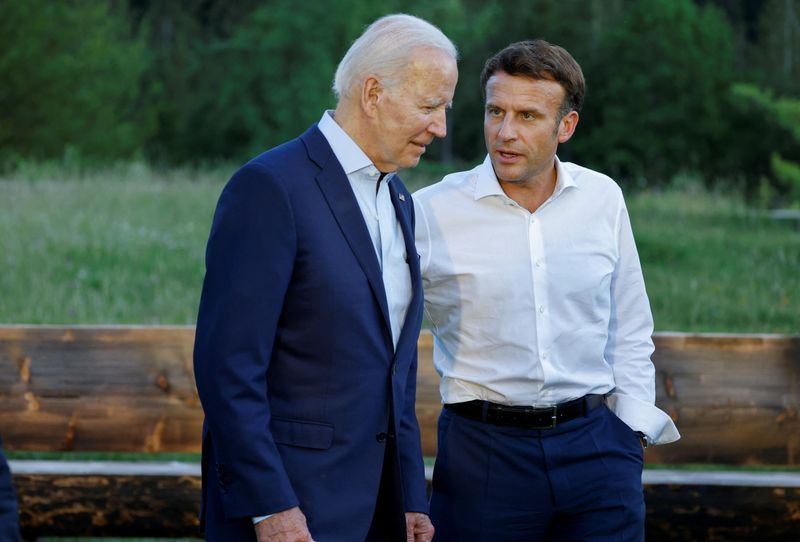