By Karin Strohecker and Dhara Ranasinghe

LONDON (Reuters) -Rare protests rippling across China over Beijing’s zero-COVID-19 policy may have unleashed a fresh wave of political uncertainty but could also hasten the reopening of the world’s number two economy, foreign investors said on Monday.

China’s stocks on Monday suffered their worst day in a month and its currency also took a tumble, while global stocks came under pressure and oil prices slumped more than 3% as protesters made a show of civil disobedience unprecedented since President Xi Jinping assumed power a decade ago.

“While we have been cautious, there is an important shift going on with the COVID reopening.”

China’s markets have had a challenging year, suffering from a mix of political risk aversion in the wake of Russia’s invasion of Ukraine in February as well as worries over its economic growth given stringent COVID curbs and the fallout from its property sector woes.

Chinese bond portfolios have posted outflows every month since Russia invaded Ukraine in February, totalling $105.1 billion over nine months, according to data from the Institute of International Finance (IIF). Chinese stock portfolios lost $7.6 billion in October alone, the most since March.

On Monday, the offshore yuan weakened against the dollar to 7.2468 and the risk sensitive Aussie dollar, which is strongly tied to Chinese growth, was the worst performing major currency, falling 1.61% to $0.6649.

Shares in Apple Inc slid, down 2.7% as worker unrest at the world’s biggest iPhone factory in China stoked fears of a deeper hit to the already constrained production of higher-end phones.

Protests against China’s strict zero-COVID policy and restrictions on freedoms have spread to at least a dozen cities around the world in a show of solidarity with rare displays of defiance in China over the weekend.

“Record cases across multiple cities are putting the (zero-COVID) policy to the test and the unrest highlights the enormity of the challenge facing President Xi Jinping and his commitment to zero-Covid,” said Craig Erlam, senior market analyst at OANDA.

“The combination of these creates huge uncertainty, both in terms of how the protests are handled and what the whole experience means for the future of the policy and the economy.”

Hopes that Beijing could ease some of its harsh COVID restrictions had recently lifted markets off their lows in a year that has seen domestic blue chips and the Hong Kong index tumble more than 20% year-to-date.

The economic pain linked to COVID had started to become a political issue in China, given the impact on youth unemployment in big cities, and adding to pressure on Beijing, which was keen on “avoiding some social unrest”, said Mortier.

Demographics have been a major pressure point for China, which has seen youth unemployment hit a record high of around 20% in July.

If protests were to continue, this would add to the risk premium, said Sean Taylor, chief investment officer for Asia-Pacific at DWS Group.

The 833 billion euro asset manager expects that Chinese stocks could see a 15-20% rally once China exits zero-COVID, though markets could be “quite challenging” until then.

Tang predicted that if there was no major escalation in the situation, investors would soon shift focus back onto the ruling Communist Party’s Central Economic Working Conference in December, which sets the economic agenda for the parliament session, and could confirm a COVID ‘policy pivot’.

“We do not expect economic or market headwinds in China to abate significantly over the coming months,” Haefele said in a note to clients.

“As a result, we remain neutral on Chinese equities. We also view China’s sluggish recovery as a risk for the global economy and markets.” 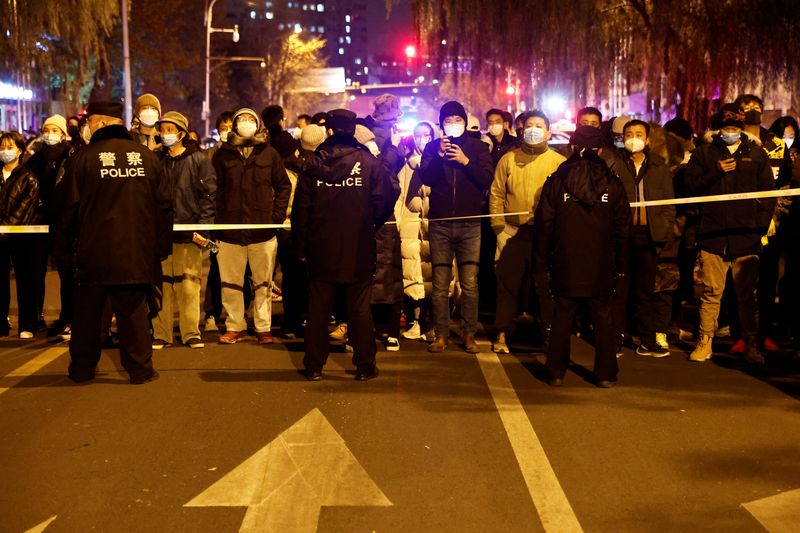