SEOUL (Reuters) – South Korean President Yoon Suk-yeol warned of an unprecedented joint response with allies if North Korea goes ahead with a nuclear test, and urged China to help dissuade the North from pursuing banned development of nuclear weapons and missiles.

In a wide-ranging interview with Reuters on Monday, Yoon called on China, North Korea’s closest ally, to fulfil its responsibilities as a permanent member of the U.N. Security Council. He said not doing so would lead to an influx of military assets to the region.

“What is sure is that China has the capability to influence North Korea, and China has the responsibility to engage in the process,” Yoon said in his office. It was up to Beijing to decide whether it would exert that influence for peace and stability, he added.

North Korea’s actions were leading to increased defence spending in countries around the region, including Japan, and more deployment of U.S. warplanes and ships, Yoon noted.

It is in China’s interest to make its “best efforts” to induce North Korea to denuclearise, he said.

When asked what South Korea and its allies, the United States and Japan, would do if North Korea conducts a new nuclear test, Yoon said the response “will be something that has not been seen before”, but declined to elaborate what that would entail.

“It would be extremely unwise for North Korea to conduct a seventh nuclear test,” he told Reuters.

Amid a record year for missile tests, North Korean leader Kim Jong Un said this week his country intends to have the world’s most powerful nuclear force. South Korean and U.S. officials say Pyongyang may be preparing to resume testing nuclear weapons for the first time since 2017.

North Korea’s tests overshadowed multiple gatherings this month of international leaders, including the Group of 20 conference in Bali, where Yoon pressed Chinese President Xi Jinping to do more to rein in North Korea’s nuclear and missile provocations. Xi urged Seoul to improve relations with Pyongyang.

Ahead of the G20, U.S. President Joe Biden told Xi that Beijing had an obligation to attempt to talk North Korea out of a nuclear test, although he said it was unclear whether China could do so. Biden’s national security adviser, Jake Sullivan, said before the meeting that Biden would warn Xi that North Korea’s continued weapons development would lead to an enhanced U.S. military presence in the region, something Beijing is not eager to see.

South Korea and the United States have agreed to deploy more U.S. “strategic assets” such as aircraft carriers and long-range bombers to the area, but Yoon said he did not expect changes to the 28,500 American ground forces stationed in South Korea.

“We must respond consistently, and in lockstep with each other,” Yoon said, blaming a lack of consistency in the international response for the failure of three decades of North Korea policy.

China fought beside the North in the 1950-53 Korean War and has backed it economically and diplomatically since, but analysts say Beijing may have limited power, and perhaps little desire, to curb Pyongyang. China says it enforces the UNSC sanctions, which it voted for, but has since called for them to be eased and, along with Russia, blocked U.S.-led attempts to impose new sanctions.

Boosting ties and coordination with Washington is the core of Yoon’s foreign policy, a focus highlighted by the main item on his desk: a sign saying “The Buck Stops Here”, a gift from Biden.

Like his predecessor, Moon Jae-in, Yoon has treaded cautiously amid the rising U.S.-China rivalry. China is South Korea’s largest trading partner, as well as a close partner of North Korea.

On rising tensions between China and Taiwan, Yoon said any conflict there should be resolved according to international norms and rules.

Democratic Taiwan, which China claims as its own, has come under increasing military and political pressure from Beijing, which has said it would never renounce the use of force against the island.

“I am firmly opposed to any attempt to change the status quo unilaterally,” Yoon said.

When asked about a role in a Taiwan conflict for South Korea or the U.S. troops stationed there, Yoon said that the country’s forces would “consider the overall security situation” but that their most imminent concern would be North Korean military attempts to take advantage of the situation.

“What is important is responding to the imminent threat surrounding us and controlling the possible threat,” he said.

Yoon has also made increasing cooperation with Japan a core goal, despite lingering legal and political disputes dating to Japan’s 1910-1945 occupation of the Korean peninsula.

As part of its biggest military expansion since World War Two, Japan is expected to procure fresh munitions, including longer-range missiles, spend on cyber defences and create a combined air, sea and land command headquarters that will work more closely with U.S. forces in Japan.

Japan’s military ambitions have long been a sensitive issue in neighbouring countries, many of which were invaded before or during World War II.

Yoon’s predecessor stopped many of the trilateral exercises and nearly left an intelligence sharing deal with Tokyo as relations soured.

“I believe the Japanese government cannot be asleep at the wheel with the North Korean missile flights over their territory,” he said. 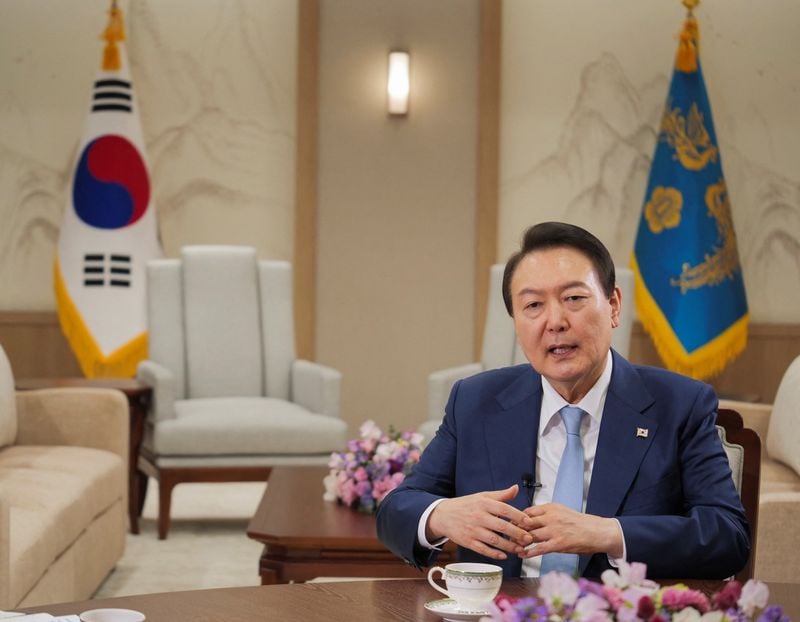 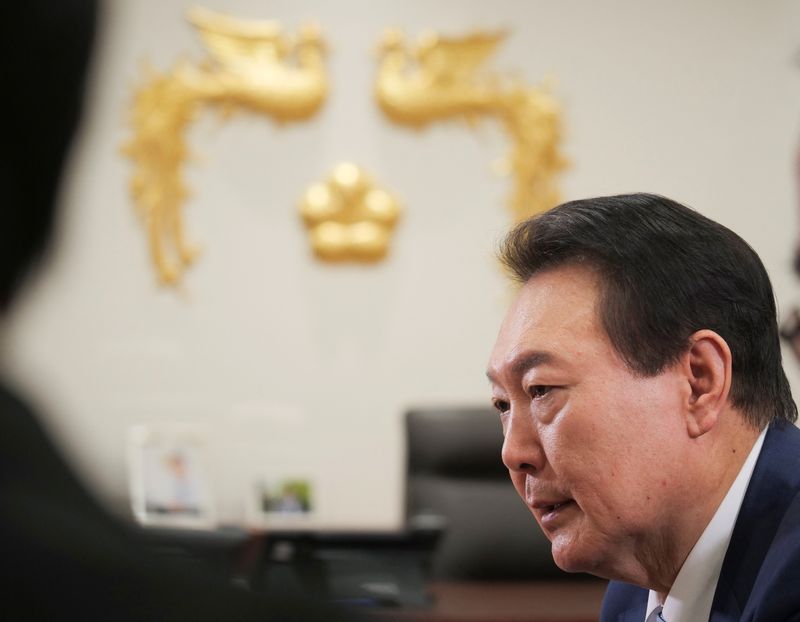 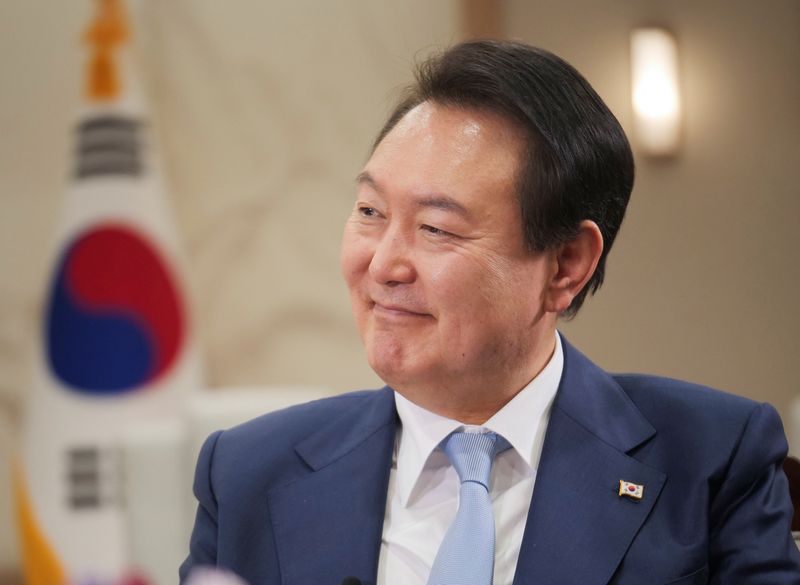 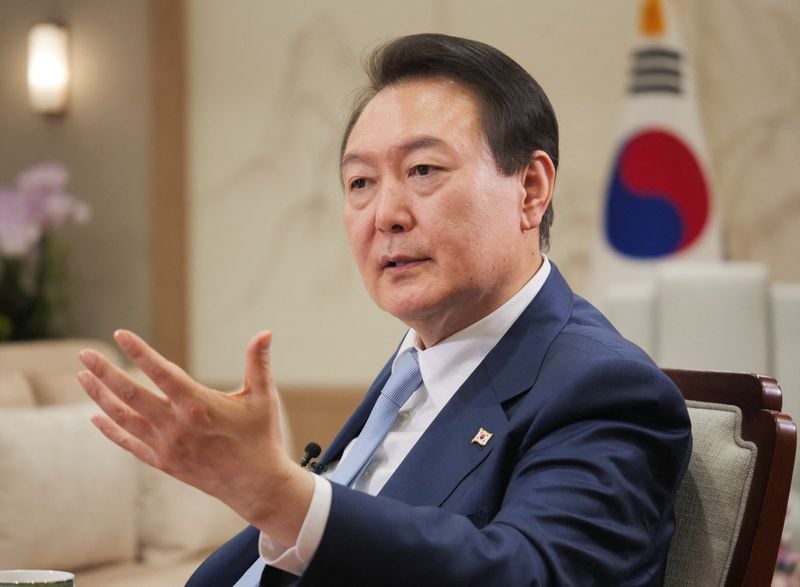 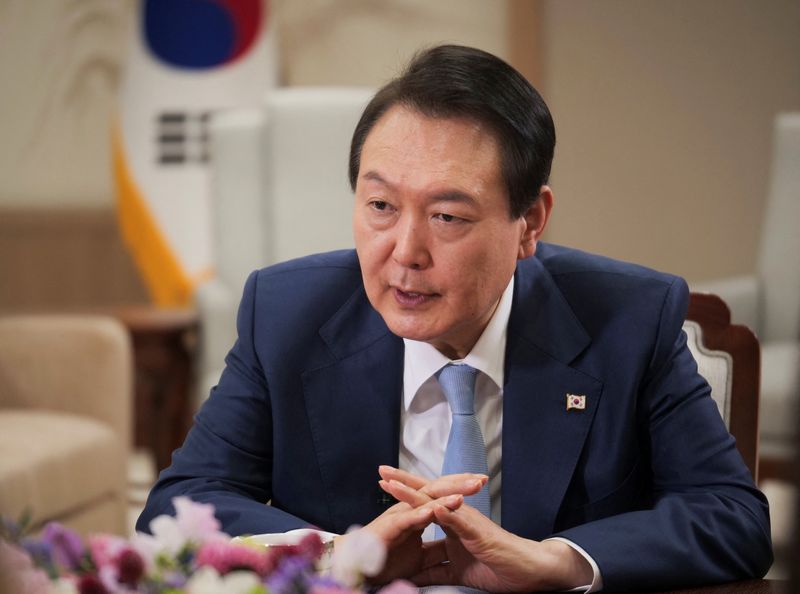