(Reuters) – A mother and child were killed early on Wednesday when a tornado tore through central Alabama, one of numerous twisters that reportedly touched down in the region overnight, leaving behind a path of destruction and power outages.

The 39-year-old mother and her 8-year-old son lost their lives when a massive tree fell on their home in Flatwood, an unincorporated area north of Montgomery, the state capital. The incident, at about 3:30 a.m. local time, followed reports of a tornado touching down in the area, county officials said on Wednesday morning.

The victims “didn’t stand a chance,” he added. “Before they could even get the warning, the tornado was up upon them.”

Rescue workers were able to extract a man from the home and take him to the hospital, officials said without disclosing the extent of his injuries.

The tornado was one of three dozen twisters that weather spotters in Mississippi and Alabama reported to the National Weather Service overnight. In addition to the tornadoes, large hail and strong winds damaged and destroyed homes and buildings, took down trees and downed power lines across the region.

In Montgomery County, one of the hardest-hit areas, crews were clearing debris from roads and assessing the damage on Wednesday morning, Sheriff Derrick Cunningham said.

“We have gone door-to-door and we will continue to do that until we make sure that everybody is accounted for. That is our number one priority,” he said.

Some 20,000 homes and businesses in Mississippi and Alabama remained without power on Wednesday afternoon, according to Poweroutage.us.

(Reporting by Brendan O’Brien in Chicago; Editing by Lisa Shumaker) 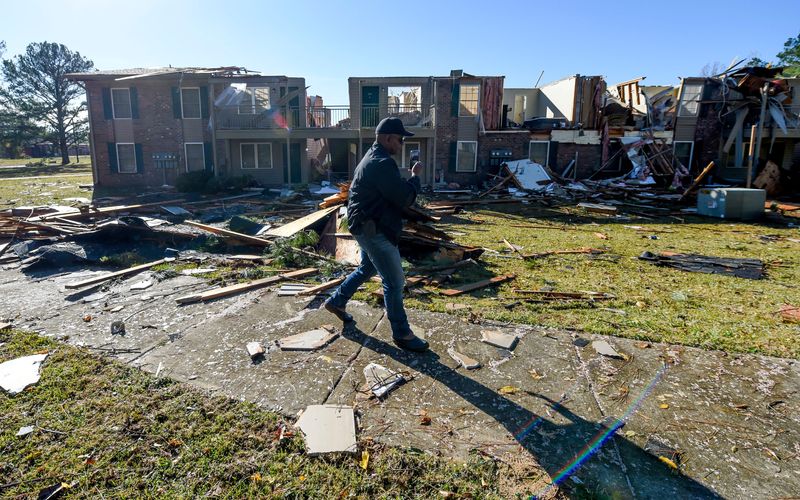