By Kanishka Singh and Sneha Bhowmik

(Reuters) -Defeated Republican gubernatorial candidate Kari Lake sued Arizona elections officials on Friday to challenge the counting and certification of the November electoral contest and ask to be declared the winner despite a lack of evidence of voter fraud.

The suit targets Lake’s Democratic opponent, Governor-elect Katie Hobbs, currently Arizona’s secretary of state, along with top officials in Maricopa County, according to the filing on Friday with the Maricopa County Superior Court.

Lake was one of the most high-profile Republican candidates in the midterm elections to embrace former Republican President Donald Trump’s false claims of voter fraud in 2020.

In a 70-page complaint, Lake called on the state court to declare her the winner of the governor’s race, or alternatively throw out the results and require Maricopa County to conduct a new election. The suit claimed “hundreds of thousands of illegal ballots infected the election” in Maricopa, the state’s most populous county.

Hobbs’ campaign manager Nicole DeMont called the lawsuit a “nuisance” in a statement on Saturday.

“Kari Lake needs attention like a fish needs water,” she said. “Independent experts and local election officials of both parties have made clear that this was a safe, secure, and fair election.”

Maricopa County spokesman Fields Moseley said the court system is the appropriate venue for campaigns to challenge the results. Moseley said the county “looks forward to sharing facts about the administration of the 2022 General Election and our work to ensure every legal voter had an opportunity to cast their ballot.”

In November, Trump-backed Lake lost the governor’s race to Hobbs but refused to concede and continued making unconfirmed claims about election improprieties on her Twitter feed.

Lake, a former television news anchor, was one of a string of Trump-aligned Republican candidates who lost battleground state races in the midterm elections.

During her campaign, Lake vowed to ban the state’s mail-in voting, which conspiracy theorists falsely claimed was vulnerable to fraud, sowing distrust about the safety of a voting method used by hundreds of thousands of Americans. 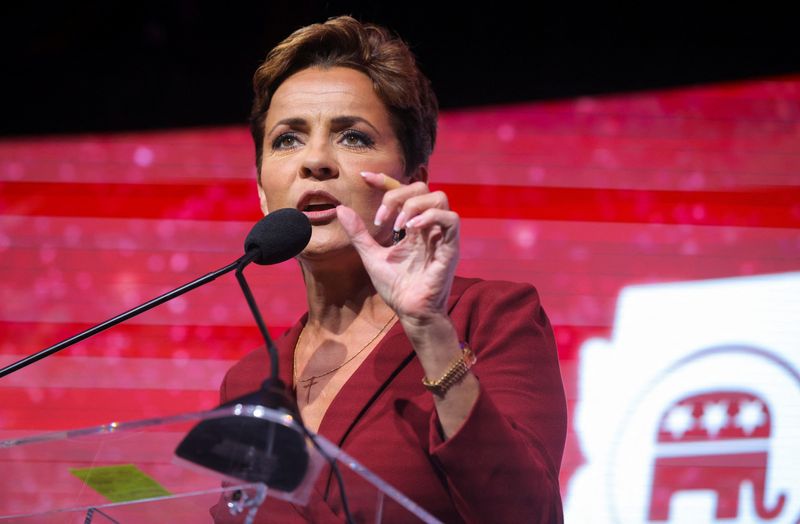