SYDNEY (Reuters) – A look at the day ahead in European and global markets from Wayne Cole.

It’s been a quiet start to the week in Asia with much of the region on holiday. U.S. stocks futures are near flat, but EUROSTOXX futures added 0.5% to extend their recent bullish run.

Presumably much of that is due to the 60% drop in European gas prices since December and relief that the worst fears of an energy crunch have not come about, even if it has turned a bit colder in recent days.

Analysts assume the same sea change will deliver an improvement in the EU flash PMIs for January this week, likely outperforming the U.S. surveys.

This has combined with some hawkish words from ECB Governing Council member Knot to lift the euro to a fresh nine-month high at $1.0903 and challenge the April spike top at $1.0936.

Knot is considered a card-carrying member of the ECB hawk club, which was clearly irked by recent reports that the central bank might step down to quarter-point hikes in March.

The latest Reuters poll of analysts tips hikes of 50 basis points in both February and March and a peak of 3.25%, while the Fed is now thought certain to go by 25 basis points next week.

Minutes on Monday of the Bank of Japan’s December meeting, where they shocked markets by widening the yield curve band, were striking in how dovish board members still were. The move really was aimed at dysfunction in the bond market and was not a flag of future tightening or dropping YCC altogether.

Members were keen that the BOJ explain to markets that the change was not a step toward an exit from policy easing, something it clearly failed at in the official statement.

Indeed, most of the discussion was about the importance of maintaining stimulus, a stance Governor Kuroda repeated more forcibly after last week’s meeting.

Going by all this, if YCC is to change it will likely be under the new governor in April, and it is not clear the whole board would agree with it.

– ECB’s Lagarde and Panetta are appearing

– No major economic data due on Monday. Around a quarter of the S&P 500 report this week starting with Microsoft on Tuesday. 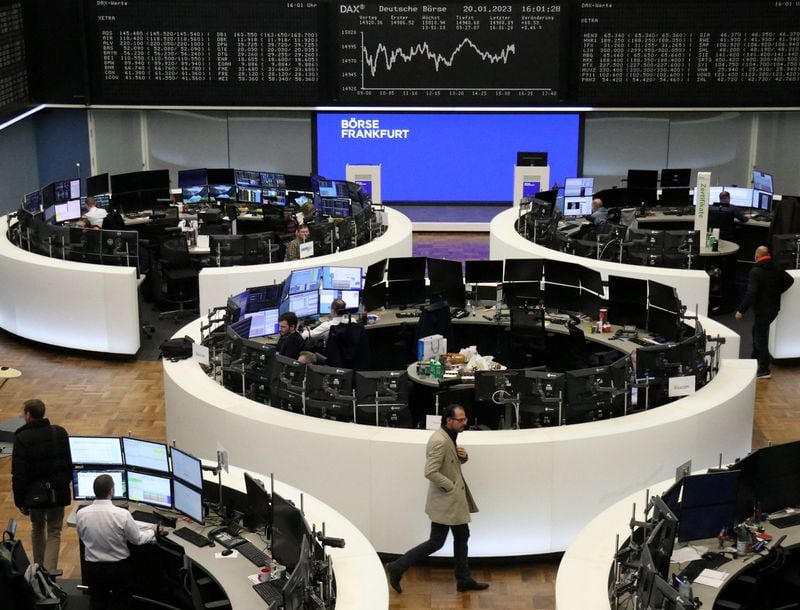