By Alexandra Ulmer and Tim Reid

In apparently unrelated acts of mass murder, 7 people were killed on Monday in an attack on farm workers, many of them immigrants, in the seaside town of Half Moon Bay near San Francisco while 11 people were shot to death on Saturday night at a Los Angeles-area dance hall frequented mostly by older patrons of Asian descent.

The suspects in both attacks were men of retirement age, much older than typical perpetrators of deadly mass shootings that have become all too common in the United States.

Authorities said the two men, Huu Can Tran, 72, and Chunli Zhao, 66, each used a semi-automatic pistol. The victims of both attacks came from immigrant communities. Tran fired on ballroom dancers celebrating the Lunar New Year in Monterey Park near Los Angeles, and Zhao sprayed bullets at farm workers of Hispanic and Asian origin 380 miles (610 km) north in Half Moon Bay.

Tran tried to attack a second dance studio on Saturday night but was disarmed without firing a shot in a struggle with the club’s operator. The next morning, he shot himself to death in the driver’s seat of his getaway vehicle as police closed in.

Zhao was arrested on Monday evening outside a sheriff’s station where authorities said he had driven shortly after the Half Moon Bay shootings, apparently to surrender.

As of Tuesday, authorities said they had yet to determine precisely what sparked either shooting. Circumstances surrounding the Half Moon Bay carnage pointed to some type of work-related disgruntlement, officials said.

“All of the evidence we have points to this being the instance of workplace violence,” San Mateo Sheriff Christina Corpus told reporters on Tuesday. She said Zhao had been employed at Mountain Mushroom Farm, one of two sites he is accused of attacking. The other, Concord Farms, is about a mile (1.6 km) away.

That theory seemed buttressed by court records, obtained by the San Francisco Chronicle, showing that a restaurant co-worker had obtained a restraining order against Zhao after accusing Zhao of assault and death threats, the newspaper reported on Tuesday. The court order is no longer in effect.

San Mateo County jail records showed Zhao was booked on suspicion of premeditated murder, attempted murder and firearms offenses. He was expected to be formally charged on Wednesday, when he was due to make his first court appearance in Redwood City.

The latest spate of lethal gun violence in California was the worst in decades in a state known for relatively strict firearms regulations. U.S. President Joe Biden on Tuesday renewed his call for Congress to pass a national ban on assault weapons.

“Even as we await further details on these shootings, we know the scourge of gun violence across America requires stronger action,” he said.

California Governor Gavin Newsom, addressing reporters in Half Moon Bay, said he was disgusted with politicians, and even judges, at all levels who have blocked tougher gun regulation, despite an unrelenting tide of firearms violence in America.

“Thirty-nine, now, of these mass shootings, and we’re only on day 24 of the new year,” Newsom said, citing figures from the national database kept by the nonprofit Gun Violence Archive. “Only in America. No. 1 in gun ownership. No. 1 in gun deaths. It’s not even complicated.”

The governor, a second-term Democrat, singled out U.S. House Speaker Kevin McCarthy, a California Republican, as among those leading the Republican opposition to gun control.

At news conference on Capitol Hill, McCarthy expressed condolences to families who lost loved ones in the recent bloodshed.

Asked if Congress would take up legislation to combat mass shootings and gun violence generally, McCarthy said he wanted more information about the latest massacres, adding that California has some of the nation’s strictest gun laws and “apparently that did not work in this situation.”

Countering such arguments, Newsom said a series of reforms enacted by legislators in Sacramento from 1993 and 2017 had lowered California’s firearm deaths by 55%, while the state ranks 37% below the national average in the rate of gun deaths.

News of the Half Moon Bay shooting broke as detectives were still investigating the Saturday night shooting at Star Ballroom Dance Studio in Monterey Park, where Tran had been a longtime patron.

On Monday, Los Angeles County Sheriff Robert Luna said investigators had collected 42 bullet casings and a large-capacity ammunition magazine from the Star Ballroom, attesting to the firepower unleashed at the dance studio.

A 57-year-old patron who was there and identified herself only as Shally recounted momentarily mistaking the first gunshots for firecrackers, then huddling beneath a table with her dance partner when they realised what was happening.

“We were dancing, so happy, you know, then suddenly the gun sound,” she recalled in a Reuters interview on Tuesday. “I told my partner, ‘Don’t say anything, just lie down, please don’t say anything.'”

When the gunfire ended, and the suspect had fled, Shally said, she told her partner to “wake up now,” but “he didn’t respond.” At that point she panicked as she found her hand covered in blood, then realized her partner had been shot.

He did not survive. Asked if she would attend another dance class, Shally shook her head. “I think it will take a while to heal.” 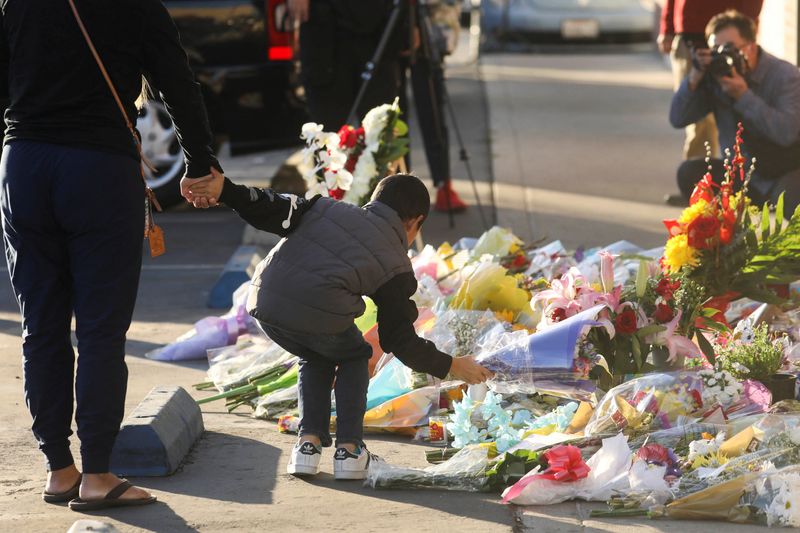 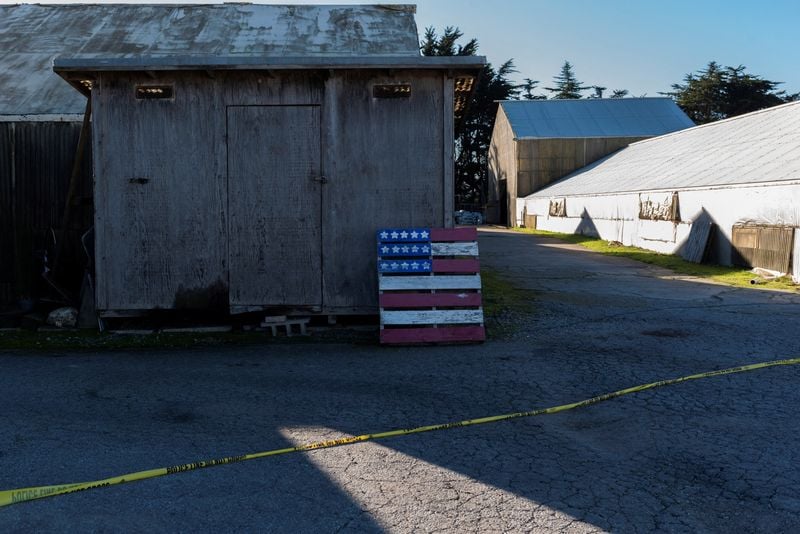 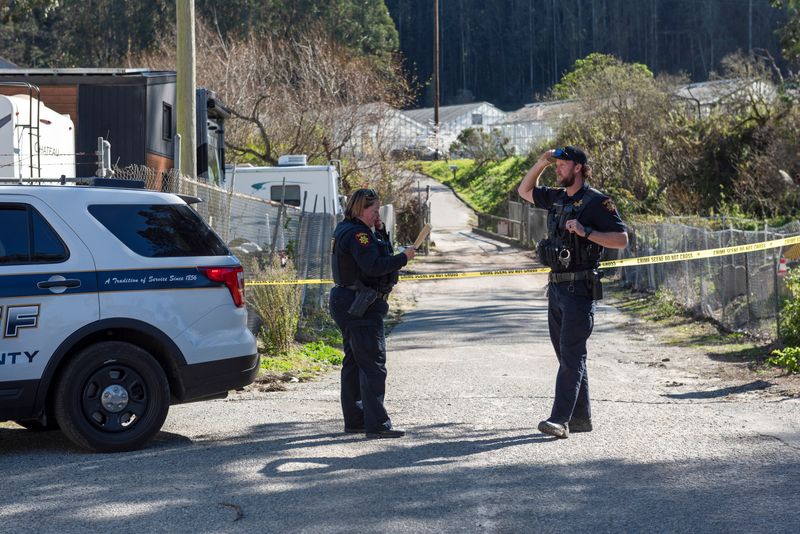 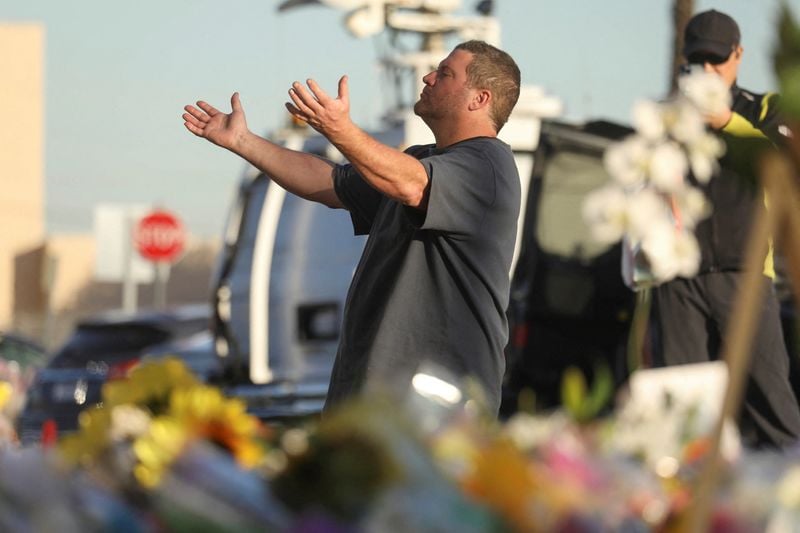 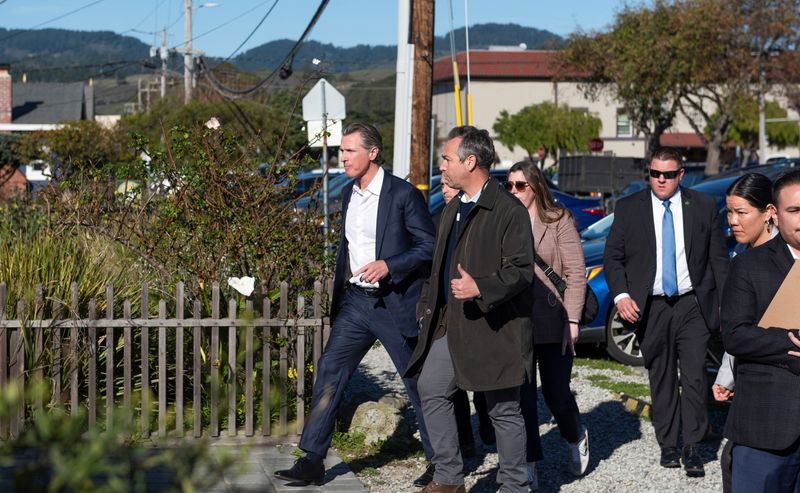