Trump broke his silence as Elon Musk sealed a $44 billion deal to buy Twitter, which last year permanently banned Trump citing a risk of further violence following the Jan. 6, 2021 siege by a pro-Trump mob on the U.S. Capitol.

Republicans cheered Musk’s buyout of the social media platform in the hope that the Tesla Inc Chief Executive, who has vowed to relax content moderation practices to restore free speech, will invite Trump back to the site.

Since the deal was announced this week, Trump has said he would not return to Twitter.

In Thursday’s message, called a “truth” on the app, Trump wrote, “I’M BACK! #COVFEFE”, referencing a typo on a Twitter message he sent while president that complained about the press and was widely memed.

Trump’s silence on his own app since the launch of Truth Social on Apple Inc’s app store on Feb. 21 has raised questions about its long term viability.

Ahead of its launch, his son Donald Trump Jr. tweeted a screenshot of his father’s Truth Social account with one “truth” that he posted on Feb. 14, verified at the account of @reaDonaldTrump, with the message: “Get Ready! Your favorite President will see you soon!”

The deal is under scrutiny by the U.S. Securities and Exchange Commission and is likely months away from being finalized. 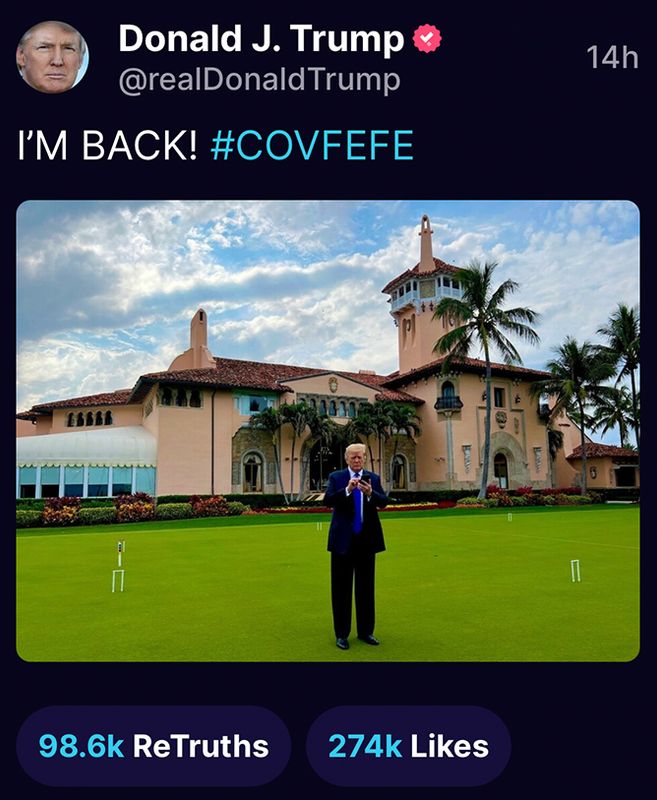