American’s love our lawyer jokes, but did you know, that lawyers are actually more well liked than doctors, hotels and restaurants when it comes time for everyone to be a critic?

A new report shows that lawyers do get more love on the internet than other industries.

A lawyer is 72% less likely than a doctor to receive a 1-star online review. The average Yelp star rating for a doctor is 3.5. For a lawyer, the average is 4.2.

The difference appears at least partially due to the polarization of patients rating healthcare experiences either more critically and more positively than other service businesses, such as restaurants and hotels. 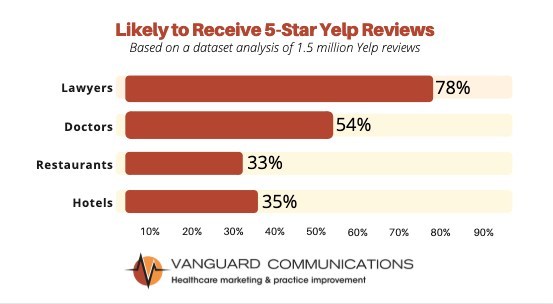 A study of nearly 35,000 online healthcare reviews, Vanguard found that 96% of unhappy patients complain not about the quality of medical care but customer service issues, such as phone hold times and wait times.

If there’s a lesson to be learned just in time for Valentine’s Day, King explains, it’s that picking a doctor can be a lot like online dating.

Related News:  Whataburger Offers Buy One Get One on Father's Day

More than 40% of patients who write 5-star online reviews gush about their doctors’ bedside manner, good communication, and staff who show love for the patients.

Trends indicate that online reviews are playing a growing role in choosing doctors for virtually all age groups. For example, the recent National Poll on Healthy Aging reports that 43% of patients aged 50-80 use online reviews to make decisions about their healthcare provider. That’s the same percentage who consider the opinions of their family and friends when picking a doctor, a surprising finding.

Related News:  There's a chance your Chinese made KN95 respirator doesn't protect you from COVID-19 afterall

“Just as in their romantic lives, people generally want long-term relationships with their doctors. You’re really looking for a professional with whom you can have respect and good chemistry with,” King says.

Photo by Hunters Race on Unsplash