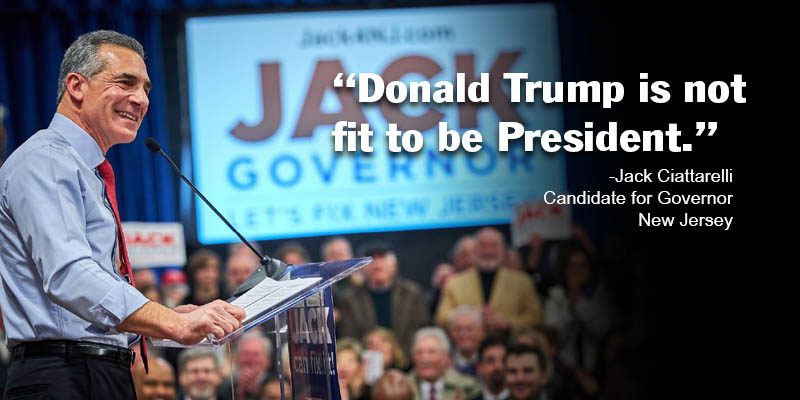 TOMS RIVER, NJ – “Donald Trump is not fit to be President.”

Those were the words of Jack Ciattarelli, a former New Jersey Assemblyman who served in office from 2011-2018.

In 2015, Cittarelli said President Donald J. Trump “Preys upon our worst instincts and fears” and “Sitting silently and allowing him to embarrass our country is unacceptable. He is not fit to be President of the United States.”

In 2016, Ciattarelli said he will not vote for Trump in the November election, even called upon Trump to end his political campaign.

He also said Trump was a charlatan who is out of step with the “Party of Lincoln”.

Ciattarelli was Trump’s most prominent and ferocious detractor during his 2017 election campaign.  Now, with the tables turned, Ciattarelli is working on improving his image with Trump supporters as he becomes the first person to officially challenge Governor Phil Murphy in the 2021 election.

Since 2015, Jack Ciattarelli has been eating his words against President Donald J. Trump.  Ciattarelli is hoping to be New Jersey’s next governor, but to get there, he faces an uphill battle with Republican voters, especially in Trump strongholds where primary voters just voted nearly 80% in favor of the Trump line of candidates in the July primary election.  Running against the Republican line in Ocean County is a death sentence for any Republican in New Jersey during primary elections.

Can Ciattarelli who was once a “Never Trumper” fix the damage he has done in time for the 2021 Republican primary election and win over the Ocean County GOP county committee to get the coveted line there?

Ciattarelli is expected to have competition in 2021 including GOP Chairman Doug Steinhardt, U.S. Senate Candidate Hirsh Singh pending the outcome of his election and New Jersey Assemblyman John Bramnick.

When former Lt. Governor Kim Guadagno announced she would also not vote for Trump for President it was the final nail in the coffin of her political career. Trump supporters in New Jersey stayed home on election day and didn’t vote for Guadagno who lost to the current Governor, Phil Murphy.

This time around, Ciattarelli has to battle through a tough Republican primary election cycle to get his name on the ballot, but will the state’s Trump base be forgiving?

Ciattarelli did attend this year’s Wildwood Trump-Pence rally and has shown light to moderate support for the President since announcing his campaign for governor.