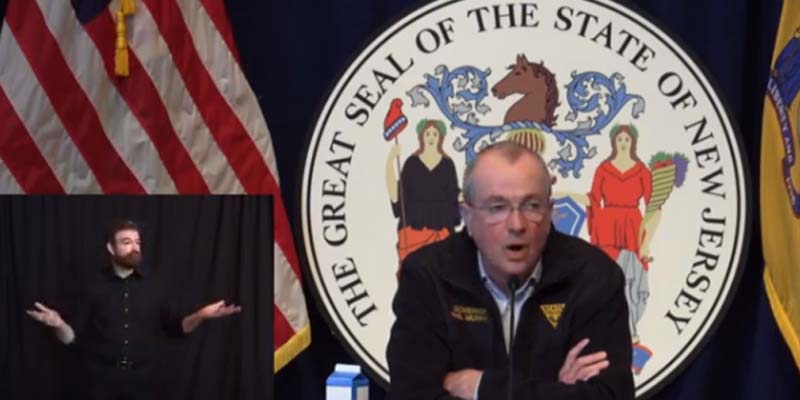 TOMS RIVER, NJ – The COVID-19 curve has flatlined in New Jersey as the state had just 179 new cases per day as of July 19th.  Hospitalizations are down 96% since the peak of the outbreak and hospitals have 91% fewer COVID-19 patients today than they did just two months ago.  ICU and ventilator patients are down by 93% and 96% respectively, but Governor Phil Murphy said it’s not time to spike the football just yet…have the goalposts moved yet again?

Now, Murphy’s daily numbers, which were all over the map previously are now being skewed by lab errors and testing delays, the Governor said on Wednesday.

“The daily percent positivity for tests recorded on July 18, that was Saturday, 2.48%. I think, Judy, you and I discussed earlier, we have no reason to believe that that’s not accurate, that the pool of tests that we may still be having data issues with would give us a result different than this,” the Governor said. “We’re still showing a rate of transmission, or RT for New Jersey at 0.90. I want to warn that that may not actually, given the data challenges that the country is having and some of these labs are having, we’re not as sure about that, as we are about the spot positivity. We think it is in the range of where it’s been. We wouldn’t put the number up there if we didn’t think that was approximately correct, but I’m going to use the word approximate today, just because there’s enormous amount of stress on labs and there is clearly some data distortion.”

“First, we’re reporting another 390 positive test results for a statewide total of 177,645 since test 1 on March 4th. We know one thing. We do have at least 390 new positive cases. There may be some number or more from the past couple of days — that’s almost 400, folks. So the folks out there who think that we’re in the end zone and we can spike the football and do a touchdown celebration, we’re not there. We’re just not there. Now, we’re a lot better than we were but we’re just not there yet,” the Governor said.

“As we note every day, daily positivity and rate of transmission are among, if not the best, indicators related to the continuing spread of coronavirus. As I said on Monday, a couple of days ago, we noted there have been issues with results coming from one of the private labs, and that that issue may be impacting not just our case count, but again, I think Judy, you think that’s in the few hundred over a number of days, but also less likely spot positivity, but rate of transmission,” Murphy said. “As we know more about this and as backlog results come in, obviously we will update the data as we report accordingly and Judy will give you some more color. However, no matter what the numbers say, there is no reason for us to give up one bit on our social distancing or in our need for you all and all of us to wear our face coverings when out in public. In fact, these practices are how we are keeping these numbers as low as they are. So folks, let’s keep them low.”