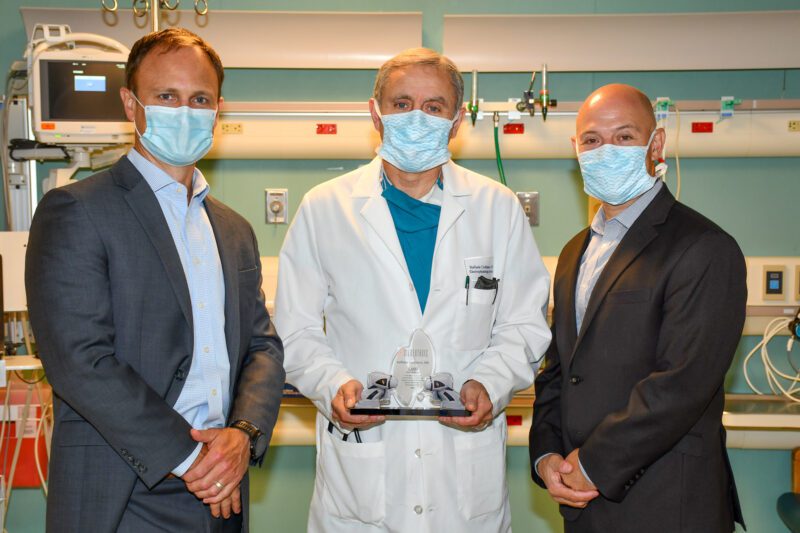 Deborah Heart and Lung Center recognizes September as Atrial Fibrillation Awareness Month. Atrial fibrillation (A-fib) is the most common heart arrhythmia, causing an irregular, often rapid, heart rate triggered by chaotic electrical signals. According to the CDC between 2.7 and 6.1 million people in the United States have A-fib, and this number is expected to increase as the population ages. Left untreated, A-fib can be fatal.

Deborah Heart and Lung Center — New Jersey’s only specialty heart, lung, and vascular hospital, and an Alliance Partner of Cleveland Clinic’s Heart, Vascular & Thoracic Institute — treats A-fib with sophisticated cardiac catheter ablation, also called radio frequency ablation. Patients undergo a minimally-invasive procedure that uses a catheter navigated through the blood vessels and into the heart. The catheter then delivers energy to precise parts of the heart muscle, normalizing the electrical signals and returning the heart to normal healthy rhythm.

As one of only 100 hospitals in the world with the Stereotaxis Robotic Magnetic Navigation system, Dr. Corbisiero is confident that the Hospital provides a minimally-invasive treatment with unsurpassed safety. “Robotic ablation allows for safer and more effective cardiac ablation procedures, including reduced risks of complications like perforation of the heart tissue.”

“Though patients receive treatment for a potentially life-threatening condition, they undergo a short procedure time and a fast recovery time, so they can return to normal activities within a few days,” said Dr. Kazemian, who is a world leader in pioneering the use of fluoroless – or zero fluoroscopy — robotic A-fib ablation, which is a technique during which patients are not exposed to any x-ray radiation and the procedure instead is guided by ultrasound. “This complex technique is of great safety benefit to our patients by eliminating radiation exposure.”

“We are very proud of our procedural milestones,” added Dr. Corbisiero. “Our patients are not numbers to us, but by performing 2,000 ablations we have demonstrated a cumulative achievement and expert experience that allows us to use this technology to treat some of the sickest patients, many of whom would not be candidates for traditional treatments.”

The specialists at Deborah urge anyone who has symptoms of A-fib – shortness of breath, weakness, dizziness, lightheadedness, fainting or near fainting, and chest pain or discomfort – to make an appointment as soon as possible.

“We’re taking this opportunity during Atrial Fibrillation Awareness Month to remind everyone to take their signs and symptoms seriously,” said Dr. Hynes. “If your heart is not pumping effectively due to an irregular heart rate, you could face serious health problems.”