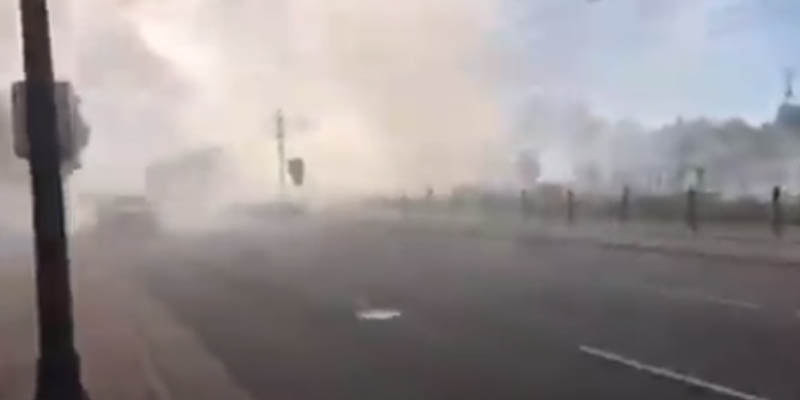 ROCHESTER, MINNESOTA – United States Attorney Erica H. MacDonald today announced the arrest of JOSE ANGEL FELAN, JR., 34, and MENA DHAYA YOUSIF, 22, for their roles in multiple arsons on May 28, 2020. FELAN and YOUSIF were detained on February 15, 2021, in Mexico by Mexican authorities for immigration violations after the U.S. Marshals Service located them. A superseding indictment charges FELAN with three counts of arson and YUSIF with being an accessory after the fact. FELAN and YOUSIF made their initial appearances on February 17, 2021, before a Magistrate Judge in U.S. District Court in the Southern District of California. The defendants were ordered to remain in custody pending a formal detention hearing on February 23, 2021.

June 7, 2020: This man was seen at multiple locations igniting fires in St. Paul, Minnesota, including at Gordon Parks High School that serves disadvantaged youth. 1 week later, no one knows who he is, despite $5,000 reward offered by authorities. pic.twitter.com/5218OI5nUR


“Thanks to the skilled investigative work of the ATF and the tireless apprehension efforts of the U.S. Marshals Service these two defendants, who have been on the run for more than eight months, will be returned to Minnesota to face justice,” said U.S. Attorney Erica H. MacDonald.

According to the allegations in the superseding indictment, on May 28, 2020, FELAN maliciously damaged and destroyed by means of fire the Goodwill retail store, the Gordon Parks High School, and the 7 Mile Sportswear store, all of which were located on University Avenue in St. Paul. YOUSIF assisted FELAN in preventing his apprehension by law enforcement.

Related News:
Man Shot in the Chest and Leg in Southwest Baltimore

With fires still burning from overnight unrest, people of #StPaul showing up to begin cleaning up their city. This is outside Gordon Parks High School along University Ave. volunteer says, “it happened, now what can we do about it,” of the damage. ⁦@MPRnews⁩ #GeorgeFloyd pic.twitter.com/Ahkr3hKJsj

This case is the result of an investigation conducted by the Bureau of Alcohol, Tobacco, Firearms and Explosives (ATF), the FBI, the St. Paul Police Department, the St. Paul Fire Department, and the Minnesota State Fire Marshal Division. The fugitive apprehension efforts were led by the U.S. Marshals Service.

This case is being prosecuted by Assistant U.S. Attorneys Melinda A. Williams and Emily Polachek.

The charges contained in the superseding indictment are merely accusations, and the defendants are presumed innocent unless and until proven guilty.