TOMS RIVER, NJ – Rabbi Mordechai Sekula, operator of Bais Brucha, Inc. has filed a lawsuit against the Township of Toms River after being denied a variance to construct a synagogue by the Toms River Zoning Board. The property is located at the intersection of Hickory Street and Vermont Avenue near the border of Lakewood.

The complaint contends that the Township of Toms River has orchestrated a campaign to prevent the Orthodox Jewish community in Lakewood from growing into Toms River.

“In recent years, Orthodox Jews have been moving to Toms River–especially the township’s North Dover area–in increasing numbers. In response to the rising Orthodox Jewish population in Toms River, the Township has engaged in an orchestrated campaign to prevent that community from growing in the Township,” the lawsuit claims. “Including the passage of targeted and discriminatory zoning regulations that prevent the construction of synagogues. In order to build a house of worship–regardless of how small–anywhere within the Township, a lot greater than ten acres must be acquired, which effectively eliminates the possibility of new synagogues locating in theTownship. Many other nonreligious institutional and assembly uses require much smaller lots or even have no acreage restriction at all.”

In recent months, Toms River Mayor Maurice “Mo” Hill has been working behind the scenes with Democrats Laurie Huryk and Terrance Turnbach to convince the rest of the council to move forward on Hill’s plan to lower the town’s existing 10-acre zoning restriction on houses of worship to 2 acres.

On Tuesday, Hill and the council approved a 5-acre Islamic center to be built on Route 9.  Houses of worship are allowed on Route 9 but prohibited in residential neighborhoods in Toms River.

“Plaintiffs’ efforts to build a shul have taken place during a rising tide of anti-Semitism among the Toms River government and its population, fearful that the OrthodoxJewish community located in adjacent Lakewood Township will extend into their jurisdiction,” the complaint reads.

In recent months, Hill and his allies on the council have been pushing to settle lawsuits by developers that they had promised earlier to fight.

“Plaintiffs believe that Orthodox Jews must live within walking distance of the synagogue because they are prohibited by Jewish law from driving to synagogue on the Sabbath and on numerous holy days throughout the year,” the lawsuit reads.

The lawsuit references several non-religious land-use restrictions by the town which allow for hotels, veterinary clinics, daycare, and other commercial businesses to operate on much smaller properties and claims the township is targeting houses of worship.

On August 26, 2020, Plaintiff Bais Brucha filed an application with the Township for a zoning permit to construct a 4,680-square foot house of worship on a vacant lot adjacent to the existing dwelling on the Subject Property. In September, that application was denied by the zoning board.

“Significant hostility against Orthodox Jews exists on the part of the government and residents of Toms River,” the plaintiff claims. “The Township has been responsive to local Toms River residents’ hostility toward orthodox Jews.”

The plaintiff also cites the 2017 Toms River election in which Laurie Huryk and Terrance Turnbach ran on a solid anti-Jewish, anti-development campaign that superimposed their political opponents onto postcards that claimed they had sold out to Lakewood developers and that Huryk and Turnbach would “Stop Lakewood Style Development”.  Huryk and Turnbach also printed and distributed a fake newspaper to scare residents into believing the Republicans would turn Toms River “into Lakewood”.   A photoshopped sign on those mailers read, “Welcome Lakewood Developers” with their opponent’s heads superimposed onto a body with a fake “thumbs up”.  Now, Turnbach and Huryk are threatening to silence those who speak of the words they pushed in their 2017 campaign. 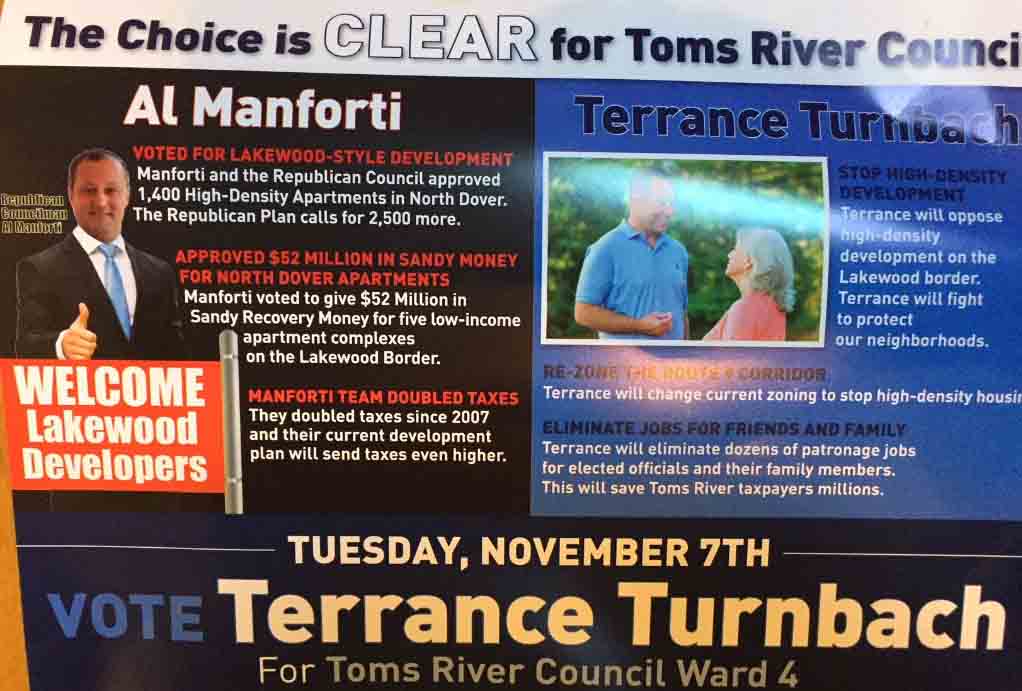 Turnbach, a criminal defense attorney whose firm represents rapists and child sexual predators,  and Huryk now support the two-acre zoning change, the couple said at a recent town hall meeting. Huryk and Turnbach won that 2017 election by stoking the anti-Orthodox fears of Toms River residents.  The two, who now have flip-flopped on their anti-Lakewood development stance were not mentioned or named in the lawsuit.

Two years ago, Hill drafted an ordinance to change the zoning requirements for houses of worship, but after the backroom ordinance was made public by Shore News Network, Hill backed off the ordinance, even claiming he had nothing to do with it.

Huryk, in an Asbury Park Press article, called Hill a liar and claimed Hill did know about the ordinance and it was a combined work of Hill, Huryk, and Turnbach.

The plaintiffs are asking the court to overturn Toms River’s 10-acre house of worship ordinance and for the township to admit that the ordinance is unconstitutional.

They are also asking for damages and attorney fees.