KENOSHA, Wis. -Jurors heard two very different portrayals of U.S. teenager Kyle Rittenhouse on Tuesday as prosecutors described him as a vigilante who killed two protesters and defense attorneys depicted him as a scared kid who protected himself from a mob.

Rittenhouse, 18, has been charged with killing two protesters and wounding a third with a semi-automatic rifle during unrest in Kenosha, Wisconsin, over the police shooting of a Black man on Aug. 25, 2020. Rittenhouse has pleaded not guilty to homicide and attempted homicide charges.

The dueling narratives came on the first day of testimony in what is poised to be the biggest U.S. court test of a civilian’s right to self-defense since George Zimmerman was acquitted in 2013 in the fatal shooting of Trayvon Martin, an unarmed Black teenager, in Florida.

In his opening statement, defense attorney Mark Richards stressed that two of the men whom Rittenhouse shot had reached for his rifle, causing the teen to fear it would be used on him. A third man was armed with a handgun, Richards said, and was part of a mob that “attacked him in the street like an animal.”

In contrast, Kenosha County Assistant District Attorney Thomas Binger painted Rittenhouse, who was 17 at the time, as the aggressor. He repeated seven times in his opening statement that the teenager was the only person to have shot anyone on a night when hundreds of protesters had taken to the streets, some peacefully and others engaged in arson, looting and rioting.

The unrest in Kenosha erupted after a white policeman shot and seriously wounded Jacob Blake, a Black man. That shooting took place against the backdrop of nationwide protests over racism and police brutality following the May 2020 murder of George Floyd, another Black man, by a policeman in Minneapolis.

Rittenhouse has emerged as a hero to some conservatives who believe in unfettered gun rights and see the shootings as justified during the chaos in Kenosha, while many on the left see him as an example of a gun culture run amok.

Richards suggested that Rittenhouse would take the stand to testify in his own defense.

‘HE WAS FREAKING OUT’

Rittenhouse, a resident of Antioch, Illinois, is charged with reckless and intentional homicides in the killing of Joseph Rosenbaum, 36, and Anthony Huber, 26, and attempted homicide for wounding Gaige Grosskreutz, now 27, with a bullet to the arm.

The prosecutor said the evidence would show that of the four bullets fired at Rosenbaum, the one that killed him was to his back. Rosenbaum, who was chasing the teenager, threw a plastic bag containing toiletries at him but was unarmed. Binger said Rittenhouse fled the scene without providing first aid.

Richards, the defense attorney, contended that Rosenbaum was “ultimately the individual who lit the fuse that night.”

Some legal experts https://www.reuters.com/world/us/prosecutors-face-tough-test-trial-us-teenage-protest-shooter-rittenhouse-2021-10-28 have said the prosecution faces a tough task in convincing a jury that Rittenhouse did not fear for his life. Under Wisconsin law, people can use deadly force if they “reasonably” believe it necessary to prevent someone from killing or causing great bodily harm to them.

Dominick Black, the trial’s first witness, testified that he and Rittenhouse had spent part of Aug. 25 helping clean graffiti off a local school before returning at night armed to protect a used-car dealership.

Black, who has been charged criminally with purchasing the rifle for Rittenhouse in 2020 because the defendant was too young to buy it legally, said he spoke with Rittenhouse minutes after the shootings and described him as distraught.

“He was freaking out. He was really scared, pale, sweating a lot,” said Black, who was dating Rittenhouse’s sister at the time. “He said he had to do it, it was self-defense, people were trying to hurt him.”

The second witness was FBI agent Brandon Cramin, who was asked about aerial surveillance the night of the shooting. Kenosha County Circuit Court Judge Bruce Schroeder shut off public access to the audio and video feed of Cramin’s testimony. 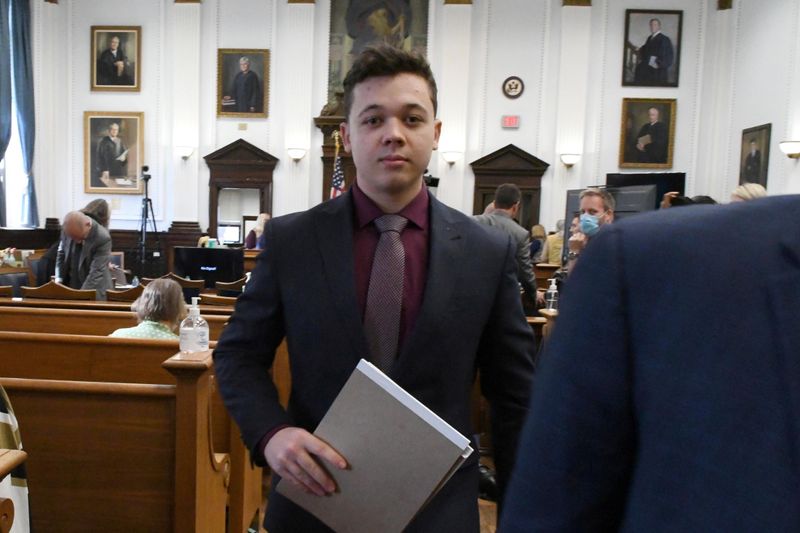 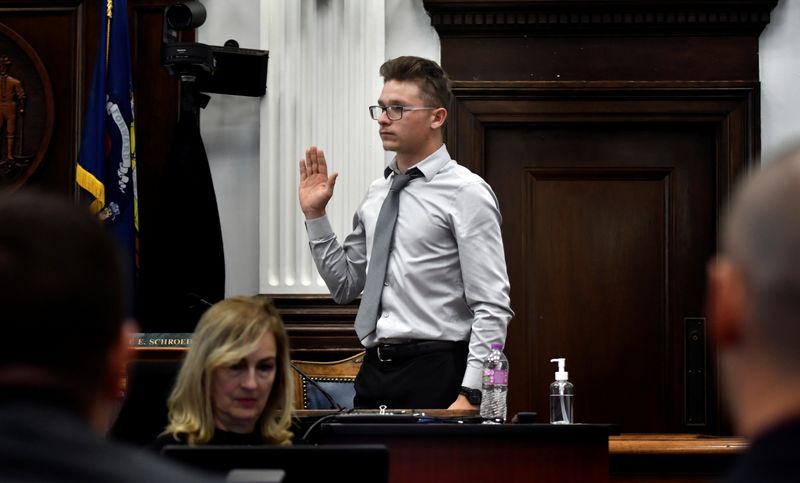 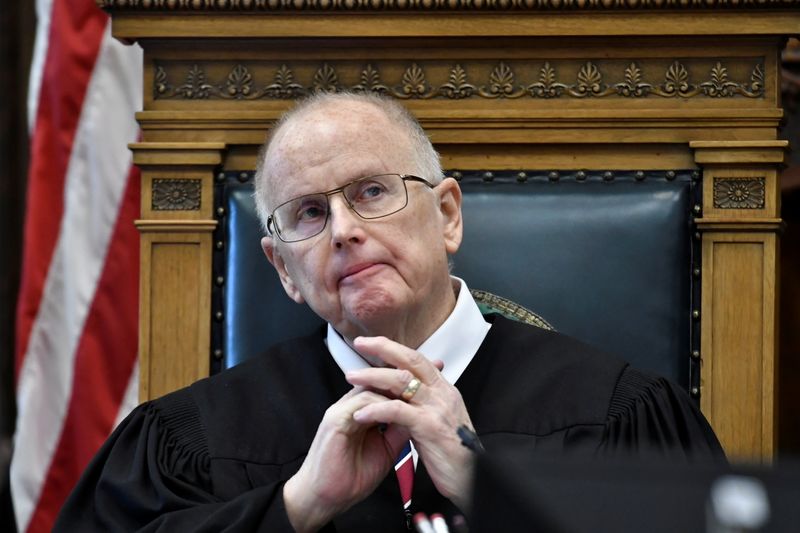 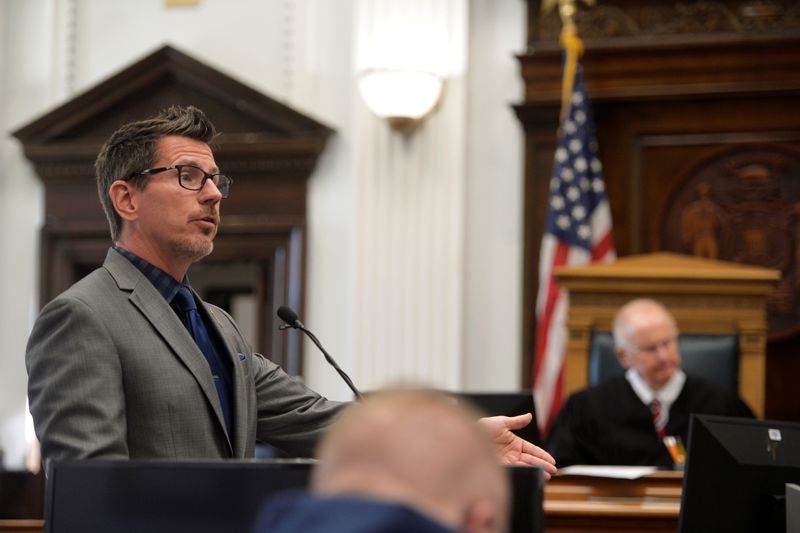 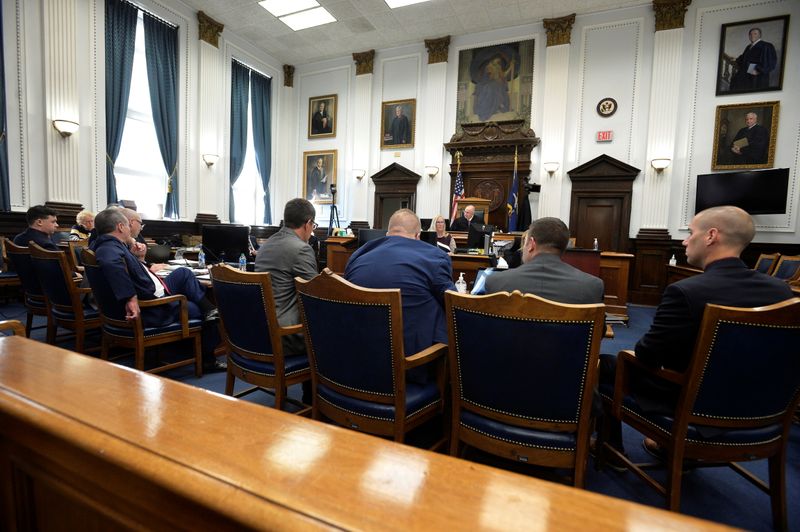