– Nicaraguan President Daniel Ortega is poised to win https://www.reuters.com/world/americas/nicaraguas-ortega-seen-tightening-grip-election-that-critics-call-sham-2021-11-01 a fourth consecutive term in Sunday’s presidential elections, extending his run as the longest-serving ruler in the Americas until at least January 2027.

Following more than three years of crackdown on dissent, the election has been criticized as anti-democratic by powers including the United States and the European Union, raising questions about what the fallout could be.

Following are some possible scenarios:

U.S. officials told Reuters https://www.reuters.com/world/exclusive-us-preparing-new-sanctions-response-nicaraguas-nov-7-election-2021-10-29 they are working with international partners on new sanctions that could be slapped on the Ortega administration after the election, and the U.S. House of Representatives on Wednesday voted overwhelmingly in favor of legislation clamping down on Nicaragua.

Ortega has said he will not bow to sanctions and many analysts are skeptical, with sanctions having done little to effect change in Cuba and Venezuela.

“If they keep coming in a disorganized fashion, without clearly defined objectives, they won’t have the desired effect of bringing about some kind of change,” said Tiziano Breda, an analyst at the International Crisis Group think tank.

Some analysts argue sanctions could provide a scapegoat for which Ortega and his wife, Vice President Rosario Murillo, can blame poor economic performance.

Others speculate the administration will seek to buy time by releasing opponents held in jail who their supporters say are political prisoners.

Increased international isolation could ultimately end up pushing the Ortega administration closer to competitors of the United States such as China and Russia.

Between 2000 and 2017, Nicaraguan gross domestic product grew an average 3.9% per annum, driven by remittances and foreign direct investment. But between the onset of political crisis in 2018 that led to clashes between business leaders and the administration, to 2020 and the coronavirus pandemic, GDP contracted by an accumulated 8.8%.

Some analysts believe that Ortega and Murillo will seek to lift the economy by negotiating behind the scenes with leading business groups.

Over the short term, Nicaragua should be able to count on support from the Central American Bank for Economic Integration (CABEI) and the International Monetary Fund (IMF).

However, even if dialogue with business yields fruit, the economic impact is likely to be modest, said Oscar Rene Vargas, a Nicaraguan political analyst at the CEREN think tank in Managua.

Further crackdowns on dissent and economic weakness could spur additional emigration to the United States.

The number of Nicaraguans detained at the U.S. southern border has leapt dramatically in 2021, from 575 in January to 13,391 in July, according to official data.

An increase in the number of Nicaraguans living abroad has also boosted remittances to the Central American country, and may act as an escape valve for some internal dissent.

Between 2017 and 2020, money transfers from abroad grew 33% to $1.85 billion. Remittances are worth some 15% of Nicaragua’s GDP, one of the highest percentages in Latin America.

Major protests against the Ortega government began in April 2018. At least 300 people died in the subsequent crackdown and over 150 more remain behind bars, according to human rights organizations.

This year, 37 more Ortega adversaries, including seven presidential candidates, were detained for conspiracy and treason, while the Supreme Electoral Council stripped three parties of legal status and Congress did the same https://www.reuters.com/world/americas/nicaraguan-government-cancels-registration-six-foreign-ngos-2021-08-16 for 45 civil society groups, including six foreign NGOs.

With many opposition leaders now out of the country, behind bars, or subject to judicial constraints, repressive measures may ease once Ortega has secured another term, analysts say.

However, the possibility remains that the crackdown could extend deeper into the civilian population.

The quashing of criticism has made it hard for the opposition to forge a united front. Some leaders have urged the public to spoil their ballots in the election, others to abstain, and some have been accused of falling silent.

The next chance the opposition has to make its voice heard will be in municipal elections at the end of 2022 – assuming the government meets the minimum democratic guarantees they ask for. 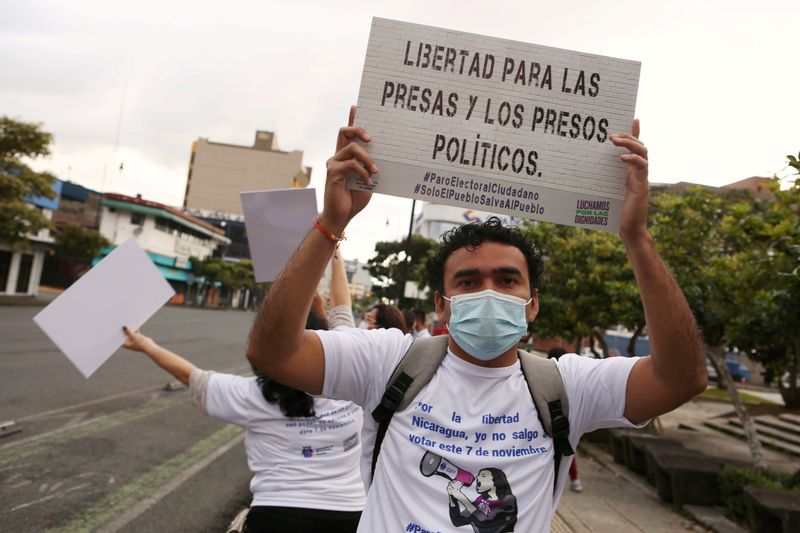