SYDNEY – Australian employment suffered a shock fall in October and the jobless rate jumped as coronavirus lockdowns continued to plague the labour market, though all signs point to a rapid recovery now that the economy is reopening.

Data on Thursday from the Australian Bureau of Statistics (ABS) showed employment fell by 46,300 in October, confounding analysts forecasts of a 50,000 increase.

The unemployment rate climbed to 5.2%, from 4.6%, well above the 4.8% forecast, while participation rose by less than expected to 64.7% with many still unable to look for work.

The surprise likely had much to do with the timing of the jobs survey which was taken from Sept. 26 to Oct. 9 when restrictions in New South Wales were just being eased and Victoria state was still locked down.

As a result, while employment rose by 22,000 in NSW, it fell 50,000 in Victoria and dragged the national result down. Other indicators of the labour market have been much stronger as stay-at-home restrictions were steadily removed.

“The spike in the unemployment rate confirms that there will be some frictional unemployment through the next couple of months,” said Sarah Hunter, Chief Australia Economist for BIS Oxford Economics.

“But with vacancies still running at record highs this fallout should be largely transitory.”

The soft report knocked the local dollar down 20 ticks to $0.7322 and the market slightly pared bets on an early hike in interest rates from the Reserve Bank of Australia (RBA).

Futures have been pricing in a first rise to 0.25% by June and rates of at least 0.75% by the end of next year, even though the central bank says any move in 2022 is “extremely unlikely”.

Business surveys show demand for workers running strongly in the past month, while a survey of consumers out this week showed concerns about unemployment were at their lowest since the mid-1990s.

Online job site SEEK reported a 10% jump in ads in October, putting them a whopping 54% above where they were in December 2019 before the pandemic hit.

The number of applications for each job was almost 49% below pre-pandemic levels, an indicator of the tightness of the labour market as international migration has yet to re-start.

While this imbalance had produced pockets of wage heat, there was little sign as yet of the broad-based pick up that policy makers would like to see.

Key data on wages for the third quarter are due on Nov. 17 and any surprise on the high side would support the case for an earlier start to policy tightening.

Analysts look for annual wage growth to pick up to around 2.1%, from 1.7% in the second quarter, but remain well short of the 3%-plus levels the RBA is looking for.

The central bank argues further progress will be slow given the last time wages grew at 3% or more was in early 2013 and liaison with firms show an ingrained reluctance to pay more. 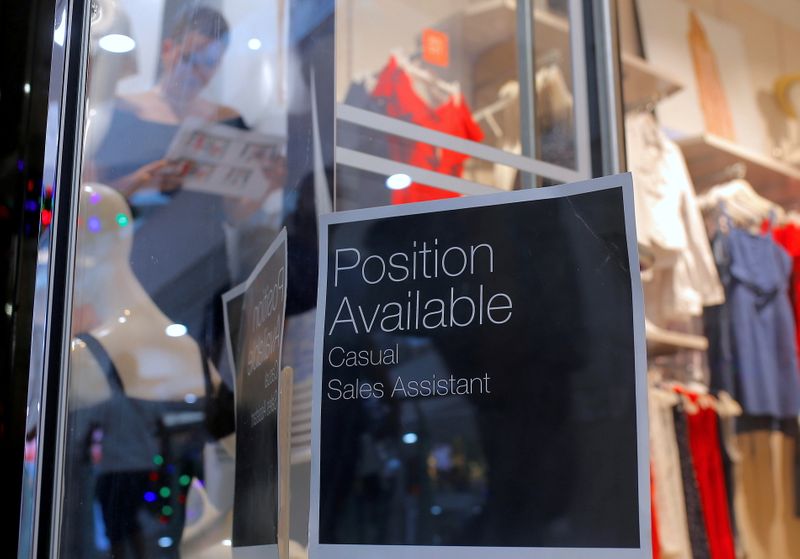