LONDON – Britain still has an acute shortage of heavy goods vehicle (HGV) drivers but the rate at which people are leaving the sector is at least slowing, an industry group said on Monday.

Logistics UK, which represents freight and haulage businesses, estimates the country lacks around 120,000 drivers, shortages that have disrupted supply chains and left gaps on supermarket shelves.

That reflects the tens of thousands who returned to the European Union after Brexit and the cancellation of 40,000 truck driver tests during COVID-19 lockdowns.

Logistics UK said the number of HGV drivers fell 44,000 in the third quarter of 2021 compared with the same time in 2019, leaving the workforce 14% smaller than it was at the outset of the pandemic.

“It is still at an acute level but we are beginning to see those little green shoots that we couldn’t see before” said Director of Policy Elizabeth de Jong.

Early signs of improvement included applications for provisional licences three times higher than pre-pandemic levels and a 25.6% increase in HGV driver testing in the third quarter versus 2019.


Pay increases of up to 29% were helping, as were promises to invest in improving driver facilities.

The government is also investing in “Skills Bootcamps” to train up to 5,000 people, while apprenticeships have been introduced to attract younger drivers.

In October the government announced 4,700 temporary visas for overseas drivers for food supply and 300 for fuel supply for a three-month period, following a fuel crisis.

De Jong said the government has not told Logistics UK how many of these visas have been issued. The industry group said in a report that much more needs to be done.

“Without further progress on training, visas rules and HGV facilities…shortages will exacerbate existing disruption to supply chains, further embed inflation above the Bank of England’s 2% target and hamper the UK’s development as a modern, digital economy,” it said.

It said consumers may notice reduced ranges at online retailers and longer delivery times this Christmas. 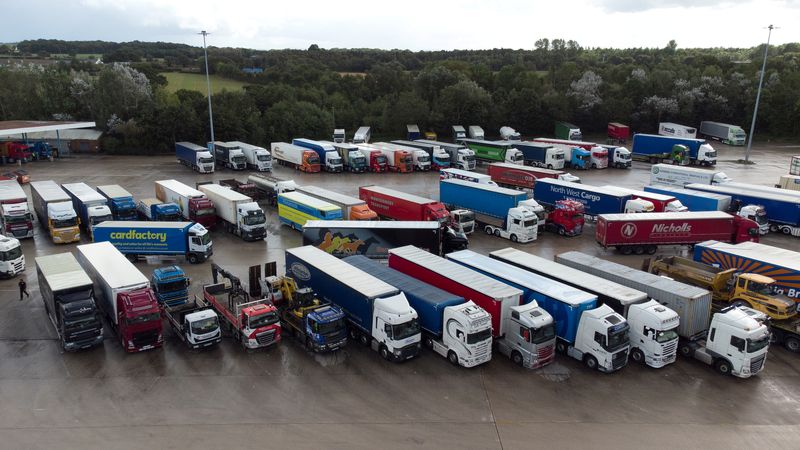