NEW YORK – Investors are bracing for the last Federal Reserve meeting of the year, with market participants hungry to learn how quickly the central bank plans to finish unwinding its bond-buying program and pick up signs of when it may start to raise rates in 2022.

Stocks are back at record highs following last week’s selloff – a market spasm brought on by worries over the Omicron variant of the coronavirus and comments from Fed Chairman Jerome Powell, who said the central bank may discuss speeding up the reduction of its $120 billion per month bond buying program at next week’s meeting.

There is potential for renewed volatility, however, if the Fed takes a more hawkish than expected view on rolling back the easy money policies that have helped stocks more than double from their March 2020 lows, including a rapid reduction in bond buying that clears the way for the central bank to raise rates sooner.

Markets could also be roiled if the Fed signals greater worry about inflation, which Powell said can no longer be described as “transitory.” Data on Friday showed consumer prices last month notched their largest annual gain in nearly four decades, bolstering the case for higher rates.

“The biggest factor in the equity market remains and will remain to be interest rates,” said Jack Ablin, chief investment officer at Cresset Capital Management.

Higher yields – which can rise on expectations of tighter monetary policy – can dim the allure of stocks by creating a greater discount for companies’ future cash flows, potentially pressuring valuations that are already elevated by historical standards.

The S&P 500, which has climbed 25% this year, is trading at 20.5 times forward 12-month earnings estimates, compared with its historic valuation average of 15.5 times, according to Refinitiv Datastream.

The yield on the benchmark 10-year Treasury note has climbed about 15 basis points from the start of the month to 1.49%, but is below the 1.776% it reached in March.

Some stocks have already been hit by higher rate worries this year, including technology and growth companies that thrived during 2020’s lockdowns.

The broader market, however, has generally tolerated tightening monetary policy, analysts at BofA Global Research said in a recent report, noting that stocks mostly climbed as the Fed normalized policy in the last decade.

The Fed last month began “tapering” its purchases of Treasuries and mortgage-backed securities at a pace that would have put it on track to complete the wind-down by mid-2022. Following Powell’s comments, investors now believe the Fed could quicken the pace of reductions that will end the bond-buying by March, which could allow the central bank to potentially start raising rates sooner.

Bets on earlier rate increases have also grown. Traders late on Friday saw a more than 50% chance of a rate hike by May 2022, up from a roughly 30% chance a month ago, according to the CME Group’s FedWatch program.

Investors are also keen to learn the central bank’s view on the Omicron variant’s potential impact on economic growth or inflation.

One possible scenario outlined by UBS Global Wealth Management in a report sees the virus complicating supply-chain issues that have helped stoke inflation in recent months, bringing concerns the Fed may need to tighten monetary policy faster. The bank’s base case scenario, however, assumes the Omicron variant will not derail the recovery.

Mona Mahajan, senior investment strategist at Edward Jones, said the Fed meeting could bring more clarity to investors after an upsurge of volatility in recent weeks.

“It feels like the market has climbed two walls of worry already: Omicron and the path of the Fed,” she said. “I do think over the next couple of weeks we will get a little bit more certainty on both fronts.” 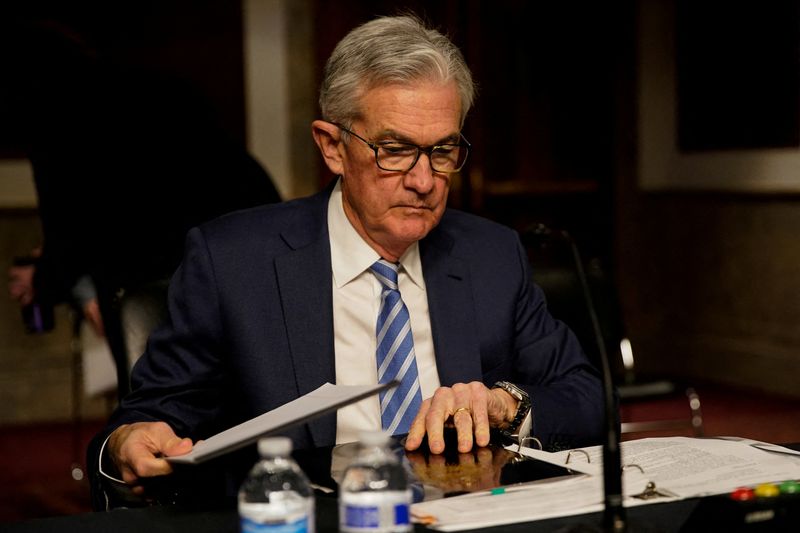