KABUL – Afghanistan’s central bank said on Tuesday it was working to ensure the stability of the afghani, a day after the currency lost almost 12% of its value against the dollar in a matter of hours amid a deepening economic crisis and soaring inflation.

The abrupt withdrawal of foreign aid following the Taliban victory in August has left Afghanistan’s fragile economy on the brink of collapse, with prices for food, fuel and other basic staples rising rapidly out of reach for many.

The central bank issued a statement saying that it had held a number of meetings with foreign exchange dealers, representatives of commercial banks and the business sector to halt the fall in the afghani.

“Based on its strategic planning policies, Da Afghanistan Bank has always tried to avoid volatility that could be harmful to the purchasing power of the people,” it said.

A meeting of the council of ministers also instructed the government’s economic commission to “take urgent steps to ensure the stability of the afghani”, Taliban spokesman Zabihullah Mujahid said in a statement.

The crisis has accelerated sharply in recent days. On Monday the afghani, which traded at around 77 to the dollar before the fall of Kabul and at 97 a week ago, dropped from 112 to the dollar in the morning at Kabul’s Sarai Shazada money market to 125 by the afternoon.

On Tuesday it had recovered slightly and was being quoted at around 114-115 following the central bank move.

“The Islamic Emirate said it would bring the dollar down and issue dollars on the market and it’s changing now,” a dealer at Sarai Shahzada said, using the name for the new Taliban government.

However the pressure on the afghani has already had a stark impact on the prices of daily necessities in an economy where unemployment is widespread and where even many in work have not been paid in months.

Surveys by the World Food Programme showed an estimated 98% of Afghans were not eating enough, with seven-in-10 families resorting to borrowing food,

Starved of dollars that used to be physically shipped into Afghanistan, and cut off from the world financial system by the fear of U.S. sanctions, the banking system is only partially functional and some $9 billion in central bank reserves remain blocked outside the country.

Last week, the U.S. Treasury Department formalised guidance allowing personal remittances to Afghanistan and protecting senders and financial institutions from U.S. sanctions, offering some hope to those with relatives outside the country.

But efforts to bring in cash have been hampered by international reluctance to provide funds to the Taliban government, which is still not officially recognised by any other country.

Longer term, business people said prospects were hampered by the structural weakness in an economy whose main exports – apart from illegal narcotics – were dried fruit and handmade carpets, and the lack of a clear economic plan from the new government. 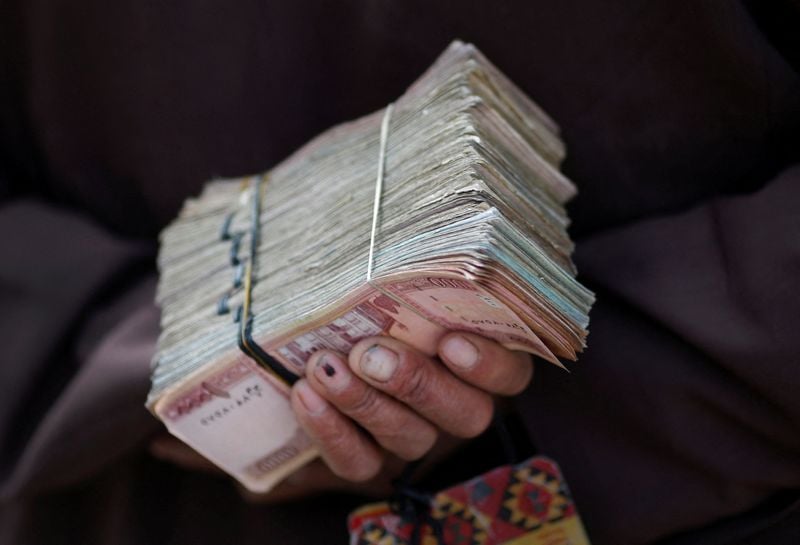