By Nevzat Devranoglu and Daren Butler

ANKARA – Turkey’s lira slid as much as 4% on Tuesday in further volatile trade after tumbling to all-time lows a day earlier on concerns over President Tayyip Erdogan’s risky new economic policy and prospects for another interest rate cut this week.

The ailing currency, which has lost almost half of its value against the dollar this year, touched 14.4 to the dollar before trimming losses to 14.3450 by 1042 GMT.

On Monday, the lira crashed as much as 7% to a record near 15 before whip-sawing back after the central bank (TCMB) intervened for the fourth time in two weeks to prop it up.

“When we look at yesterday’s trades we see a rise in volumes with strong forex demand from locals,” said a forex trader at one bank.

“The concern that the TCMB will continue with interest rate cuts is triggering an expectation of continued lira losses, so it is difficult to make an optimistic forecast for the lira.”

The domestic woes come against a backdrop of global market unease. The dollar has firmed ahead of a key Federal Reserve meeting on Wednesday, with investors eyeing the possibility that it will start to raise interest rates in 2022.

The lira slump has been driven by the Turkish Central Bank’s 400-basis-point rate cuts since September, aggressive monetary easing carried out under pressure from Erdogan.

Erdogan has repeatedly advocated for rate cuts as he promotes a new economic plan prioritising growth, credit, production and exports, despite widespread criticism of the policy from economists and opposition politicians.

With the lira selloff straining the existing budget with pending wage hikes and other new expenditures, the government is soon expected to present to parliament an additional budget for next year, two officials said.

Last week, the central bank acted to keep the lira below 14, but abandoned that level on Monday. Depreciation fuels inflation in the big emerging market economy that depends heavily on imports.

Despite inflation jumping to 21.3% last month, the bank is expected to cut the rate by another 100 basis points on Thursday, according to a Reuters poll.

The forex market interventions are an additional risk for a central bank that is not only easing policy but also has depleted foreign reserves.

Three traders estimated the central bank sold $2-2.5 billion dollars in interventions on Monday alone. According to the calculations of bankers analysing official data, sales worth $2.5 billion were carried out in the first three efforts last week. 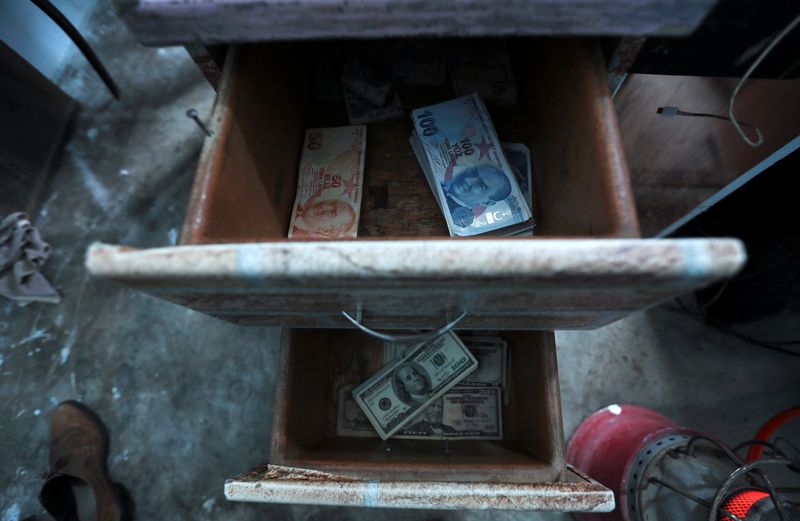