LONDON -The number of shoppers on Britain’s high streets fell by 2.6% over the weekend as the highly contagious Omicron variant of coronavirus kept people at home, market research company Springboard said on Monday.

Shopper numbers plunged 8.5% in central London on Dec. 18 and Dec. 19, compared with the number of people out a week earlier, Springboard said. Footfall dropped 6.4% in cities outside of the capital.

The outcome was better in smaller market towns, shopping centres and retail parks, with footfall up 3.4%, 0.5% and 4.7% respectively.

Separate figures from trade body UKHospitality showed a 40% fall in takings over the weekend and deep gloom about the prospects for New Year’s Eve.

British officials first voiced concern about the Omicron variant on Nov. 25. Two weeks later Prime Minister Boris Johnson stepped up COVID-19 restrictions in England, asking people to work from home, wear masks in public places and use certificates of vaccination or a negative COVID-19 test to slow the spread.

Springboard said total shopper numbers over the week to Dec. 18, traditionally one of the biggest shopping weeks of the year, were up 5.5% versus the previous week.

“The growing nervousness of consumers meant that (footfall) increases dwindled with each day that passed,” said Springboard director Diane Wehrle. “This provided a forewarning for subdued performance of bricks and mortar stores and destinations over the weekend, which … is exactly what occurred.”

Omicron has heightened fears of a muted end to the year. Last week electricals retailer Currys said its market had softened and online fashion retailer Boohoo warned on profit.

But while Britain’s economy looks set to take another hit from the latest wave of the pandemic, analysts believe it is unlikely to be anything like as severe as the plunge when the country went into its first lockdown last year.

Pantheon Macroeconomics estimated the economy was currently on course to shrink by 1% between November and January.

That would grow to a 2% contraction if the government reverts to controls it introduced last spring – which included limiting pubs and restaurants to outdoor table service – or a 6% slump in the event of a full lockdown, Pantheon said.

By comparison, Britain’s economy shrank by 19% in the April-June period of last year.

Manufacturers remained upbeat in a survey from the Confederation of British Industry on Monday.

Finance minister Rishi Sunak has been discussing possible new support measures for the hospitality industry, which has borne the brunt of the Omicron impact.

A survey from the Tourism Alliance showed a third of pubs, bars and restaurants had no cash reserves left, with 10% of pubs and 14% of restaurants very likely to fail, UKHospitality said. 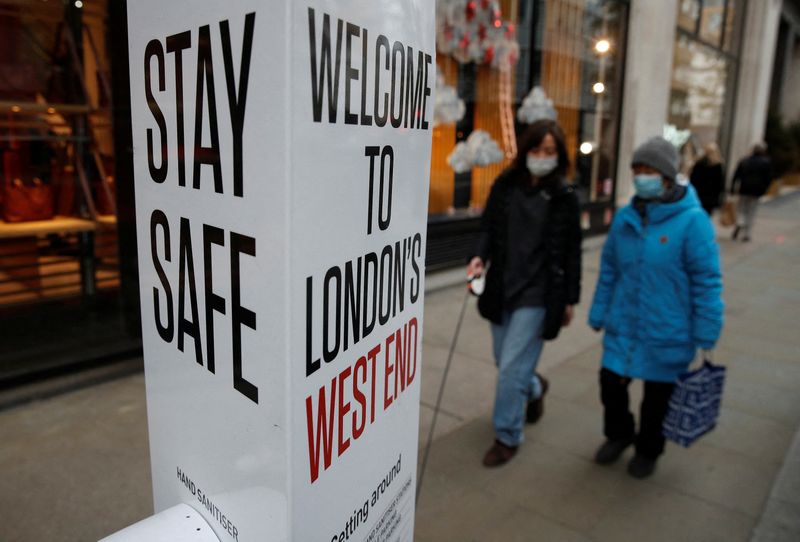