By Ted Hesson and Matt Spetalnick

WASHINGTON – The leading Republican vying to unseat an Arizona Democrat in a crucial U.S. Senate race next year gets heated when he talks about Democratic President Joe Biden’s “failed border policies,” occasionally throwing in expletives when decrying their alleged financial cost and what he says is the threat they pose to Americans.

The candidate, Arizona Attorney General Mark Brnovich, is betting the message will resonate with voters Republicans need to mobilize in the 2022 elections to change the balance of power in Congress.

“Immigration in and of itself is not a bad thing,” Brnovich, himself the son of immigrants from Montenegro and Croatia, said in an interview with Reuters. “But illegal immigration undermines the rule of law.”

Echoing some of the hard-line rhetoric of Republican former President Donald Trump, Brnovich supports the construction of a wall between the United States and Mexico and tougher immigration enforcement.

His opponent, incumbent Democratic Senator Mark Kelly, is a well-known retired astronaut and husband to former U.S. Representative Gabrielle Giffords. His seat has been rated as vulnerable by election trackers after he won a close victory in a special election last year.

While the Arizona race is one of the most high-profile contests where immigration has emerged as an attack line for Republicans, the strategy is not limited to the Southwestern border state.


Republicans across the country are targeting the policy vulnerability for Biden, whose administration has struggled to curb record arrests of migrants on the U.S.-Mexico border. Some critics say he has failed to find a consistent approach on immigration, keeping some Trump policies in place while rolling back others, inviting attacks on both the right and left.

Reuters polling backs up the idea that immigration is a prime motivator for likely Republican voters. A Reuters opinion survey in October of nearly 1,600 Republicans found immigration topped the list of issues that would make them “very angry” if the government acted in opposition to their views.

Democrats, on the other hand, did not rank immigration in any of their top 12 anger-provoking issues. Researchers have found anger is more likely to encourage voting compared with other emotions.

Heading into the November 2022 midterm elections, Democrats currently control both chambers of Congress by a narrow margin. The Senate has 48 Democrats and two independents who caucus with them to 50 Republicans, giving Vice President Kamala Harris a tie-breaking vote. In the House of Representatives, Democrats hold 221 seats to the Republicans’ 213, with one seat vacant.

As attorney general, Brnovich filed four lawsuits this year challenging Biden’s immigration actions, including a lawsuit that said Biden failed to assess the environmental effects of illegal immigration, such as pollution and stress on natural resources.

Democrat Kelly has also criticized Biden’s approach to the southern border at times, most recently sending a Dec. 16 letter to the president calling on him to close existing gaps in Arizona’s border barriers. At the same time, Kelly urged Biden to restore areas damaged by Trump-era border wall construction.


“Your administration must make it a priority to address these issues,” Kelly wrote. “Arizona deserves better from Washington on the border.”

On Monday, the U.S. Department of Homeland Security said it would take steps to close “small gaps” remaining from previous border wall construction and perform other construction work, with a focus on a stretch of the border in Arizona.

Kelly’s tougher border stance contrasts with most of his Democratic colleagues, who disdain Trump’s immigration tactics, a reflection of the threat immigration-focused attacks on the incumbent could pose in the race.

Biden took office in January promising to roll back almost all of Trump’s restrictive immigration measures, but he has so far been stymied by internal tensions within his administration and ongoing court battles.

Some of the friction has been evident on the president’s Domestic Policy Council. The council’s director, Susan Rice, has tended to push for tougher enforcement at the border, clashing at times with her own more liberal staffers, according to a former U.S. official with knowledge of the situation who spoke on condition of anonymity.

Immigrant advocates who joined the Biden administration have been disappointed with his approach to the border, including the mass deportation of Haitians caught trying to cross from Mexico, a second official, also speaking on condition of anonymity, told Reuters.


Some Biden officials have acknowledged internally that large numbers of migrants arriving at the border could derail the president’s broader immigration agenda, Reuters reported earlier this year.

Biden has left in place a sweeping Trump-era border expulsion policy implemented when the COVID-19 pandemic began, and was ordered by a court to resurrect another hard-line Trump program that forces migrants to wait in Mexico as their U.S. asylum cases proceed — both moves that dismayed advocates.

A White House spokesperson said all Biden staffers were “committed to implementing a fair and orderly immigration system,” and denied any tensions between Susan Rice and Domestic Policy Council staffers.

The spokesperson, who spoke on condition of anonymity, added that Republicans also focused heavily on immigration before the 2018 midterm elections, only to lose the House to the Democrats.

Republicans and their allies are already airing some immigration-themed commercials, a likely preview of what Democrats can expect in the coming year.

Breaking News
Over Half The Country At Risk Of ‘Energy Emergencies’ This Summer, Electric Grid Analysis Shows

The Federation for American Immigration Reform, a group that favors lower levels of immigration, launched a six-figure digital ad campaign in Texas and Arizona last week that attacks Biden and other Democrats and depicts the border as lawless.


“President Biden sabotaged the nation’s immigration controls,” a man’s voice says in the ad over video of migrants clashing with authorities in Mexico. The ad will air in Spanish and English in an attempt to reach Hispanic voters.

Texas Governor Greg Abbott and Florida Governor Ron DeSantis, both Republicans facing re-election in 2022, have emerged as leading critics of Biden’s immigration policies. Abbott and DeSantis are viewed as possible Republican presidential candidates in 2024, and the White House is closely following their gubernatorial races, according to a third U.S. official.

The Biden administration is working with allies outside of government to neutralize the criticism, said the official, who requested anonymity to discuss internal plans.

One strategy is to remind voters of Trump’s “zero tolerance” border policy, which led to the separation of thousands of migrant children from their parents and drew international condemnation, the official said.

The White House is also banking that its efforts to speed up asylum processing at the southern border – a much-touted plan that has yet to produce significant results – will gain steam next year.

“They do not view humane and lawful entry for asylum seekers as a winning thing politically,” Quigley said.


(Corrects contrast to contrasts in paragraph 16)

(Reporting by Ted Hesson and Matt Spetalnick in Washington; Editing by Mica Rosenberg and Jonathan Oatis) 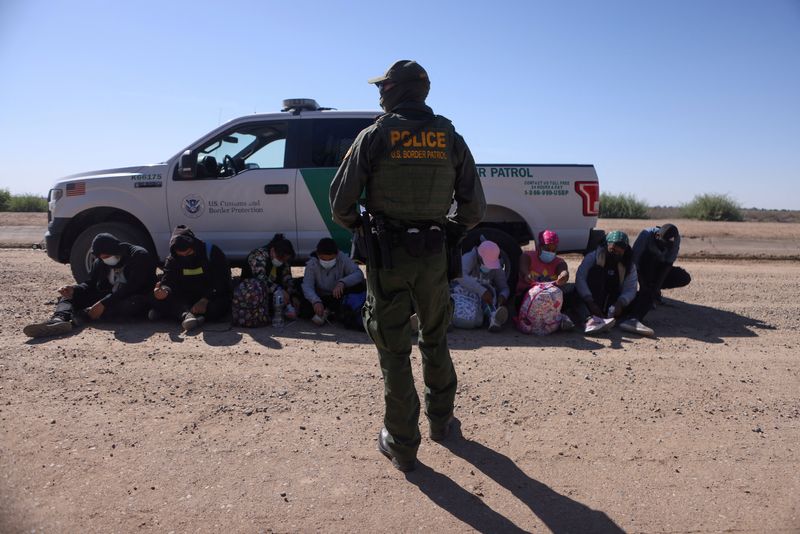