TOKYO -Japan’s exports and imports in December hit record highs in terms of their value in yen, data showed on Thursday, as supply bottlenecks eased at the end of 2021 amid rising prices.

However, a persistent semiconductor shortage remained a headache for Japanese firms such as automaker Toyota, which slashed its near-term output target this week, in addition to uncertainties around the Omicron variant.

Exports in December rose 17.5% from a year earlier, Ministry of Finance data showed, outstripping a 16.0% gain expected by economists in a Reuters poll but below a 20.5% rise in November.

Exports to the United States rose 22.1%, with car shipments marking their first year-on-year rise in five months at 11.9% as Japan’s factory output rebounded.

Imports by the world’s No.3 economy surged 41.1% in December on higher raw material costs and a weak yen, versus expectations of a rise of 42.8% and growth of 43.8% in the previous month.

“The recent combination of a weak yen and high fuel costs has brought considerable damage to Japan’s economy.”

The Bank of Japan has said a weak yen is likely to continue to positively impact Japan’s economy, even though rising import good prices hurt households.

Japan is expected to have grown by an annualised 6.5% in the last quarter of 2021 thanks to a strong rebound in consumption, the latest Reuters poll shows.

But policymakers have been wary of risks from the rapidly spreading Omicron variant, as Japan recorded its largest daily COVID-19 infections this week. 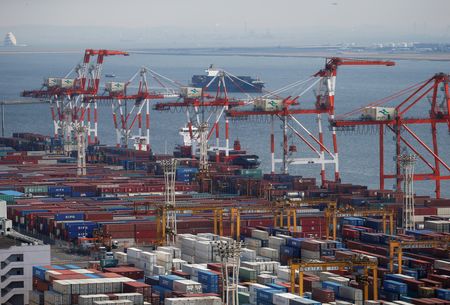