But seven dealers and three months later, the marketing consultant from the Berkshires emerged shellshocked last year – and a lot lighter in the wallet.

Along the way were several scenes from a classic farce, involving running to dealerships when cars arrived, salespeople scrambling to get keys and jacked-up prices.

Welcome to car buying in the pandemic era.

“It’s unusual and dysfunctional,” says Soffer, who ended up buying a Toyota RAV4 in December – at the Manufacturer’s Suggested Retail Price, which he considered a win. “I gave up on the idea that I would get a good deal.”

Wheeling and dealing on car prices is an American tradition, but lately the dealer is in the driver’s seat. Blame a mix of chip shortages, supply-chain slowdowns and consistently high consumer demand.

The result: The average new car price in the United States hit $47,077 in December, a new record, according to Kelley Blue Book. That is $5,742 more than the previous December – and up over $800 in a single month.

“The average price people are paying for cars is well above sticker at this point,” says Jessica Caldwell, executive director of insights for car shopping and research site Edmunds.

That lack of negotiating power filters down into auto loans. The average loan balance on new cars for 2021’s third quarter was $37,746, a new high that carries a monthly payment of $617, according to credit agency Experian. Even used cars are coming with big loans, with an average $26,230 and a $471 monthly bill.

So what is a car buyer to do? Here are tips for negotiating in this new era:

If you have to drive a certain model, with certain trims, in a certain color, then your negotiating leverage is minimal. The fewer must-haves on your list, the better for dealmaking.

“Flexibility is the key word here,” says Matt Degen, editor for Kelley Blue Book. “You want to have some wiggle room.”

The same principle applies to where you shop. Since so much car-buying takes place online these days, expand your radius far beyond just local dealerships.

USED CARS WILL NOT SAVE YOU

Traditional personal finance advice is to almost always buy used, since vehicles lose a big chunk of value the minute you drive them off the lot. Today you might be surprised.

“Used prices have skyrocketed as well, almost 30% year-over-year,” says Caldwell. “As those prices get higher, buyers are pushed further out in age – so if you were considering a three-year-old car, now you might have to go to five or seven years old.”

One bright spot for buyers is that interest rates are still fairly low, historically speaking. That means even a more sizeable loan could still be manageable on a monthly basis, especially since many automakers “subsidize” rates to offer enticing deals like 1.9% financing, Caldwell says.

The average loan rate on new cars in last year’s fourth quarter was a modest 4.2% – although the Federal Reserve has signaled its intention to raise rates in coming months, so expect pricier loans in future.

Consider coming into a car purchase with a loan preapproval from your own bank, so you are not limited to whatever financing the dealer offers.

If the price on all cars is headed up, that is good news regarding the trade-in you are currently driving. That is one area where you actually do have some negotiating leverage. And do not feel obligated to negotiate with the dealer you are buying from: You could get a superior offer from a competing dealer, or by selling privately.

USE TIME TO YOUR ADVANTAGE

If you need a car tomorrow, that is one thing. But if you can wait – continue driving your old car for another year or two, for example – then you should consider doing so. The current supply-chain nightmare will not last forever, and red-hot car prices should start to normalize.

If you do have some time flexibility, you can also consider the “European model of building your car to order,” Degen says.

More American automakers are moving in this direction, which expands your options beyond whatever dealers happen to have available – which is not a lot right now.

(Editing by Lauren Young and Rosalba O’Brien; Follow us @ReutersMoney or at http://www.reuters.com/finance/personal-finance.) 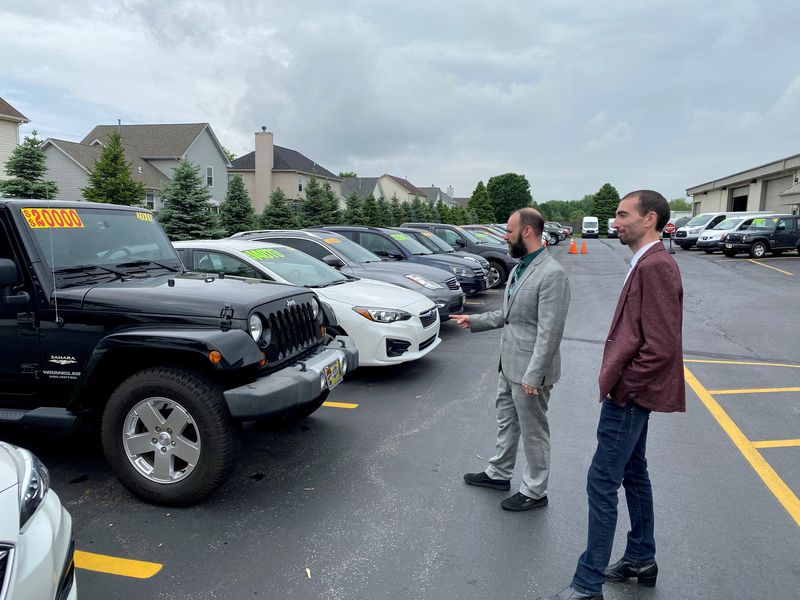