WASHINGTON -Top U.S. Senate Republican Mitch McConnell on Tuesday criticized his party’s censure of two prominent Republican critics of Donald Trump, joining an intra-party battle that could upend his efforts to project an image of party moderation in this year’s midterm elections.

Last week, the Republican National Committee censured https://www.reuters.com/world/us/loyal-trump-republican-party-moves-censure-us-reps-cheney-kinzinger-2022-02-04 Representatives Liz Cheney and Adam Kinzinger, the only two Republicans serving on the House of Representatives select committee investigating the events of Jan. 6, 2021, when supporters of then-President Trump stormed the Capitol in a failed attempt to prevent Congress from certifying President Joe Biden’s 2020 election victory.

“The issue is whether or not the RNC should be sort of singling out members of our party who may have different views from the majority. That’s not the job of the RNC,” McConnell told a news conference.

The RNC took its action on Friday, calling the Democratic-led committee’s inquiry an attack on “legitimate political discourse.”

McConnell rejected that description, saying, “We saw what happened. It was a violent insurrection for the purpose of trying to prevent the peaceful transfer of power after a legitimately certified election from one administration to the next. That’s what it was.”

The controversy comes as Republicans are hoping to regain majorities in the House and Senate in the Nov. 8 midterm elections.

McConnell, the Senate minority leader and one of his party’s most wily political tacticians, has been trying to paint Biden as a former moderate radicalized by the Democratic Party’s left wing. Projecting an image of moderation for the Republicans could help the party’s Senate candidates in key states.

Lawmakers close to McConnell have found themselves on the defensive about the RNC censure resolution.

“They said, in the resolution, they wanted Republicans to be unified. That was not a unifying action,” said Senator John Cornyn of Texas.

Senate Republican leaders were quick to acknowledge the trouble that party divisions might pose for Republican Senate candidates.

“If we want to win the elections in November, there are better things for us to be focused on,” said Senator John Thune, the chamber’s No. 2 Republican after McConnell.

“The focus right now needs to be forward, not backward. If we want to get majorities in the fall, then it’s better to turn our fire on Democrats and not on each other,” Thune added.

Others pointed to Senate Republican criticism of the RNC as a problem for candidates in some states.

“Whatever you think about the RNC vote, it reflects the view of most Republicans,” said Senator Josh Hawley, a Missouri Republican who objected to 2020 election results on Jan. 6.

“In my state, it’s not helpful to have a bunch of D.C. Republicans commenting on the RNC… super unhelpful,” he said.

McConnell has sought to cast Biden and his pricy “Build Back Better” social spending plan that is stalled in the Senate as creatures of the Democratic Party’s left wing. McConnell has accused Biden of ignoring troubles facing American families such as inflation, including higher energy costs.

“If the president starts acting like a moderate, like he campaigned, we can do business,” McConnell told Fox News last month.

While McConnell is calling for bipartisanship, he often has been a partisan warrior himself. As majority leader, he refused to consider Democratic President Barack Obama’s nominee to fill a Supreme Court vacancy and last year said https://www.reuters.com/legal/government/republican-mcconnell-signals-blockade-any-2024-biden-high-court-nominee-2021-06-14 he might block Biden’s nominees to the high court if Republicans gain Senate control. He also has used the Senate’s filibuster rule to thwart parts of Biden’s legislative agenda, including voting rights.

McConnell did deliver critical Republican votes last year for two bipartisan priorities – a $1 trillion infrastructure bill and a deal to avert a default on the federal government’s debt. Both prompted enraged statements from Trump, who has called for McConnell’s ouster from his Senate leadership post.

(Reporting by David Morgan; Editing by Will Dunham, Scott Malone and Rosalba O’Brien) 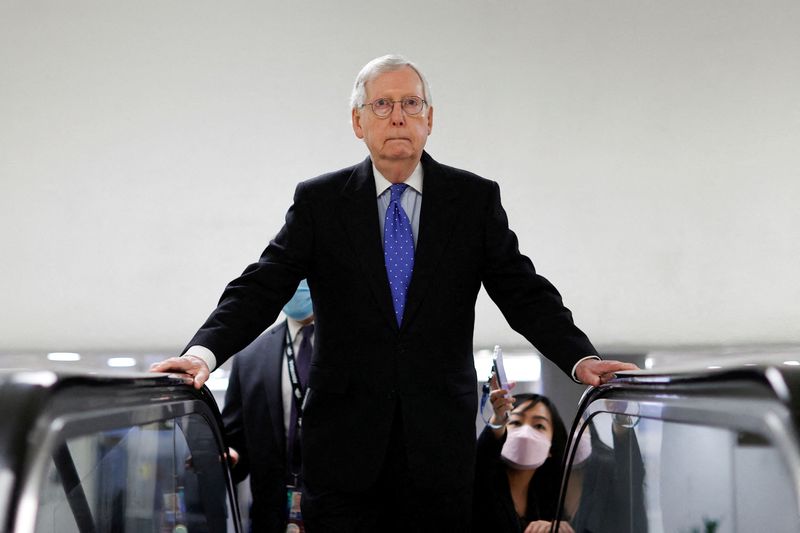