KYIV – Ukraine believes there is still a chance of resolving the West’s standoff with Russia kuleba through diplomacy but that there are already grounds to impose sanctions on Moscow, Foreign Minister Dmytro Kuleba said on Wednesday.

The United States and the European Union have threatened Russia with new sanctions if it attacks Ukraine after massing troops near its borders. Moscow denies planning an attack. [L1N2UI2JG]

“These sanctions are designed in a way that they will be imposed in the event of a further – or a new wave of – armed escalation, Russia’s armed aggression against Ukraine,” Kuleba said beside visiting Spanish Foreign Minister Jose Manuel Albares.

Ukrainian President Volodymyr Zelenskiy has said Kyiv needs action to be taken against Russia before any attack.

Kuleba said Russia had already violated international law and this provided a basis for imposing sanctions.

He was referring to Russian passports being issued to some Ukrainian citizens in separatist-controlled areas of eastern Ukraine.

“Some sanctions could have been imposed earlier as well as right now in order to demonstrate the seriousness of intentions and readiness for decisive action,” Kuleba said.

Over 700,000 Russian passports have been issued to residents of eastern Ukraine since separatists seized territory there in 2014, and Russia’s parliament is set to discuss making an appeal Putin to recognise the breakaway areas as independent states.

Russia has denied violating any international laws in its troop buildup near Ukraine. Western powers imposed sanctions on Russia after it seized the Crimea region from Ukraine and backed the separatists in eastern Ukraine. 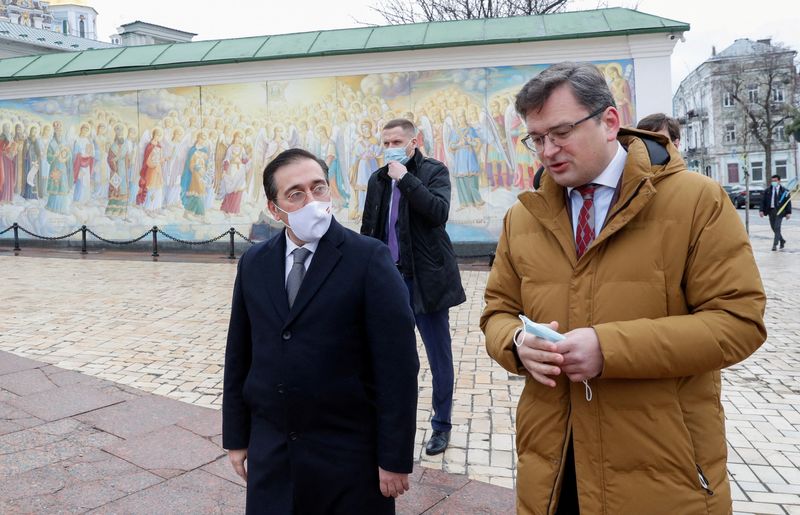