By Jody Godoy and Jonathan Stempel

NEW YORK – Sarah Palin said at her defamation trial against the New York Times on Thursday she felt “powerless” after a 2017 editorial incorrectly linked the prominent Republican to a mass shooting six years earlier, accusing the newspaper of trying to “score political points.”

Before both sides rested their cases, the former Alaska governor and 2008 Republican U.S. vice presidential candidate told jurors in Manhattan federal court that she was “mortified” after the editorial appeared to connect her to inciting murder.

“It’s hard to lay your head on a pillow and have a restful night when you know that lies are told about you, a specific lie that was not going to be fixed,” Palin testified under questioning from her lawyer. “That causes some stress anyone would feel.”

Palin, 57, said the Times was “trying to score political points,” calling the newspaper “the be-all, end-all, the loud voice in American media.” Palin likened the newspaper to the biblical giant Goliath, and herself to the underdog David.

“It was devastating to read, again, an accusation, a false accusation that I had anything to do with murder, murdering innocent people,” Palin said. “And I felt powerless.”

Under cross-examination by Times lawyer David Axelrod, however, Palin struggled to provide specific examples about how the editorial harmed her reputation, while saying that “things changed” and many people thought less of her.

Palin testified for about 3-1/2 hours over two days, following testimony by James Bennet, a former Times editorial page editor and also a defendant in her lawsuit.

Bennet said he never intended to blame Palin or her political action committee in the disputed editorial headlined “America’s Lethal Politics,” which addressed gun control and the growth of incendiary political rhetoric.

After six days of testimony, closing arguments are scheduled for Friday. Jurors may begin deliberating Friday afternoon or on Monday.

The June 14, 2017, editorial was written after a shooting that day at a congressional baseball practice in Virginia where Republican U.S. congressman Steve Scalise was wounded.

It referred to the January 2011 shooting in an Arizona parking lot by gunman Jared Lee Loughner where six people were killed and then-Democratic U.S. congresswoman Gabrielle Giffords was seriously wounded.

Bennet added language drawing a link between the Giffords shooting and a map circulated by Palin’s political action committee that the editorial said put 20 Democrats including Giffords under cross hairs.

He told jurors he had been under deadline pressure when he added the phrase “the link to political incitement was clear” to the editorial.

There is no evidence Loughner had a political motive, and the Times corrected the editorial the next day.

Palin said she believed the correction was accurate but did not “fully correct” the record, noting that it did not name her.

She faces a high legal bar to win in a trial that tests longstanding legal protections for U.S. media against defamation claims by public figures.

Palin must convince jurors there was clear and convincing evidence that the Times and Bennet acted with “actual malice,” https://www.reuters.com/article/uk-new-york-times-palin-idUKKBN25O31B meaning they knew the editorial was false or had reckless disregard for the truth.

While Palin can seek damages for harm to her reputation, U.S. District Judge Jed Rakoff said outside the jury’s presence that he would not let jurors award punitive damages. He said evidence Bennet had ill will toward Palin was “quite modest.”

‘POWER OF THE PEN’

During cross-examination, Palin agreed that the symbols on the map looked like cross hairs, but also resembled surveyor markings.

Asked if she endorsed the map, she said, “It has my name on it, so yes.”

While accusing media of abusing the “power of the pen,” she identified no one who in Axelrod’s words wanted to “go out and hunt” her because of the map.

She also identified no specific family members or close friends who flagged the editorial’s alleged unfairness.

“After the editorial, things changed in terms of being called upon to advise and to help, and to be seen publicly on a high-profile political stage,” Palin said.

Palin said she and her family in 2011 received death threats after she was wrongly linked to the Arizona attack, but did not sue because she wanted to focus on victims and not politicize the tragedy.

The Times editorial was different, she said. “I knew something had to be done.”

Palin has signaled that if she loses at trial, she would on appeal challenge New York Times v Sullivan, the 1964 U.S. Supreme Court decision that established the actual malice standard.

She was John McCain’s running mate in the 2008 presidential election, and Alaska’s governor from 2006 to 2009.

(Reporting by Jody Godoy and Jonathan Stempel in New York; Editing by Will Dunham and Richard Chang) 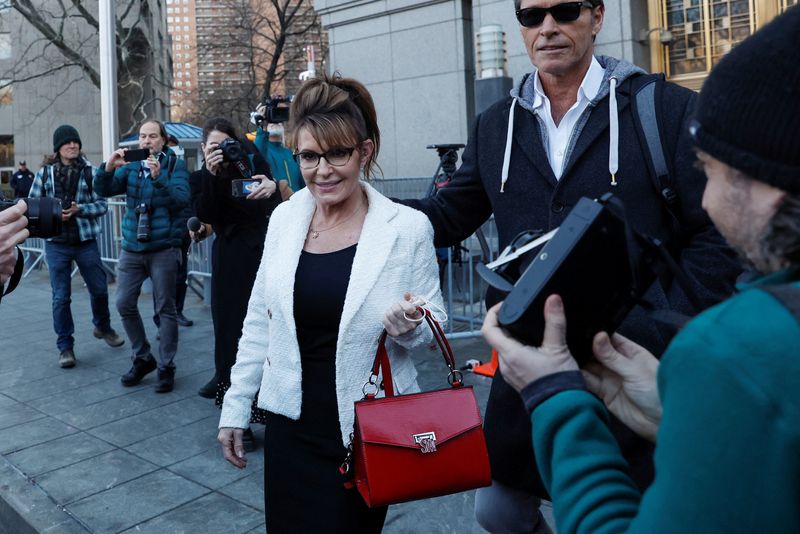 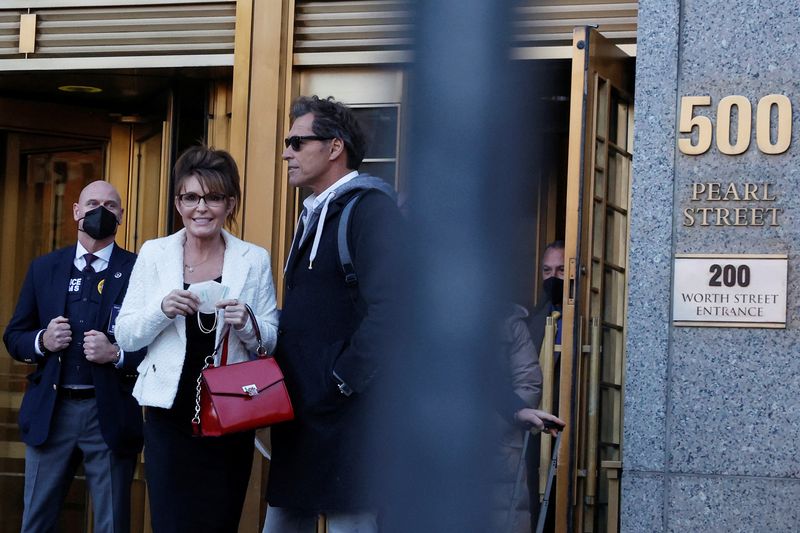 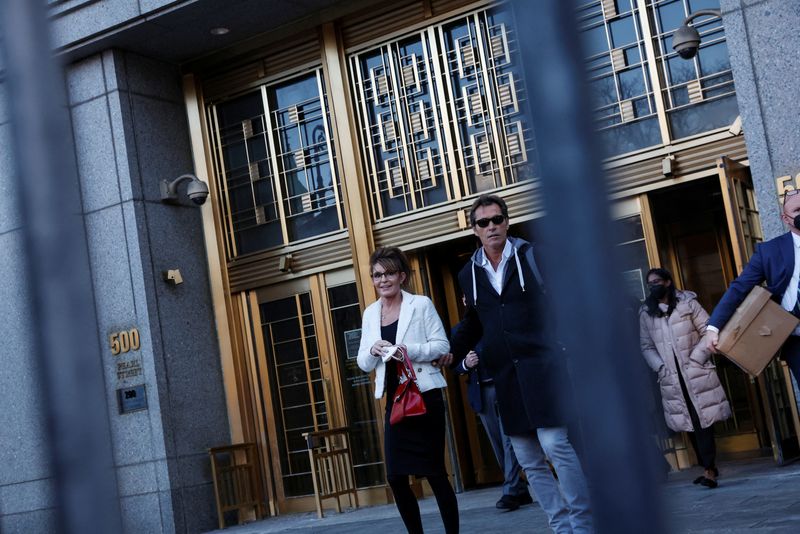 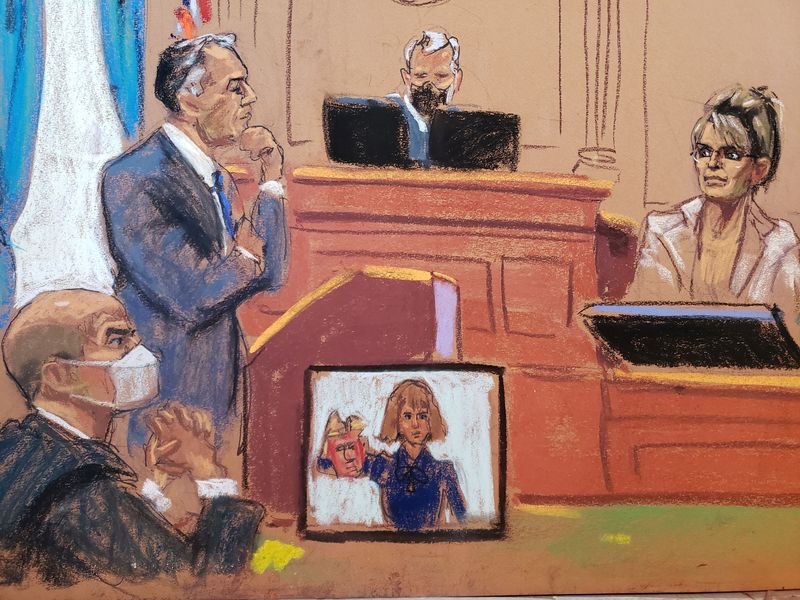 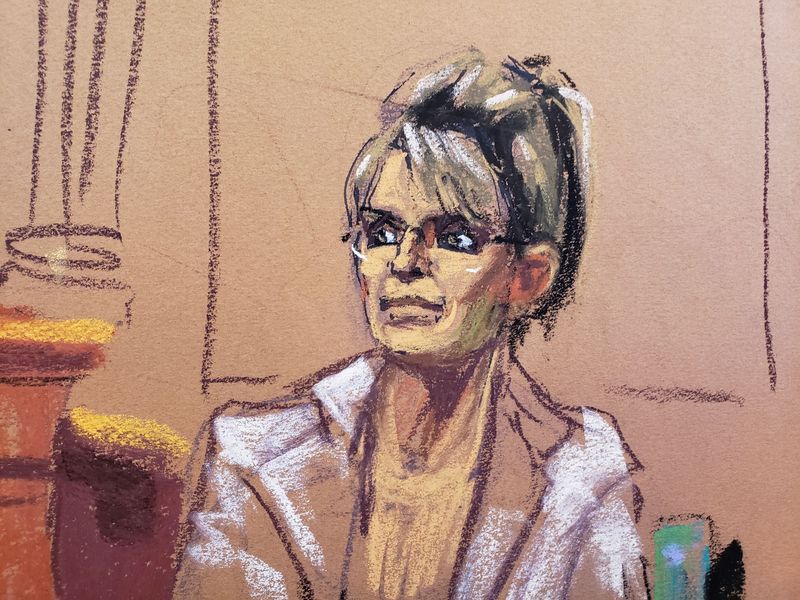