By Sruthi Shankar and Shashank Nayar

The continent-wide STOXX 600 index ended 0.1% higher with oil firms and miners leading gains, marginally adding to the 1.4% jump on Tuesday when Moscow indicated it was returning some troops surrounding Ukraine.

However, concerns lingered after the United States and NATO said Russia was still building up troops around Ukraine and Kyiv appeared to blame Russia for a cyber attack.

Shares of Ericsson fell 14.2% to be the top STOXX 600 loser after the Swedish telecom gear maker disclosed results of an internal investigation that detailed suspect payments and misconduct in Iraq.

Riskier assets have been hammered in the past weeks, with volatility gauges jumping to January highs on fears that Russia will invade Ukraine, while surging oil prices added to inflation fears.

“A lot of it (risks) seems to be in the price, but we would not make an investment decision based on a geopolitical event,” said Frederique Carrier, head of investment strategy at RBC Wealth Management. “Historically acts of war tend to have relatively short-lived impact on markets except if it is an oil crisis which itself triggers a recession.”

Swiss elevator maker Schindler fell 5.2% after warning that its China business will contract in 2022 due to construction delays, material cost inflation and supply chain disruptions.

Overall, European earnings have been largely positive, with analysts forecasting a 58.6% surge in fourth-quarter profit for companies on the STOXX, as per Refinitiv IBES estimates, revised marginally higher from the 56.2% forecast earlier this month.

Heineken gained 1.8% after reporting stronger than expected earnings in 2021, but it cast doubt on its mid-term profit margin target due to the uncertain impact of spiralling inflation on beer consumption. 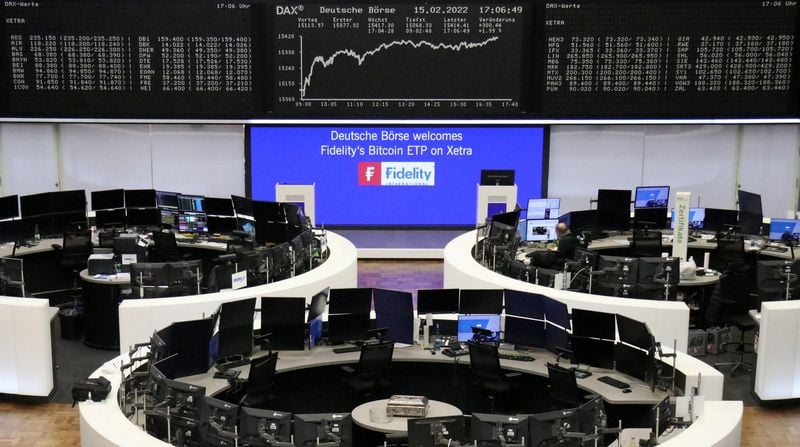